I would like to see a new Temple (Shrine) building for all native civs, and a way to have them hire Mercenaries.

Haudenosaunee a new building where they can hire Renegade Europeans
Lakota just get a Saloon. For them the high pop Outlaws might actually be worth it because they should have enough free pop in Age 2.
Aztecs Temple like described here.
Inca I think they are already relatively well rounded but maybe some kind of Temple too.

The Temple could also function like the Capitol and research the Imperial Age Technologies. The Natives also might need some new ones because they suck in late Imperial.
Maybe: Estate and Farm workers produce a small Wood trickle.

I also added Saloon to the Sioux. added the temple to the Incas , and the indigenous countries can call their own warriors in the main program to replace mercenaries.

No matter how you buff them, they are way too close to Inca’s. There is just no reason to play Aztecs when nearly all they can, does the Inca better.

Aztecs and Inca are less similar then the Europeans.

The 3 war hut units are similar but that’s it.
The other 3-4 units are very different.
Jaguar Warrior is a melee unit that is good against Infantry and Cavalry, the the Maceman is more siege than anti cavalry.
Eagle Warrior is Shock Infantry (countered by Light Cavalry) and is only good against Heavy Cavalry while the Bolas Warrior is Heavy Infantry (countered by Light Infantry) and is good against both Light and Heavy Cavalry. Bolas is more like Carolean.
Arrow Knights deal very long range ranged damage with strong modifier against Artillery while Huaraca deal much lower range siege damage and have no positive modifiers.
Skull Knights are more comparable with Maceman but have much sronger modifiers against Cavalry.

I’ve been happy to see Aztec getting touched with last Patch.

It’s a very nice first step into making them better, with indeed more diversity, without making them “broken” since they (apparently) have a very high winrate.

I still think Aztecs lack strategies, and for being a OTP with them, everytime I play against them, they’re so easy to read, and by just turtling/scouting, I win almost every single time against them.

This is why I will bring a few point from the last patch :

Now that said, please devs and game designers, consider another building for the Aztecs, the one in my original comment, the Temple.

Aztecs were very religious, and I’m pretty sure we can have something very amazing and fun made out of it !

Eagle knights are not countered by light cav though, only by skirmishers and archers.
Neither is light cav countered by other light cav. they have bonus damage only against melee cav (and melee shock infantry)

It’s again me on feedbacks with the Aztecs, and I can say that again, a new patch, and interestings buffs towards the SkullKnights :

I need to try this out, but on paper, with all the previous buff, it sounds like it finally justifies its “HeavyInfantry” tag

Yes! now we also have a native embassy that functions as a tavern and will allow us to train mortars! I know it is for all native civis but I feel it especially benefits the Aztecs due to their limited siege (only arrow knights)

Oh, I didn’t read that :o, that indeed seems to solve that issue as well ! That’s nice from the devs

now they will also have access to all mercenaries! it’s great 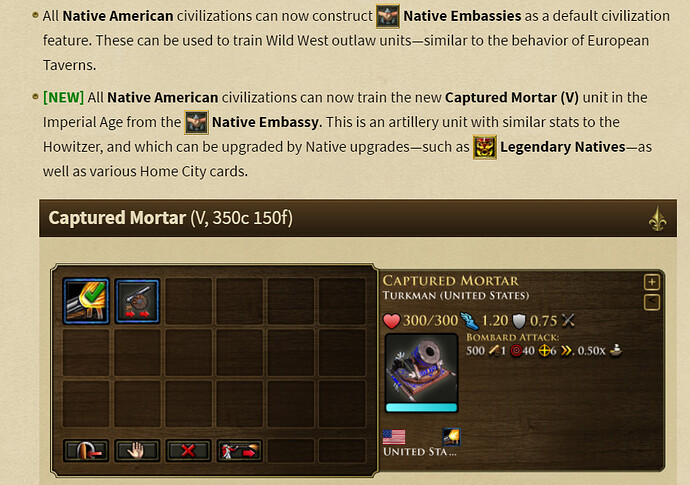 Aztecs have been nerfed again in last hotfix ?

I just realized last week-end that the Aztecs have been nerfed, and it wasn’t really shown. Here what wasn’t shown :

Where does this “creation time” comes from ?

I think since you create units 5 by 5, at maximum, everything that isn’t a mod 5 adds the actual creation time, and the time you lose of doing so. So in every single nerf, aside from the resources/unit stats, time matters so much too. Especially from an “Offensive Civilization”

Why does it hurt them even more ? The coyote

Well first, I don’t really understand the nerf on the slingers, but it’s “not as bad” as the coyote one. Aztecs need so much of their Coyote Runners in early. so this -1 coyote matters so much, and it’s at this point not even worth to the equivalent hussar card.

Coyotes are individual, and unlike an hussar, it dies faster. So when you have 1 hussard for 2 coyotes, if one of your coyote dies, you have “half of a hussar” (if that makes sense).

In the other hand, if an european civ, gets a hussar get to mid-hp, it would still do its maximum damage, unlike that 1 coyote. And that sucks.

Coyote dies faster to Town Center shots, and in some early they can die easily from 2/3 shots.

It has been explained in other forums that also players (and I) feel like Coyote don’t do well even against Skirmishers and canons, that is a high issue because Coyotes need at least 3 cards to be correct (Aztec Mining, Coyote Combat and the Temple Xipe Totec). That’s a lot of time required, for a unit that is key for the army of the Aztecs, and for a civilization that is “offensive”. It’s paradoxal yeah.

All those nerf impact them even more.

What are the Aztecs, offensive civilization that can’t do well ? They’re actually less offensive than a defensive and very similar civ that are the Incas. That sucks.

If you get to read all my messages and answer in this post (which I invite you to do), I really liked the love that was put into the Aztecs recently, but this nerf makes no point.

For example, the Age 2 time spend that was buffed two patch ago from 90s => 70s was really great, but because of (indeed) very strong SkullKnight age2 rush, why not just nerf this age up option ? It was really great to have other options than the “Fast Age Up” into “700w or 3warrior priest”.

But now again, we’re back to have less options. 5 coyote shipment is not great at all. Less Macehuatlins is a bit of an issue, but on top of that, that hurts.

Don’t forget that the Aztecs, since DE unlocked all shipments, there is old cards that are there and that are so useless. It contributes by a lot their lack of identity/options.

For example, look at that age2 gold shipment :

What to do then with the Aztecs ?

Define their “offensive” identity. Why is it an issue Incas do so much better when the Aztecs are the one that are “offensive” ?
Incas have a strong economy, their high cost unit is okay since they can still produce villager and produce military, have a lot of buildings so it walls their base.
Aztecs don’t have a really strong economy until midgame/lategame, and after a lot of cards.
Is it really what an offensive civilization looks like ?

I would suggest a sort of deep rework of the civ :

I think they are looking to nerf the Aztec rush, at the moment it is one of the most powerful and fastest in the game, to encourage players to do other strategies.

Yup, that Skullknights age2 rush was too strong. It’s a totally derseved and fair nerf.

But I don’t get why they nerfed the others choices then.

It was pretty nice to get a free barrack and aging up 20seconds earlier, now it’s just too slow and you’re forced again to choose your “Fast Age Up”

How do you rush with them?

I think that the way they are, they are fine, it was very frustrating to play against Aztec and know that they were going to rush or do a skull FI, now in ranked I only find Aztecs, Russians and Chinese, they all do the same over and over You see, I almost miss seeing Swedes and Japanese people. Compared to the past, the Aztecs are much better now and that is appreciated!

I don’t know, every time I play against Aztecs (or if I play them), it’s so obvious to scout on them to punish them hard

And yeah, every strats with any civs can be scouted and counter, sort of, but in the case of Aztecs, they don’t have a strong eco behind this to allow them to lose their all-in.

I think Aztecs win greatly because players don’t know how to play against them, and this would explain why you almost never see them in tournament, and why you don’t see them in higher elo. If you play or played Age of Empires 2 I would compare them to Goth, where everyone think they’re Over Powered, but in the end it’s just a “newbie crusher” haha.

That said, I wouldn’t mind their strong age2 being nerfed a bit, if they in the end give more strategies to them.

Well, in fact, those problems that you are telling me, are in general of the native civilizations, I am main Inca and Haud, when I play against Europeans, they raid me, they rush me, they take out falconets, and it costs me much more to repel them, why not I have proper artillery and cannot easily call militia, etc.

In short, in my humble opinion, it is not a specific problem focused on the Aztecs, it is a general problem in native civilizations. It can not be that I touch a Dutch, and the guy takes 5 falconets protected by 30 ruytiers or more reaches fortresses and does not even have a unit capable of destroying them from a distance!

Yes, you got my point.

And I still think Aztecs are the worst of them. Chimu runners can’t be snared, Haud have mantelet or falconnects + riders, etc…

Meanwhile Aztecs have Arrow Knight that are super slow, 2 pop and super long time to load an attack

Well, in my personal experience, if you defend the cannons well, the chimu will never be able to touch them, they are in the same condition and condition as the coyotes. The only alternative is to use huaracas, which have the same problem as the arrow knights, but it is to emulate culverins. On the other hand, to obtain cannons with haud you have to go to Industrial, and the mantles are not effective to destroy artillery, but if they are protected with masses.