I wanted to create this thread because the civilization currently have many flaws that makes it nearly Impossible to deal with in top level games.

Aztec hero can be revived in 10-15 seconds while tanking 40 musketeer shots 5 times, which makes the unit unbeatable and prevents aztecs from taking any engagement

Warriors have been significantly buffed in DE to make them useful against rush, but currently they are used to rush opponent players while never getting actual engagements.

Arrow knights have 30 range, but still has a decent ranged damage that allows the unit to be abused from far away easily, ideally it should have it’s siege and anti artilley damage stay same while having an actual bonus against other units.

This is a serious issue, and since you don’t gain anything from killing minutemen, one player can keep losing half of his army while the defender doesn’t lose anything at all.

These are making the game less competitive and uninteresting at top level, Hope devs will take those into consideration.

Dude aztec is not OP in the least bit. If you cant beat them go watch some guides on youtube. Everyone keeps making these posts on the forums complaining about civs that are not OP but they get beaten by them once with a strategy theyve never seen and suddenly the civ needs to get nerfed into the dirt.

If someone builds a forward firepit to send warriors at you, abuse them and kill whats on the firepit, its really not too hard. Those warriors have a max cap and go down to 1hp over time.

I agree with almost everything, except with the AK, I think it is the only balanced unit that the Aztecs have atm 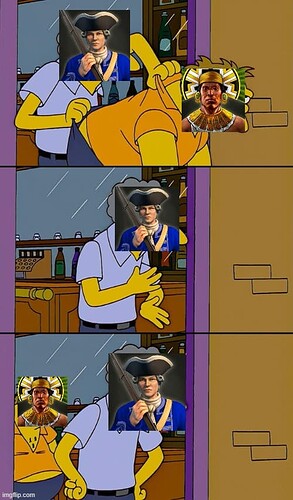 Every enemy civ is OP except when I play them

Except Japan, pls nerf. Oh, well and Inca. And we should talk also that dirty Spanish logisitician…

For real, jokes asides now, maybe warriors should give a little of xp, that’s my take. But a native player is losing village time into a community plaza, is not for free (if he sent warrior priest, he lost shipments)

Tbh, the Aztec warrior spam is broken, most if you send fencing school, there are even players who build the community plaza very far from their base to abuse that mechanic.
Preventing the fencing school from affecting the square would be enough. Although personally, I would like the warriors to work like the normal mnutemen, that you put the ceremony to work and give you the 6 warriors at once and take a while so that they can be summoned again from the plaza.
This would be a nerf for Aztecs but an important buff for the other 3 natives, it is desperate to place that ceremony and that the warriors do not spawn fast enough and that the enemy takes advantage and kills villagers who are in the plaza.

Basicly Age2 rush doesn’t ever work because minutemen spam holds any sort of it, age 3 ff push is a risky bet and once 2 falconets die aztecs win the game again, in late game there is nothing to do against forward firepit dance into mm spam.

Just found the comment a little bit undeserved since you are saying it to one of the best 1v1 player in the game who is trying to be reasonable with his statement regarding a clear balance issue.

Aztecs are far from be OP guys. Players spent valuable seconds training warriors on the firepit (if you have could spam WP). Also aztecs are bad as hell switching to estates while you need wood for coyotes (or coins from estates, i dont know what is worse)

AK…they arent that good, in my opinion they should get a bonus vs light infantry at least in imperial (aztecs dont have canons).

Could you please download and watch this recorded game? Because I want to make sure it’s an objective call to say it broken, otherwise we are not discussing the same topic.
Record_Game(1).age3Yrec (7.3 MB)
h

It’s ridiculous that that function better offensively than they do defensively. Needing to have your villagers exposed to make them one at a time really hinders the defensive capability. Buffing their strength to compensate just makes them better for attacking.

On a similar note: Does anyone actually make the African Levy units? I find I never have influence to spare for them and their one by one training is also a big drawback. They’re also very uninspired with names like “Levied Spearman”.

On a similar note: Does anyone actually make the African Levy units?

I have a couple of times but I agree it is hard to have the influence for it unless you are stacking it for a shipment/tech. You can train them in batches if you select multiple houses or select all houses. I believe they also shadowtech so that is kinda nice. It is pretty off topic tho.

Warrior spam looked annoying af, outside of fights though it’s quite useless as they do 0.25x against vills and are constantly dropping to 1hp.

As for the actual match, brit went too heavy on eco. Double the vills all game but a mass of 60 musk against 60 ERK’s and 30 AK’s, you’re just never going to win that. I did see brit start to train longbow towards the end but it was too late by then, I imagine if half of those musk were longbow the result may have been different but still aztec had far more military pop because he had half as many villagers. Too heavy on eco and training pure musk most of the game vs ERK/AK mass seemed a mistake.

It seems to be annoying to play against, but I imagine there are ways around most stuff. Perhaps a few spies to deal with the explorer? Move them forward as he pushes in alone, they do 40x damage vs explorer. Perhaps not ideal but the game wasn’t lost because of the explorer, it was lost because it was 60 pop of pure musk against 120 pop of ERK/AK. Could have been any units and still would have lost.

Arrow knights are pretty trash in general, I’ve seen a few lame strats where people abuse the range but the unit is on the weaker side for 2 pop.

Only thing I do agree with is that the warriors should give you xp, perhaps any made after the first 6 give xp.

After seeing that Rec, yes, azzys needs a good nerf in their community plaza tbh, ngl.

Really? Why nerfing Aztecs when they need buffs instead?

They have never been in top tier, and that’s a reason they are not used by most pro players in tournaments.

Nerfing gimmicky stuff like the War Chief respawn and warriors is a good thing. Other buffs can be added to compensate removing cheese strategies.

Hmmm, being English and allowing Aztecs to boom and make a forward base doesn’t seem like a good idea.

Dont touch WC respawn, it is the worse of the 3 originals: he hasnt got range attack and his aura doesnt buff units while lakota for example buff most stats. Also He doesnt revive as fast as european explorers neither while he needs to walk to battlefield.

About plaza, is the only f#### bonus of aztecs because their other gimmicks has been eclipsed by other civs.
If aztec player move the plaza next to your base just kill the villagers/WP or take down the plaza. Respawn WP is a nightmare for azzys.

I dont see complaints about russian blockade or similar strategies.

I kinda agree on the minutemen rework, in that its either kinda too strong or a bit ■■■■, I dont mind the idea of them spawning a batch at a time, though we could just reduce the cap of their spawn, given that they are a kind of infinite spawn unlike normal minutemen where its a one-off.

You don’t need bs gimmicks to address these issues. Warriors are obviously intended for defense just like Minutemen so changes should be made so they are actually used that way. The Aztec Warchief could get a better aura to compensate for other nerfs.

If you cant defeat 1 HP units maybe the issue is not the aztec civ.

You don’t need bs gimmicks to address these issues.

Whats their gimmick if not a stronger plaza?? Lets say me.

If you cant defeat 1 HP units maybe the issue is not the aztec civ.

Where did I say that I couldn’t beat it? The strategy isn’t great and mostly relies on intimidation.

The problem is that using Warriors offensively goes against the spirit of the unit. They’re obviously meant for defensive use like minutemen. But they way they’re currently implemented makes them very poor for defending and marginally good for attacking. They need a rework to make their actual use line up with their intended use. This applies to all natives, I’m not trying to suggest something for the purpose of nerfing Aztecs.