? Why nerfing Aztecs when they need buffs instead?

They have never been in top tier, and that’s a reason they are not used by most pro players in tourn

Again, please watch the recorded game before making commentary about the mechanics the topic is talking about. Otherwise it’s looking more than biased right now.

Warchief tanks 40 musketeers shots 5 times alone, and with fency school you respawn it even faster when you can put your plaza in front while also spamming infinite mms that prevent actual units to take any damage, could you watch the recorded game? Because your arguments are far from being in a spot to discuss clearly, it’s not 1 hp unit that is making an issue, it’s an infinite unit spam which prevents aztec units from getting hit while arrow knights shoot from 30 range.

Aztecs of course have some good features unique to their civilization (tanky, revivable War Chief or strong defense with Plaza). This is balanced with some features which Aztecs clearly missing (lack of artillery, Noble Hut units without possibility to upgrade to Veteran, very weak economy). And they are generally much harder to play.

I’m 100% sure you will not be able to increase your ELO by playing Aztec exclusively. They seem strong but only until you play them yourself.

As I said several times, the topic is about specific mechanics around community plaza being clearly overpowered. If you do not read the topic or watch the record, then we are not going to be talking the same topic.

I didn’t watch your video yet but I read your post.
I’m just telling that if you remove/nerf those mechanics Aztec will be simply underpowered because they will not have much advantages left.

I’d rather buff spies to counter warchief lame.
Spies were buffed in DE already (5-6 in age ii, 8-10 in age iii etc), but they have to attack in melee mode, thus can’t really threat a warchief with mass eagle knights behind. It’s even ironic that they can’t fire in range while they’re holding a gun in their avatar.
I suggest to give them a short range (8 range for example) attack with less damage to heroes (just like hackapell into arquebusier riders in DE), and spy+skirmisher can become a special goon+skirm combo that counters warchief+eagles.

Aztecs do not need a nerf, I didn’t watch the video but if all your doing is spamming armies of musks as the British like someone said above that’s not a winning strategy unless your opponent is trash. They should have mixed some artillery in

I do think some change is needed here with Aztec. I can play Aztec into 1800+ MMR easily, while I can’t manage this with many other civs. Aztec is not a colonial civ now (their colonial unit shipments and unit combo are both TRASH), but their middle and late game are crazy. Eagle knights, buffed slingers, arrow knights, warchief aka Captain Mexico: this combo is unbeatable. Hausa unit combo is insane in this game already, but Aztec can beat them easily, even with full eagle knights.

Of course you can try to harass him in age ii, delay their priest boom, but it’s never easy to manage this in lower games. With a Jesus-like warchief and endless minutemen, it’s hard do really do some damage to them. And some clever Aztec players (I mean myself) are sending 2 war hut travois first, even top players may lose to this turtle build either. (Kevin lose to my Aztec twice too.)

I remember a game versus an Aztec lamer who did a naked priest boom, into fortress full eagle knights. I boomed a lot in colonial, go age iii, send 10 SPIES and SPY UPGRADE, with full Abus guns. Guess what? Spy doesn’t beat warchief because they do melee damage. You’ll lose 5+ spies to eagle knights to kill a warchief, and he revives after 10 seconds. And Abus gun even lose to eagle knights if I didn’t kite perfectly. Spy Abus lose to hero eagle: the unit counter system is broken here.

There were also a ESOC-patch game between Aztec and British (diarouga vs snowww I guess). Aztec just wall a lot and go age IV, and British can do nothing against eagle+slinger even with much better eco, fully map control. Hussar die like streets in front of eagles. Muskets lose to eagles (let alone slingers mixed in). Longbow? What’s that?

It is unbelievable how casual players try to undermine the arguments of pro players over and over again. But even worse is that the Devs fall for it. Most of the statements here are simply meme material like that of Original Knot

Also little bit offtopic but if you look back to the “Suggestions” for some Civ reworks then i cant believe that i play the same Game as those players with this non sense ideas.

Devs should not hear in the most cases of balance to low elo or casual player otherwise we get such terrible stuff like Inka or Aztec.

@AgeOfAwesomenes I can’t discuss if you do not know nor realise how broken this mechanic is, and again, talking based on anecdote isn’t helping to any case here. Because simply none of those you listed work, what is the point of making artillery against 35-40 arrow knights?

So with regards to the warchief, I am only hesitant because it is such a historied strat in the game that I want to see it viable-esque in some form

There is a problem with the revival dance, especially as it also boost the warchief hp to like 4k iirc, combined with smoking mirrors and the splash damage, the war chief + slingers is a potent force dont get me wrong, even without that old cover mode bug where he also gets siege resist.

Maybe a way is to change the HP buff from a aura effect(which stacks) to a base effect, meaning even at best he should be like 2.5k HP 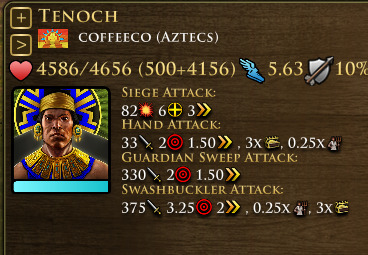 even before the instant respawn

Another potentially more out there idea is that the respawn only happens at TC, the problem right now is that the unit can be respawned at a forward very easily which makes it offensive

oh yeah the whole fencing school thing as well, that is no brainer.

Another slightly more out there idea is to make him like like the incan hero, make him heavy infantry, we can compensate for that with a small cav and shock infantry multi to make it thematically fitting.

but I want my stupid tank heroes, without it the chinese monk cant power pose ■■■■ out discpiple in the middle of battle and also get instant heal the moment he drops bellow 100 hp

it still would tank a lot of damage & would be more balanced.
China is super strong atm, they dont need the hero in covermode tbh.
its a nice idea to give him a unit tag, but the main issue is traintime & covermode

remove covermode from all heros

Defenitly no, its a must to indians, aztecs amd chinese to train pets to not lose the auras. Guess that, all of them attack at melee

What a great idea, another heavy infantry unit for aztecs…

Defenitly no, its a must to indians

indian heros are not infantry, they dont have cover mode

pretty much agree with what breeze is saying here, and it doesn’t happen often lol