Barbary States as a playable civ - more real than it looks

Have you noticed that apart from the playable civs only the Barbary States and Ethiopia (and USA) have an intro music.

Its so strange that the devs in October had the trouble in composing a music for a single scenario without just pushing it as a playable civ. The other two civs with music (ethiopia and USA) have become or are going to become playable civs.

Also the barbary states revolution is so out of timeframe - as far as 19th century revolutions go - and even their bonus like the looting part feels out of place (it looks like a begining of the game bonus).

My theory is that, just like the USA the devs were still developing the mechanics for the african/USA civs, hence they just hacked the civ into a revolution and put them in the historical battles, waiting for the right time to put them on the game as a full civ DLC.

This leads me to believe that when the african civs pop up we might get the full barbary coast civ as an add on like the USA or even in addition to the Hausa and Ethiopia.
(i know, i know, i would prefer morrocans, but hey why not use what we have to establish this civ - with nice looting mechanics ).

I think that, if the Berber units are going to be used for a base civ, it should be the Moroccans, and not some small segment of a larger political entity that is already in the game.

Also, a civ about Piracy that never actually set up any colonies, would be woefully out of place.

Well… you know… Morroco is a Barbary State itself. Barbary States was a name for a group of different and divers states in the Magrebh region. Its also false to simplify it to “they were protectorats of the Ottoman Empire”, since some of them were in a loose allegiance to the ottomans… and some were not. …and it changed all the time

Also a civ does not need to have colonies to be represented in aoe III… Barbary states would play the same role as every other african civ (obviously!) or rather like incas, lakota… since they fought against european (and ottman) colonization. The historical battle even refferences to the start of their struggle against european powers and in the second barbary war 1815 also the USA fought against them. So Barbary States is a pretty solid candidate, since they perfectly fit in the timeline, they where important for their era and regulary defeated great powers. …and they include Morroco

Lol, no.
It literally tells you that the Barbary Pirates were the aggressivve party, and that the Spanish were there to try to stop them from raiding Europe.
It was not a heroic struggles, you are literally fighting on the side of a looter and slaver.

But it would be much more in line with the other civs in the game, not to mention taht Morocco was an actual EMPIRE in this timeframe, under the Saadi dynasty.

Including the Barbary States and NOT Morocco, would be a super failure, on the part of the developers.

and they include Morroco

No, they do not. Morocco was it’s own political entity.

Dude… there is nothing to argue about. Its like in the first 1-3 sentences of every wikipedia article. Morocco was part of the Barbary States.

(only the english article says “sometimes Morocco”,others like the german one say “especially Morocco”; but none the less Morocco was part of the barbary states)

Lol, no.
It literally tells you that the Barbary Pirates were the aggressivve party, and that the Spanish were there to try to stop them from raiding Europe.

its no contradiction. They had opposing interest, spain tried to continue their “crusade” against muslims and they were muslim pirates, that didnt want to be part of spain. “Refferencing” does not mean to be 100% precies and the historical battle is definitivly in favor of the barbary states, since you play as them.

Yes they should and likely will add Morocco.

Morocco was obviously also involved in piracy so it makes sense to give them Pirate mechanics like home city cards.

Morocco is the most natural choice. Especially because AoE3 prefers real existing countries with official flags and everything (besides Germany and India) over umbrella names like AoE2.

All the civs in AoE3 are nations, and the Barbary States were not a nation.
Morocco was a nation.

Nations didnt even exist in most of aoeIII’s time frame. The theoretical concept of Nations exists In philosophical works of european Scholars in 16th century, but the first real Nation is the (First) French Republic. Also Barbary states is literally defined by their Population; Barbary = Berbers → Most basic concept of a Nation. They are as much a nation as Germany is in aoe. Also the russians and ottomans are multi ethnic empires, that dont qualify as nations.

“Most theories see the nation state as a 19th-century European phenomenon, facilitated by developments such as state-mandated education, mass literacy” -wikipedia

Edit: having India, a whole subcontinent with divers peoples, in aoe proofs your statement wrong.

hm i didnt know there was a difference in english; in my native language “nation” is the theoretical/idealistic idea and “nation-state” is the practical implementation. But either way it doesnt apply to morroco, since they were majority berbers with a ruling class of arabs… and the biggest difference between tunesia, morocco, algeria etc. was the ruling dynasty

There is a simple solution to this, just call the civ berbers.

The Barbary States were under Ottoman sovereignty, they are for all intents and purpose part of the Ottomans civ. The only kingdom in the region that was independent was Morocco.

Morocco was part of the Barbary States.

On December 20, 1777, Sultan Mohammed III of Morocco issued a declaration recognizing America as an independent country, and stating that American merchant ships could enjoy safe passage into the Mediterranean and along the coast. The relations were formalized with the Moroccan-American Treaty of Friendship signed in 1786, which stands as the U.S.'s oldest non-broken friendship treaty with a foreign power.

Barbary state wasnt like the name suggest a state, it refers to a region in NorthAfrica the barbary coast, just like the middle east is a region.

Morocci definatly is part of that region, but the barbary state simply isnt a nation hence why it cant be in the game (its about people groups anyways we shouldnt argue about nation names) so Berbers fit perfectly.

The Barbary States were under Ottoman sovereignty, they are for all intents and purpose part of the Ottomans civ. The only kingdom in the region that was independent was Morocco.

No. Read at least something about the topic you talk about, before responding to posts. Barbary states is a (european) collective term for muslim, piratestates on the barbary coast - they them selves never identified as barbary states. 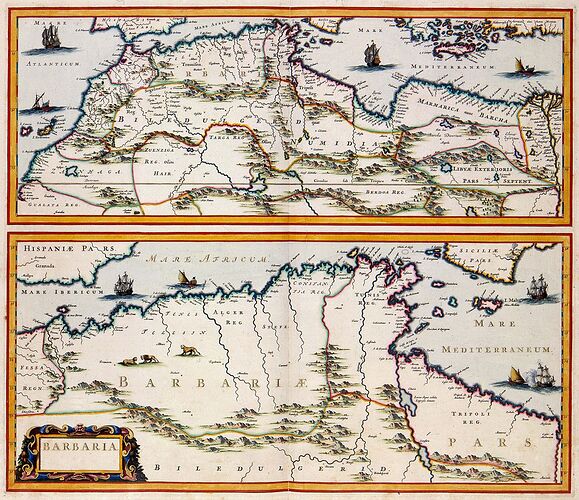 Since Barbarystates describes multiple entitys, you cant say “they were under Ottoman souvereignty” when they loosely controlled Tunesia, Algier and Tripolis from 1518 - ~19th century (Algier only till ~1650) and other barbary states were still independend (Tlemcen 1554, Morroco, etc.).

On December 20, 1777, Sultan Mohammed III of Morocco issued a declaration recognizing America as an independent country, and stating that American merchant ships could enjoy safe passage into the Mediterranean and along the coast. The relations were formalized with the Moroccan-American Treaty of Friendship signed in 1786, which stands as the U.S.'s oldest non-broken friendship treaty with a foreign power.

the US had like the exact same treaty with Tripolis: Treaty of Tripoli - Wikipedia

Non-Moroccan Barbary States are already in the game, it is the Ottoman Empire, because that is who they were under.

Berbers dont only live in Morocco and it is not the point, Barbary state isnt a thing it refers to barbary coast which is an area, like I said just like middle east, thus it cant be a nation, but like I also said we shouldnt argue about nation names as it are people groups, thus Berbers make totally sense.

Makes less sense than Saadi dynasty Moroccans, for this game.
We have Spanish and Portuguese, not Iberians, and Swedes, not Scandinavians.

Yes, you do have Germans and Indians, but the Indians are just the Mughals really (all units are from the Mughal Empire and associates), and the Germans are the only composite civ (more than one nation) in the game.

AoE3 is based around nations, to which besides Morocco, the Barbary States were Ottoman protectorates.

It does not matter how multi-ethnic any civ is in this game, it is clearly defined by state mandate, and all the Barbary States, outside of Morocco, were part of the Ottoman state.

Berbers are a culture group just like Sweden, Scandinavian is a group name.

And no all civs except for the US is people groups not nations, ofcourse they are based on the nations they were from thats only logical, berbers however are the majority people in Morocco.

Nations didnt even exist in most of aoeIII’s time frame.

What do you mean exactly, nations existed thousands of years before the time in history AOE 3 takes place

AoE3 is based around nations,

Exactly, It called Age Of Empires Not Age Of People Groups