Batch training not in the game?

I see people talking about ‘batch training’. That’s like in 3:DE you hold down shift and then can train five units at a time (or however many you have resources for).

That’s what they’re referring to, yes? If this feature is NOT in AOE:4 then that is… not good.

Batch training is the core mechanic I use in all my 3:DE games. ALL OF THEM. I can’t believe they left it out of 4. Am I mistaken here, is it in the game or not?

I think one civ can do that, in IV that is, it was in one of the pre-release test builds, prolly mentioned below Mongol civ.

That is a larger problem, or rather big design direction of the entire gameplay, and batch training is one part of that.
I’d also prefer to be able to train units like in AoE3. I hate spamming production buildings, it’s boring, lame, clunky and makes base building a MESS. It’s made worse by rather bad camera and scale of buildings in AoEIV.

In AoE III you can even train in batches of 10, at least for Japan with Bushido consulate tech (available through isolaitonism)
Bushido Principles | Age of Empires Series Wiki | Fandom

I’m not sure what you mean. It definitely exists in this game from what I’ve seen. The batch training mechanic also optimizes for how many production facilities you have selected. In other words, 4 barracks and shift training a batch of spears causes 1 to train 2 and the others to train 1 each.

Mongols can produce 2 units at time if the building is in their Ovoo influence radius. Burgrave palace for HRE can produce 5 units simultaneously. Other than that, military buildings produce 1 unit at a time. So you need to manage ramping up your production by building multiple barracks/stables/archery ranges when you can.

In other words, 4 barracks and shift training a batch of spears causes 1 to train 2 and the others to train 1 each.

That’s not what it is.
Batch training refers to the ability to simultaneously train a larger number of units at the same time, from one building.

Yeah if this is what’s meant by batch training then yes, only a couple places actually produce all the units simultaneously.

Salutations! Actually there is a civilization that can preform batch training. It just so happens to be a more specific and special ability as apposed to something everyone can do. Landmarks which create “armies” create groups of units for free in batches of 5. In fact batches of 5 seems to be the keyword here.

Burgrave Palace: Acts as a barracks that produces infantry 5 at a time

It would appear that this game not only has batch training, but makes the concept more unique and powerful by only letting certain civilizations preform the action.

You can shift+hotkey to queue up 5 units at once but they get created 1 at a time, not 5 at once.

When people refer to batch training they are talking about being able to spawn 5 units from a production building at the same time.

If that’s your main mechanic then don’t play AoE4 and stick with AoE3.

Enough bugs need to be fixed in multiplayer for this topic (and other minor ones) to be relevant.

They should either add batch training or reduce unit production time . Because currently it takes too long to train armies

I think this is the main strategic element of aoe4 right now and there’s a lot of bonuses geared towards it. China and dehli would be bottom teir if they speed up training times.

Well it’s really annoying. And I hate the fact that if you lose your army and your opponent is near your town basically your toast because it takes so long to build troops even with lots of production buildings

Batch training is the core mechanic I use in all my 3:DE games. ALL OF THEM. I can’t believe they left it out of 4. Am I mistaken here, is it in the game or not?

Technically it is in the game. If you play HRE and build a specific Landmark it acts as 5 Barracks and you can build 5 units at once. But only 5. Not queue 1 and then add another 4 later on.

Otherwise, if you want to queue 5 units at once, you need 5 barracks.

What you can do is press shift+unit hotkey and put 5 units in queue. But the building will still only build 1 at a time.

HRE and build a specific Landmark

Yes that is the Burgrave Palace I mentioned earlier in this thread. There are actually quite a few landmarks that spawn free armies over a period of time, which trains in batches of 5, you just can’t control it and sometimes the units it trains are randomized.

When I saw the official trailer, it seemed to me that the Chinese created units in batches, but when I played the beta I saw that it was wrong. 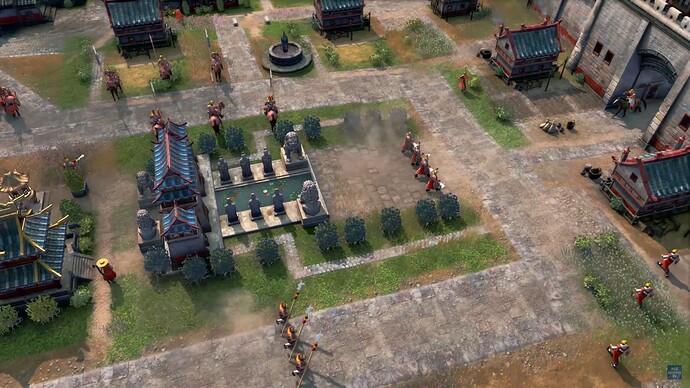 The creation of individual units should only be for the artillery, ships and villagers. The cavalry and infantry could be created in batches.

I much prefer how it is here: the perk of a powerful landmark or a unique civ feature like the Mongol Ovoo (allowing you to spend stone to batch-produce two units from a structure, even villagers). It requires foresight and an inkling of planning, on top of the obvious need to better manage and guard larger swathes of the map because of the increased macro footprint.

By no means is this a game where not being able to batch units 24/7 prevents one from quickly training armies or from re-maxing quickly.

There must be an upgrade to produce 2 units at the same time on any military building, I gate the SimCity that you get in tier IV…

The game is intentionally designed that if you want to accelerate production, you need more production buildings. That’s not going to change.

At least the map doesn’t seem empty. It also serves a purpose psychologically, because by building a town, you are more likely to feel personally invested in it, which means you will want to defend it more, and are likely to play the game longer. It’s also satisfying to destroy stuff.