BE careful about New updates/changes

Hello everyone. A new AoE2: DE update just came out, but I have been thinking about writing this post for some time.

Basically, I just want to warn that new updates and changes may not necessarily be for the benefit of the game.

Now, it may seem to you that I am just sounding pessimistic. Do not get me wrong: I love playing Age of Empires 2, and I do want certain changes of my own to be added into the game.

However…I am well aware of the consequence of adding too many changes to a videogame. I used to play a videogame called World of Warships (developed by Wargaming) a game where you take command of individual ships and fight in WW1-WW2 sea battles. I have since left that videogame because of 2 major reasons: (Reason 1) the game devs of Wargaming screwed up that game by changing too much with constant buffs, nerfs, and changes that just made the game unstable. One month your favorite ship to play in the game might suddenly be nerfed, making it undesirable to play and have fun in.

(Reason 2) such sudden changes to the game made the player base literally turn against itself. The WoWS community is one of the most toxic communities that I have ever seen…and it got so bad that I had to leave the game.

I am very thankful that the AoE2 community (or the whole AoE community for that matter) is still quite reasonable and thoughtful in the forum discussions and during gameplaying.
However, there have been a few posts that I see on the forums that are of players who vent their frustration and anger that, “oh a certain civ did not get a buff, or oh! another civ was not nerfed because they must be nerfed, and I am so angry about it!” etc. etc.

This worries me, because I do not want to see the community turn toxic like the WoWS community has. I do not think that we are at that stage…but I just wanted to speak my mind in the dangers of turning toxic and abandoning reason for madness.

Game devs need to be careful not to be too careless in adding too many sudden changes. Of course, not ALL changes are a bad thing…I heartedly agree that every active videogame needs to be tweaked here and there to make the game as fair and relaxing to lay as possible.

But make no mistake: if you demand too much out of the game devs, you might push them into altering the game into something that can alienate its own player base, as Wargaming has done with WoWS.

To any devs reading this, I just want to say that the changes that you HAVE done already to AoE2 I think are well done and thought out, and I thank you for your work. But do please be careful not obey all the demands of the players: do continue to consider all proposals reasonably. Thank you.

I’m not concerned that much about the lack of balance changes, but more about the lack of progress on fixes of some bugs which have been present for months. The upcoming patch is gonna manage to fix the Farming Bug, which is great, but 1 real bugfix per month doesn’t really make me believe they care about the game as much. There are countless of reported bugs on the forums, standing here for months, and seems they just deem them all not worthwhile to fix.

Fixing bugs is a great thing, and I do hope that the game devs work on fixing bug all the time.

In fact…I would not mind is fixing bugs is literally 90% of all the things that they do, as I think that bugs ought to be the highest on the priority list.

My main fear is that the game devs will feel pressured into adding too much unnecessary content and “balance” changes.

Which is the reason of why they stopped releasing balance for a while, at this state AOE2DE is in a clearly good balance point.

Sometimes devs decide that some bugs should stay in the game, even if those sometimes ruin experience for people. Some bugs stem from core mechanics of the game, and fixing them is garanteed to create a number of new bugs. Some bugs are rather rare, relatively minor, and too difficult to track and fix, therefore, devs decide to focus on other, more urgent things.

A new AoE2: DE update just came out, but I have been thinking about writing this post for some time.

Is this true? Where can i find the patch notes?

I think he means the new one announced but not released yet.

I think you should not worry about the balance. Now it is very good, there are at most 3-4 civs needing a small (or even very small) tuning.

But even without a further balance patch, the game will remain decently balanced.

Also, it seems to me that the devs have properly fixed some civs (vietmamese for instance) in a perfect way such that they do not need any additional buff/nerf

I love the OPs thoughts. Honestly, so many games are simply not fun due to how ornery the groups get.

All competitive games have to keep balance changes from time to time to change the meta and not to get stuck.

This game wasn’t that bad in AOC cause only 5-6 civs were dominant while the other were pretty much around the same, every single new expansion added new units, more techs and more bonuses, they added cumans before fixing burmese or malay, those 2 civs were banned most of the times in any previous big tournament, so the meta for those civs is still open, well with burmese you have only seen the arambai meme strategy, but you haven’t seen his monk rushes in action yet.

Adding more OP civs and units have literally broke the balance with the old civs, to the point that koreans have got more balance changes than any other aoc civ and still far away from being close to the top civs.

DE changed mechanics that the older versions didn’t have, like xbow being so Strong, pathing making melee units weak, CA and HC are so bad in DE that no one uses them, heck even monks were doing insta conversion during the first 2 months, so i am sorry mate, but we are still far away from a sweet spot in terms of balancing. 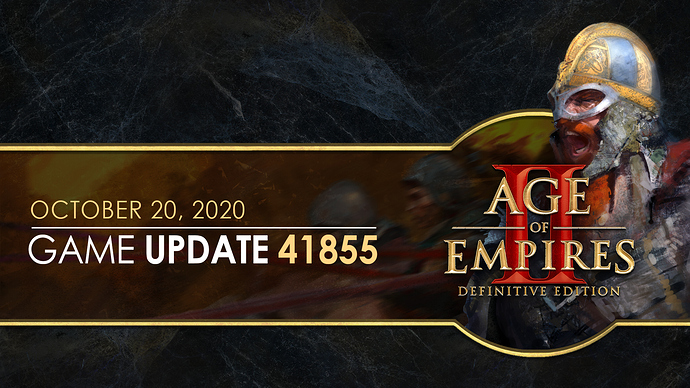 Today's build focuses on some key Villager improvements identified by the community, AI improvements for hardcore players, and some audio fixes that benefit the modding community.

DE changed mechanics that the older versions didn’t have, like xbow being so Strong,

imagine thinking Xbows weren’t strong in the past.

this isn’t an intended change, and they are working to fix it with every update.

only one of the new civs could be considered a solid civ right now.

to the point that koreans have got more balance changes than any other aoc civ and still far away from being close to the top civs.

Koreans have never been a strong civ, at best being resorted to a trushing civilization. they made a good ally because of onager bonus but that’s about it.

false. your options were basically Huns, Possibly Meso for some variety, and Vikings on water, that’s about it.

DE changed mechanics that the older versions didn’t have, like xbow being so Strong, pathing making melee units weak

Did you watch recent KOTD3 tournament? if xbows are that strong, why archer civs except Britons are rarely used (Mayans are more eagle civ) and Britons got 3-15 score? Pathing almost fixed and we can see archers are easily destroyed by knights and eagles.

CA and HC are never changed in DE. CA are also used by some civs like Mongols/Huns/Tatars/Turks, and HC are used when countering certain civs like Goths and Meso civs. Some units such as archers , pikeman, and skirms, knight are used in every situation, and some units are used by only certain situation or civs have bonus on that unit. I think it is not a “problem” just design of the game maintained from the release.

As earlier one pointed that, only Lithuanians are considered a solid civ among the new civs.

If you don’t add new stuff like new civs, campaigns, scenarios etc. even for a price tag, your game gets stale.

I completely agree though that they should be careful when it comes to balance. Some of the suggestions here are over the top.

So, is this the new balance patch? Despite it seems to have no balance changes again, the wheelbarrow fix seems to be an indirect nerf for Vikings, Khmer, Aztecs…

Well I think the devs have already taken this into account which is why we have quarterly balance changes.

They said we get a big balance patch next month.

Koreans have never been a strong civ, at best being resorted to a trushing civilization. they made a good ally because of onager bonus but that’s about it.

Laughs in 2012 where everyone picked Koreans all the time