Some ground rules. Post IMP, full upgrades. No hero units. Only standard units a civ can make in a normal ranked game. Other than that you can pick whatever civ and unit you want.

Replaced the champion with your chosen unit. Who would you pick on the small island or the big island to act as your champion in this 1v1 duel? On the big island you have room to move your unit and kite whatever you’re facing if you are using a ranged unit.

Edit: You are blue player. Red will randomly dice roll what his unit and civ he will be. But you can choose. 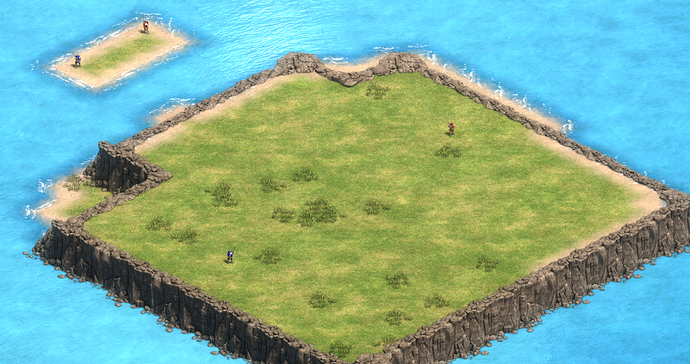 Small island: Elite War Elephant, probably.
Big Island: I don’t know. There is some rock-paper-scissors going on. I’d be tempted to pick the Elite Camel Archer. It probably gets beaten by the Elite Rattan Archer, though.

On the small island, I choose a War Elephant. On pure 1v1, it crushes anything.

On the big island, I’d say the Camel Archer, on account of having self-healing. With a perfect hit-and-run, it can wear down other units while shrugging off lucky hits.

Yeah, I think the first two people may have actually solved this. Even a monk or a siege onager or something has probably worse odds overall.

On the small island, BE or WE will probably beat everyone. On the larger islands, they will get beaten by most ranged units due to micro.

Big island is monk. Will convert prwtty much any unit

If it’s an Aztec Monk against any civ that doesn’t have Faith, then yes.

Hey @LightCav1413, is this supposed to a troll post?

No, I am serious, Mameluke can kill any unit in 1v1.

Dude, you promised to be good.

For the small Island an Elite War Elephant is easily the most powerful unit with over 600 HP it’ll kill any unit in the game. It’s hands down the most pop efficient in the game, but its production costs (cost of unit, time to train, cost of upgrades) makes it prohibitive to employ in most scenarios.

For the large Island I’d say the Elite War Wagon is the best unit. It’s a highly pop efficient unit with a lot of HP and pierce armor so it devastates any ranged unit out there and it’s fast enough to kite higher HP melee unit or anti-archer units whereas no faster unit in the game will be able to defeat it 1v1 or kite it well enough.

I think it dies easily vs heavy camel riders and knights line though, they are all faster.
It also dies vs Elite Elephant archer.

What about the missionary?

less range, means it already loses time on that.

It needs a buff then.