So yesterday I dig up and rewatched this old classic SOTL video. 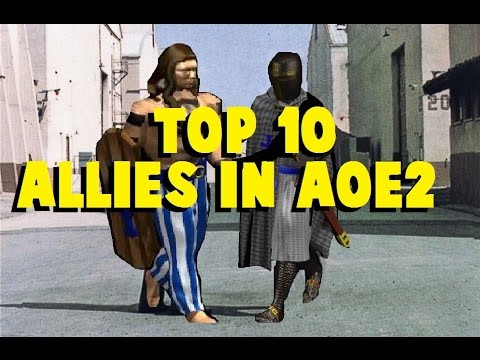 And it made me thinking, since that video were added about 12 civs (AK, RoR, LK expansions) and most of the other civs received a ton of balance changes.

So, up to now, using the same criteria that SOTL used, so team bonuses, tech trees, the ability to cover each other weaknesses or to execute a powerful one trick-pony-strategy… what would be the best allied civs?

I’m curious to hear you opinion, ideas and suggestions about this.

For now though, to avoid confusion, let’s start with combination of only 2 civs at the time.

Ethiopians with Khmer ally
Mayans with Saracen ally
Berbers with Indians ally
Briton, Bulgarian and Malian bonuses are flexible with any archer civs.

Ethiopians with Khmer ally
Mayans with Saracen ally
Berbers with Indians ally
Briton, Bulgarian and Malian bonuses are flexible with any archer civs.

Ok but justify why? Argument each of them more, so it’s more fun.

Ok a bit situational but yes their damage output is increased…

Well, that was already known, but still counts.

Bulgarians and malians have simply good team bonus, and together they out-tech anyone.

Plus one is a really aggressive early civ, that can benefit a lot by faster BL, the other is more powerful from mid castle age, so can enter in the fray later on but with more power.

Nasty.
Or
Mayans saracens Portuguese + 1 of the other 2

What about alliances of only 2 civs at the time?

Because with 3 or 4 civs is easy, but with 2, that’s required more carefully planning.

But faster BL is it enough to justify the whole alliance?

Bulgarians and Malians seem better, one can rush early, the other boom and spam faster attacking knights in castle age.

Also that way the bonus is better spread over blacksmith and university.

Plus their tech trees compensate each other pretty much…

One have full ram/onadger/scorps, the other BBC, one have camels, the other hussars and Konniks, and so on…

Slavs ,goths and bulgarians. Really fast, aggressive rush. You save time in one house, all civs have faster barracks and faster techs from BS.

But what would be the civ that benefit the most from this? And what Civ would help the chinese the best?

although not necessarily the best power combos…

i would like to see magyar and britons (super LOS archers, faster trained CA for magyar)

And what Civ would help the chinese the best?

chinese would likely help slavs the most (best farming)

chinese have such a wide tech tree almost anyone would help them no? but probably again saracens for insane chook chook

chinese have such a wide tech tree almost anyone would help them no? but probably again saracens for insane chook chook

Yeah those chukos would chew through building like they would made of paper.

The tankiest for sure, but I would prefer malians/japs, which are better at raiding.

Are that good? It’s just double the damage…

The CIA of AoE2