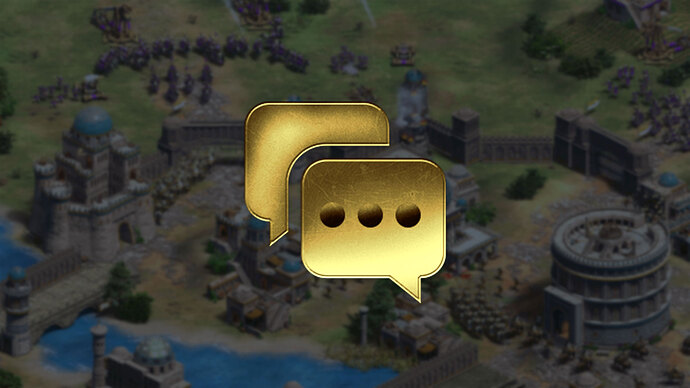 Will McCahill, our business and data lead at World’s Edge, is here with an important announcement about Empire Wars, Deathmatch, and the future of Ranked play. Please make sure to read the entire blog for full details! Thank you!

This is my first time doing an official blog post for Age of Empires so first, thank you so much for trusting us with this franchise. The reception for everything from the Definitive Editions, to tournaments, to the Age of Empires: IV teasers, have been nothing short of humbling.

I’m here to announce that we will be removing Deathmatch from the ranked queue and replacing it with Empire Wars in an upcoming patch. Believe me when I say this is something we take very seriously and I want to walk you through the logic and why we think this is the right decision for Deathmatch and the wider Age of Empires II: Definitive Edition community…

6 Likes
Separate TG rank queue and the elo from Duo and Solo
When EW in ranked?
Ranked DeathMode needs treaty
SeasondSloth May 11, 2021, 1:27am #2

Sound sick! Truthfully havent played this franchise since the old ps2 version of the age of kings, but this idea sound like it will work the charm, making new members at ease and more comfortable and giving them the chance to hone there skills and downpact there play style, great work guys

on effort, keep it upand bring it to xbox consoles please! so we can all get back to it haha

Honestly, the hype for Redbull Wololo was nowhere near to the hype of Deathmatch Worldcup.

Also would be great to remove Quickplay since it is same as ranked, except for Standard victory for some reason!

I wouldnt complain if lobbies had elo in de. DMer manages to survive HD, they lived on voobly too but their is one fundamental difference to de. Both these older platform had elo systems for their lobbies.

But now in de DMer have to play blind in lobbies. This s*cks sooo hard. The argument that they want new user to have a good experience first playing DM is just BS. Now I will join a DM lobby and don’t even know if my enemy is top 50 or first time DM noob. It will be pure ****, worse than ever before.

If there was lobby elo, per game mode, like how HD had DM specific lobby elo, then I woild 100% agree with the reasoning from the post. But since there is not, this is a affront to any DM fan. Which is sad, since it is the best game mode for some. And the recent tournament was epic.

I actually agree to removing the DM queue as it is just disfunctional at the moment.

This is want needs to happen to plese everyone:

Without these Deathmatches will be thrown into the dark ages, in a state worse than ever before.

I’m personally gutted to lose ranked deathmatch. I never found the wait too long and in most cases the games were fairly even.

I only every play DeathMatch and find it very difficult to get a game outside of the ranked matches. This change will unfortunately drive me away from this game which I enjoy a lot as I just don’t want to play other game modes.

I love the fact that EW is coming to ranked. I pretty much support that change. Getting rid of DM might be a mistake. My preferred option would be to have RM, DM and EW in ranked play. I have to say i dont really play DM. So for me it doesnt really matter that much.

In the blog you write about getting a good MP experience in ranked. DM doesnt fit this description as result of unbalanced games. Just to illustrate my point about unbalanced games, i want to quote some statements out of the blog:

There is currently also another issue why games arent balanced. This has to do with the following bug:

As results of this bug, the TG ladders are messed up. Elo doesnt represent skill. As result games are much more unbalanced then needed.

Since your starting rating on this new ladder also depends on your rating on other ladders, this mess on the TG ladders will transfer to the newly EW ladders (1v1 and TGs). As result the games on the EW ladder will also be unbalanced.

Please take the time to fix this issue as well, so we really can enjoy the new EW ladders!

Any ETA on this new patch? It is already 5 weeks ago you made these announcement?

Or are the devs still working on the fix on the TG ladder to implement in the next update as well?