At launch of DE, there were 3 OP things: Kipchaks, Steppe Lancers and Cumans. Within a patch, all of them were nerfed to the ground. As such, some of these nerfs in isolation would be small, but their conjunction was too strong.

Let us talk about Cumans themselves:

The patch also nerfed Steppe Lancers to the ground by:

Further nerf to Kipchaks: Added frame delay so the unit is harder to micro

I guess the major nerf Cuman Kipchaks needed are already present - frame delay and slower speed. So I want to propose some minor nerf and some major tweak to Steppe Lancer to make it viable.

Kipchak: Decrease RoF from 2.2 to standard 2 (it is still worse than what was at launch). Its dps becomes less worse, with the same micro ability.

If you look at the sum total of changelog of Steppe Lancers, it is a good amount of nerf:

With 1 range, the unit shouldn’t be affected by attack nerf against singular units like villagers and siege weapons, and small group of archers.

I am trying to enforce the light cavalry theme of cheap, lightly armored (melee) with low attack. I firmly believe that with these changes to SL, it will have a place in the game without being OP.

you look at the sum total of changelog of Steppe Lancers, it is a good amount of nerf

This is a terrible way of balancing anything. It doesn’t matter what was or what the net change has been

Decrease attack by 1, so what was in update

This is a net nerf. It becomes impossible to kill Vils in 4 hits in castle age. I would rather have the current iteration instead of this meaningless gold decrease, when food is the limitation

You also go from doing 7dmg to 6 dmg Vs kts (FU) that’s a big drop not made up for with a slight reload buff. The comparison gets even worse without atk upgrades

With 1 range, the unit shouldn’t be affected by attack nerf

Too bad you didn’t do your homework

This is a net nerf. It becomes impossible to kill Vils in 4 hits in castle age

I don’t see why that’s necessary? Is a good unit defined by the ability to kill a villager in 4 or less hits?

They are light cavalry, they aren’t supposed to fight Knights. All SL civs have Camels.

I didn’t ask for it.

The comparison gets even worse without atk upgrades

There’s many other ways of buffing SL while keeping it within data points we already have. We know Mongol SL aren’t OP, so we have a measuring point of how high their hp can go. They’re decent, but still situational. So remove the Mongol hp bonus. Because it limits the viability of the other SL.

Because any straight buff pushes mongol SL over the edge.

Reduce elite SL tech from 900f / 650g to 600 /400(in comparison cavalier is 300/300) The elite tech is actually the biggest issue. Because the return on investment is the worst especially at that stage of the game when hussars become so much more appealing

Thanks for reminding, I completely forgot the ESL upgrade, but that too should be tweaked only a little. It costs the same amount of resources as Winged Hussar upgrade.

Because they lack PBA. They are really good in early Castle Age though.

Because any straight buff pushes mongol SL over the edge.

Did I ask for a statistical buff? On the contrary, I ask for -1 attack. I want to see a cost reduction which is the main issue.

Compare two units - Steppe Lancer and Keshik. The latter is actually cheaper by 10 food, and much better than the former in most cases. Not saying SL are costly, but also Keshiks are too cheap. Would increase latter’s cost to 60F 60G.

I didn’t ask for it.

Lool so it’s even worse thanm thanks for clarifying.

ability to kill a villager in 4 or less hits?

Do you even play the game? Do you know what SL are good at? You’re nerfing that by 25%. And you think it isn’t unit defining. For an inconsequential buff. You do realise port knights are still subpar even with a 15 g discount. Why would 10g on SL make a difference WITH a big dmg nerf?

Do your homework before you argue about something

No YOU Always take equivalent upgrades.

In a real game it doesn’t work like that. You almost always take armour before damage. Because an eco can’t afford both the moment you reach castle age (the best time to use SL)

You’re conflating 2 things that are inversely related. Rate of fire is given as the number of attacks per unit time. For example, a unit with a reload time of 2 seconds has a rate of fire of 0.5/second or 30/min (also, nobody uses RoF with numbers in AoE2). A call to increase a unit’s rate of fire means that it will reload faster. The conventionally used metric (especially if you use numbers) is reload time - which is what you use in your post, except you call it Rate of Fire. Higher reload time = Lower rate of fire.
Not that nobody can understand your point, but it’s helpful to avoid words that are the opposite of what you mean.

The amount of times the word homework is used is bothering me? Are you a child?

Also, are Light Cavalry raiding units? According to definition, they are pure raiding units with 7 attack. They take 5 hits to kill a villager with both upgrades.

The order of upgrades for melee units usually is: Attack1 → Defense1 → Defense2 → Attack2

provide a force multiplier Vs kts

Make camels. If you are making light cavalry vs knights, you are already losing hard.

Steppe Lancer: Decrease gold cost from 40 to 30 (back to that at release)

i think this alone should be enough to make the base unit good enough to see it used frequently.

for the elite version i’d increase the attack by 1 (11 to 12) to bring it back to release as well or decrease the price heavily. right now the upgrade isn’t viable for it’s price at all. compared to the cavalier upgrade it costs +600 food and +250 gold while both have the same effect which is +2 attack and +20 hp…

And here another weird post that suggest to buff Cumans. In which paralel universe do you live to think Cumans need a buff?

To make it look a litte more fair, percentage-wise the +2 attack and +20 hp are more meaningful for the Steppe Lancer. It increases its base attack by 22.2% and the base hp by 33.3%, while the Cavalier only gets +20% on both those stats. Also the training time is reduced from 24 to 20 seconds, while Knights and Cavaliers both need 30 seconds, and the Elite Steppe Lancer upgrade only takes about half the time to research (55 to 100 seconds).

But even considering all of this, I still agree with you that the upgrade is rarely worth it. A buff to the Elite Steppe Lancer could make the upgrade more appealing but a cost reduction could work as well.

yeah so many problems with this design it’s ridiculous.

first of all the range, coupled with the bonus damage gives it huge advantages against melee units, especially spears.
second of all, the 2 base PA means it’s not really weak to archers anymore either (especially since the extra range can easily be used against archer stacking).
thirdly this makes the unit especially problematic with certain civs (Turks and Tatars having 7 PA steppe lancers, not to mention the huge bonuses Bulgarians, Lithuanians, Poles get.

This isn’t even close to balanced. No thanks. you got a unit with basically no weaknesses that is dirt cheap and fast to train. This is quite possibly more busted then it was at release.

Not sure why you think Mongols even need your suggested change either.

Furthermore most the civs listed do not need these type of buffs.

first of all the range, coupled with the bonus damage gives it huge advantages against melee units, especially spears.

I added +2, +3 vs Spearman in order to further increase strength against Spear-line. Other than that, new design has only 7, 8 attack which means Heavy Cavalry and Camels beats new Steppe Lancer easily. Paladin is still better unit because of +1 PA. But new Heavy Steppe Lancer is better than Generic Cavalier in exchange of more expensive upgrades.

I added +2, +3 vs Spearman in order to further increase strength against Spear-line. Other than that, new design has only 7, 8 attack which means Heavy Cavalry and Camels beats new Steppe Lancer easily.

not really easily. first of all, 1 range is a HUGE advantage all by itself. Second of all these units only cost 30 gold. yes, Heavy Cavalry will win 1v1 most the time, but that’s not really Steppe Lancers niche to begin with. coupled with the range they are going to take very cost effective fights.
besides, what about civs without good cavalry or camels? what do they do? think about it.
Furthermore several of the civs you gave it to have bonuses to offset that lower attack. Lithuanians, mongols, tatars, and bulgarians can all to an extent offset the lower effectiveness atainst melee

Paladin is still better unit because of +1 PA.

do me an honest favor. go tell me how often you actually see paladin in 1v1. Outside of Burgundians, and Occasionally French, it isn’t a common upgrade at all, Among the Least researched upgrades in the game.

I think 2 PA a## ##### vs Spearman for Steppe Lancer is pertinent. Currently TCs and Crossbow shred Steppe Lancer.

Gee, it’s almost like they are designed that way due to their inherent advantages.

Or maybe you shouldn’t mess with stuff when you have no idea what you are doing, as you make a unit that is completely busted against more then a few civs, and can abuse its inherent advantages against units that are supposedly supposed to counter it.

tbf that is only due to its hp. its cost, aesthetics and tech price, imply it is more medium cavalry if anything. especially it’s aesthetics, which are somewhat misleading and counter intuitive

the elite SL if anything is far more heavy cav than light cav. and historically it should actually be closer to heavy cav as well. and i know aoe2 is far from accurate, but its about as bad as making an axe a pierce weapon. you dont arm your light cav with a lance, a spear sure, but not a lance

so it’s literally just one artificial factor that makes it light cav, tell me this is light cav 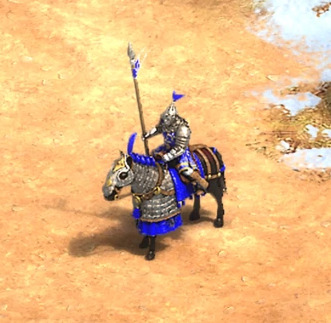 and somehow this makes more sense as heavy cav 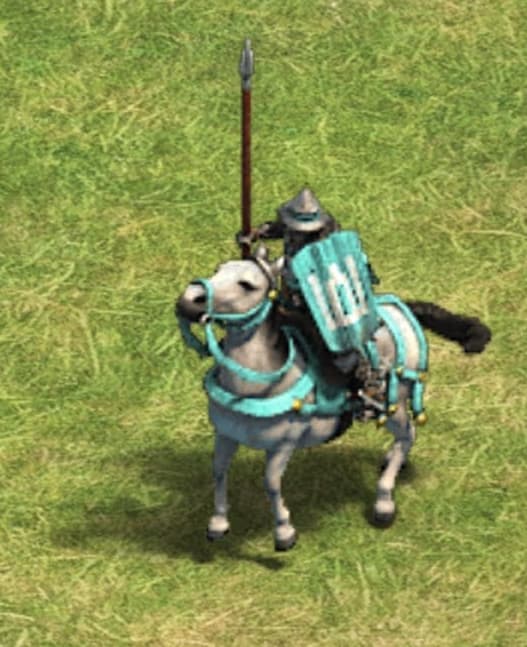 Maybe I just don’t see the point of labeling a unit as light or heavy cavalry unless it is a unit type or armor type that effects the way a unit takes bonus damage.

Cavalry are cavalry and while the stats of a unit differ and I’m not in favor of the insane mode buffs for lancers, cavalry all, I don’t see why labeling heavy or light means anything from a programmer standpoints.