Well… after all, its just barracks upgrade. So 33% could actually be fine.

I disagree with your changes. I’m strongly against buffing incas. Their power is fine.
They just need some help to get faster what they already have. Like a scaling food bonus to replace the llama, and a gold bonus or some discount to replace their blacksmith bonus. Because let’s be real, their old feudal blacksmith bonus will never come back.

As for goths, your changes will make them too strong under certain circumstances. Personally, I’d update their population bonus to +10% pop since castle age. So they’d save some wood and get +20 pop in imperial. Or +5% pop through all ages.

The answers to your concerns are found in my answers to Cactus, there you will be able to glimpse changes in my initial posture and other explanations.

I also think that we should not take lightly the fact that we can reach imperial and easily create kamayuk, there are wars involved and we still have to advance to the Imperial Age. Kamayuk with the final changes proposed in my exchange with Cactus are non-op, still being created quickly, but they only work against cavalry.

My idea of ​​increasing the cost of castles and towers was precisely to avoid the easy construction of castles to spam kamayuks, and to make the feudal attack of villagers + towers a little more difficult, but that executing this strategy does not become impossible.

Below is the conversation we had with Cactus:

I don’t quite understand this… but I suppose you are referring to the rising cost of stone for castles and towers. Okay, we could take out the castles and keep the cost for the towers, it’s just to make it harder to attack early with villagers and towers that made this a broken civilization.

And… we can’t repeat it?

Lmao what? This right there would instantly become the best unit in the game by a huge margin.

not necessarily, remember that there are many unique strong units, samurai, cataphracts. the one that does not cost gold only equates them to a halberdier. We could slow him down and equate the kamayul with the knight of the Teutonic order. It is only a problem in imperial and if you only create the cavalry line.
and if it seems too much to add armor to them, removing that and leaving only the gold cost per food of the kamayuk is enough.

None of this makes sense. You’re nerfing them on water for some reason, they have no issue with their monk techs and no siege ram makes sense only because you gave them infinite kamayuks. So basically you nerf the civ but give them a broken unit in post imp, that’s not helping.

with the changes that I propose and having arson, in that case they would be op. ok we can leave the siege rams.
In the case of the galleon, it seems to me that it makes this civ more offensive in water. I propose a defensive civ, so I add the demolition ship and remove the galleon.
On the other hand I don’t think you can spam kamayuks like a goth does. Kamayuk are only created in the castle.

Ok so why is this a siege civ? Having siege ram + siege onager but no bonus nor siege engineers is anything but a siege civ.

Also Goths don’t need more pierce armour on their infantry since they have huskarls, and no blast furnace is worse in melee than -1 armour. Those changes together actually nerf Goths against buildings, on top of making them even easier to kill with champion spam. Also having faster ships doesn’t matter if you get blocked by stone defenses anyway so that’s yet another nerf.

Okay, let’s leave infantry civilization then. By giving it more armor for the infantry and cavalry I am accentuating its strengths, but if I also added blast furnace the huskarl would be better than a jaguar warrior without the garland wars upgrade, and that would be op. In addition to itself it is very difficult for you to beat a goth with champion spam because the goth produces them faster, the huskarl loses hand in hand with the champions today and will continue to lose in the future.
As for dry dock, I’m more interested in +10 units than speed.

It is only an opinion to make changes not to simply nerf or buff the civ, I think it should be balanced and this implies removing and adding things and not just removing or adding.

I will also leave you a comparison of unit stats between a Kamayuk and a Mayan halberd, as well as a cost comparison between both units. 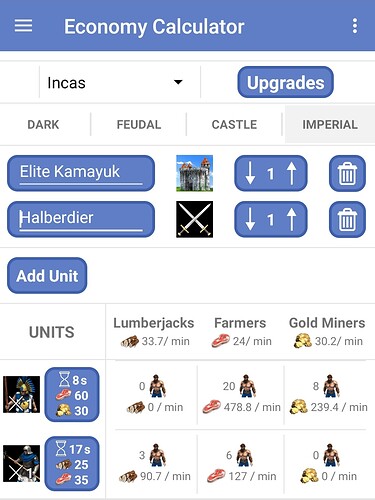 the technology I proposed “Panaka” changes the cost of gold for food, but it could also be exchanged for wood. Note that by changing its food cost the kamayuk would be worth 90 of this resource +10 more expensive than a Winged Hussar. On the other hand, if we replaced the cost of gold with wood, the villagers that we would use would be between 4 and 5 in this resource.

It is just an opinion of how we could improve these 2 civs, we can agree on some points or none but it is always good to exchange ideas.

Greetings and thanks for your time

I really think they should release a DLC with more civs until they reach 100 playable…
Now, joking aside, it’s better to make a change, or to put it in some way, to refresh some civs of the game that have been a bit relegated by the new ones, from the unofficial patch Forgotten Empires to the release of Age II DE with new civ. We must take into account that before the Franks had the strongest knight in the game, today he is one of the strongest along with the Magyar, the Lithuanian and the Teuton, to name the ones I remember at this moment. The Teutons didn’t have as much armor for their paladins however they were given that bonus and today it’s a much tougher civ.

Personally I prefer to make changes in general and then depending on the feelings of the players apply a buff or nerf. If only one civilization is reduced or enhanced, there will always be an imbalance with respect to all the others. I think a review of the original civs (AoE II The Kings and AoE II The Conquerors) would be nice. Something that makes you think is that most, if not 99% of the new civs have economic bonuses.
Don’t worry my friend because kamayuk won’t be op for costing more food (90) or replacing their gold cost with wood (30). I responded to another user (Nerathion) about it.
I think that in the case of the Goths their strengths could be reinforced and therefore give this civ the latest armor for the infantry and cavalry that is currently not available in the blacksmith; in turn remove them blast furnace.

With that much changes it is way harder to know if they solve the problem and if they are all together balanced.

That is a great truth, but we will never know how much good or bad it will do to the game if we do not dare to change. However every time a new civ is added there is a huge imbalance in the game.
I share your same concerns on that point.

Anyway, here I close my participation in this topic. I think I have already contributed with my opinion either to encourage them to change or to reinforce their ideas of not touching anything at all

Greetings and thanks for your time.

turks maybe need a light buff, but i wouldn’t buf them that way. and the buff needs to be in a way that doesn’t impact them on arena.

And… we can’t repeat it?

I will also leave you a comparison of unit stats between a Kamayuk and a Mayan halberd, as well as a cost comparison between both units.

I feel like you don’t understand the kamayuk.
Individually it’s not this amazing unit, but it fights extremely well in groups because of the +1 range.
It’s also strong vs cavalry because of +12 bonus damage and 50% faster attack than a halb, as well as archer resistant with 6 pierce armour, the same as FU cavalier.
Comparing the kamayuk with the halberdier 1v1 is misrepresentative of the kamayuk’s abilities.
The kamayuk is the best or second best infantry UU in the game.

I think that is too strong to be a team bonus.

True, could be too strong. Another option can be implement cheaper barracks techs as a solo civilization bonus and convert some of the current solo bonuses to a team bonus.

The team bonus should be infantry units +2 LOS.
It’s simple and useful.
I’m not the first person to have requested this.

what you mean by “solidfy the infantry theme”? if you mean infantry support, they do have slinger who are unique to them and a great support for eagles. or you meant infantry direct bonuses? even in that case, civs that have related bonuses are not winning via infantry more often than not anyway…

There is no way that Incas is the weakest civs. Agree with Goths though.

I have no idea why we don’t have all infantry +1/+2 armor as an Imperial UT yet. I initially thought Incas is a good candidate for that by changing the current effect. But will be a bit of waste since Eagle & Kamayuk are straight forward better than Champion & Halb. Maybe change the civ bonus of “Infantry blacksmith upgrade affect villagers (Starting from Castle age)” into Infantry armors are free. Currently this bonus is not that useful anymore.

Free infantry armor will be a direct infantry theme as well as a direct buff to play 3 Barracks Eagle like Aztecs but in a different way. The only downside is it will make them M@rush+Trush civ which even devs themselves don’t want to see.

Incas are far from being weak, they are the versatile ‘meso’ civ

Ok someday we seriously gotta discuss the fascination people have with giving Incas the weirdest situational bonuses for their farms. Like is everyone dreaming to build forward farms or something?

Yup, castle with a farm-moat. On more closed maps carpet the chokepoints with them as well. As it only costs wood and villager time/risk it’s a great late game addition to your defenses.

Yeah but how, honestly I still thinking that adding only pikeman would help a lot in other maps, but how to nerf them for arena I don’t know maybe making to spend resources on chemistry instead of free and adding cost in gold to gunpowder units

The team bonus should be infantry units +2 LOS.

Actually that will be OP due to the laming potential of Eagles. If except eagles, I’m fine with this.

20 characters (hey i finally get why people say this now