We know that what most leave players discouraged in the game are the bugs that it has. Here I will list the main ones that should be fixed as soon as possible.

We know that there is a bug/exploit happening where the market is already doing an email delivery trip with the full feature. The route for gold/other resources is calculated by the distance traveled. So the market should go to the market and only when it returns deliver the resource. What is happening is that the merchant already leaves the market/landmark with the full value, that is, he saves 1 trip. For example, it’s like if a villager collecting 5 resources delivers 10 resources to the warehouse.

We know there is a bug/exploit where you think of building a wall in a place where you have no vision. An example of this is using it to see if the opponent has a dock. (Tactic used by Bee in Wololo and apparent reason for her banishment). This is a bug and needs to be fixed urgently. Players cannot take advantage of war fov without true exploration.

We know there are other bugs, like: Hearing the noise of the landmark being put down. The land sinks when a building is placed there. Noises related to resource gathering even without the sight. For example: Listening to the opponent collecting stone even without having a scout vision of that event.

4- Pathfinding of the game.

We all know he’s awful. The unit takes the farthest or wrong path to travel. This is really bad.

I hope the developers see this and fix it. This is a priority in the game.

There are other bugs to be fixed like Ottoman arrows not being on fire even after researching Incendiary Arrows and as well as the Documentary cutscenes having no narration.

There’s also a bug where sometimes, a unit is still standing and looking alive even after having died and since it died, it’s no longer selectable, as seen in this following pic: 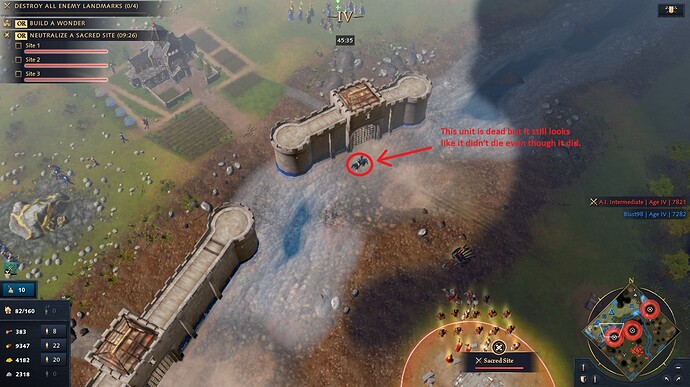 Hey all, thanks for these report(s).

Please only one bug per thread—helps save my sanity as well as allowing others to add information more easily. Much appreciated!