Bugs in Last City of the Incas (Act 3 Steel)

There are some bugs in the Last City of the Incas scenario:
There is a gap in the wall south of the base, enemies can get in.
Every city from the incas are set to Mother Nature rather than to the ally player, and you can attack each building except the warhuts and the fortresses.
The Fortresses are still being referred as temples in the scenario, not sure if it’s a bug but the fortresses aren’t named “temple” so there could be confussion, the characters and the interface should say fortress rather than temple or change their name.
Some units get stuck on inca buildings (see bellow)

What was supposed to happen if the bug you encountered were not present?
The wall should be complete.
You shouldn’t be able to burn enemy city.
Fortresses should be correctly identified.
Settlers shouldn’t get stuck.

What actually happened (what went wrong) because of the issue you’re reporting?
Wall is incomplete.
You can attack allied city.
Fortresses are called temples
Settlers get stuck. 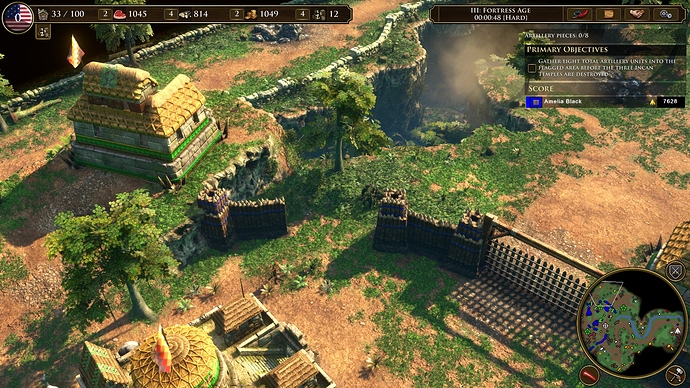 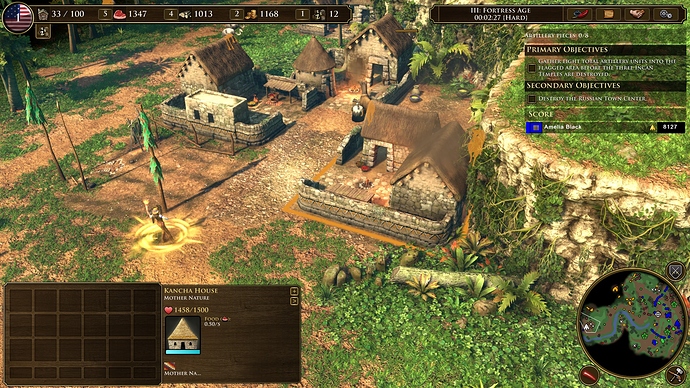 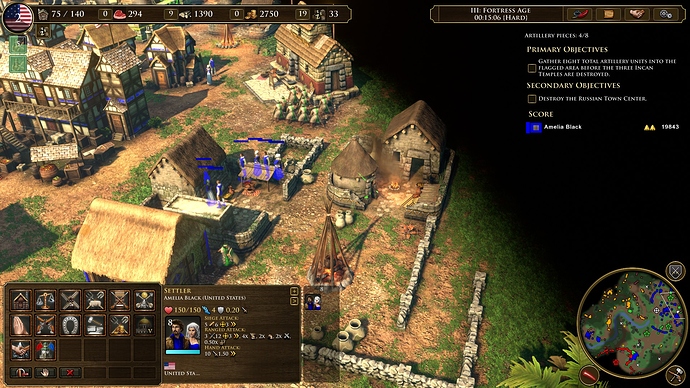 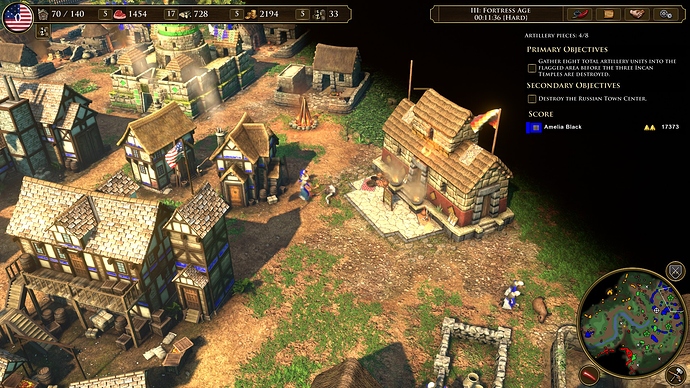 Same issues found by me too. The gap in the wall is there and the Kancha Houses buildings are owned by Mother Nature ande can be attacked by the player. The Circle still destroyed a “Temple” when I was playing an another day but this is easy to protect even though I was playing on Hard mode (The AI isn’t much better at some stuff on here though anyway.) I anticipate they won’t be able to correct the temple issue besides pulling the assets from the original game as you can’t easily dub or cut the words that Amelia says. They got away with cutting the last bit off of Kanyenke to make it Ka:nien but this is more difficult. I say put the original assets for the Temples back in this game and touch them up a bit or flare the map so the player can identify the so called “Temples.”

Theres also a random “Native Building” outside of your base owned by Mother Nature that lets you upgrade a “Traveling Merchant”? which also doesn’t do anything and is purely a resource loss. Ij fact this is the case with a lot o Native buildings which seem to have upgrades for a stagecoach for a trade route for some reason

I say put the original assets for the Temples back in this game and touch them up a bit or flare the map so the player can identify the so called “Temples.”

Curiously enough, the updated models for the Inca Temple and Inca Outpost are present in the game. You can see them in the Inca Overview video they released last week, and in the Scenario Editor.

I agree with the notion of putting the Temples back in, and maybe even some of the old Inca Outposts. It would be a shame to let these assets go unused.

This issue is currently being tracked, thank you for the report.

Another problem with this campaign is that the Incas produce jaguar knights and eagle knights in their buildings, Aztec units, rather than just Inca units. In one of the previous scenarios too, in which one walks in winter, between the gorges of the Andes, there are some Mesoamerican buildings, instead of Incas, still in the landscape, although almost all of them have been replaced by Inca/Quechua buildings.

It is not wrong to refer to Inca fortresses as represented in the game as temples, I will explain why below.
The old temples, which have water sources, from the original game, were not completely wrong, in relation to Inca architecture, but since the definitive game comes to make native civilizations more realistic and objective, moving them away from the magico-religious aura of dancing bonfires, magic and special powers, making them more real (which was a great job done for the Incas by the AOE 3 DE team, decent work and very beautiful, by the way), it would be interesting that, although these structures could also function as open-air temples, which would be treated in the campaign as aqueducts, as they are like sources in the places of exteriorization of aqueducts, which on the Andes could even be channeled at ground level, or underground, but always with decorated exteriorization places. of the waters, where rituals were often performed.
Now, the architecture of the Inca outposts is all wrong, it must have been someone’s imagination idea, and needed to be totally excluded from the game. It has nothing to do with Inca architecture, or Huari, and it is thinner at the base than at the top, it has pillars supporting a very thick stone roof, it’s unusual! It should be replaced by watchtowers with Inca texture, thatched roofs, etc, or by tambos, as this outpost is completely at odds with the careful work that the developers went into creating an Inca architecture as faithful as possible, in what is fanciful, such as In towncenter, at least we know that it was used to adapt to the silly towncenter model of the original game, and in the Tiahuanacotas friezes or colored chimus of some buildings, at least the art pattern that existed in the Andes was preserved, far from the most common Inca cities, but there were, in the centuries of the empire, or in the ruins of the past.
In ollantaytambo, these fountains are built with stones and where the water comes out, they present symbols of chakanas, similar to this ancient Inca temple that is still in the scenario editor. The architecture of the Inca outposts or huari, from the scenario editor is quite wrong yes, and it resembles an Inca fortress from an old Disney Scrooge comic, but the Inca temple shown, closely resembles the Inca fountains, often being exteriorizations of aqueduct pipelines. These places could also have religious functions, being associated with the huacas of the waters, often functioning as open-air temples. The architecture of the temple is not wrong therefore, and could go back to the campaign, and even be used in the normal game. It would be interesting if the statements that indicate that the temples should be destroyed, indicated that the aqueducts and the temple were destroyed, keeping the Inca fortress in the city as a temple, since several fortresses had the main functions of temples, as was Sachsayhuamán, construction in the which the Inca fortress in the game was based on (which if it were the same as the real Sachsayhuamán, it should be bigger than the European fort, but I even think the size it presents in the game is more realistic, as the game represents colonies of the Inca empire fighting other colonies and villages of other peoples, and most of the Inca fortresses were solid, built on very high places and very numerous, but very small, in relation to European fortresses, the Inca fortress therefore reflects more the reality of the size that is in the game. But this fortress, with its circular turret, proves to be a “royal house of the sun.” The turrets had several rooms, to house soldiers and officials, or townspeople. , in times of need, as Garcilaso describes that existed in the circular turret of Sachsayhuamán, but the circular towers were also related to the solar cult, and buildings in which they are present are usually sun temples, so it is also right that the fortress is used inside the city, like a temple.

I still consider the use of the old Temple model to better imply the scenario’s narrative: preventing the Circle from taking the Fountain’s water.
It could be theorized that when the Incas took the water, they managed to store it underground and made it accessible through these springs (which, as you said, can be considered sacred in andean religions). This is the first thing that came to mind when I noticed these Temples were water fountains.