Does anyone care to share their favorite build orders or at least direct me to another thread with build orders, please? I’ve been wanting to play Spain especially but I can’t find any good post update BOs.

I main Inca so as you can probably guess it’s 3 villagers, 700 gold, 5 villagers, monumental architecture, machu picchu, 7 huaracas, 6 huaracas. Age ups being 3 priestess and then fast age up. Chop wood in transition for a couple of kanchas and a community plaza, start the game building a tp and chopping 30 wood for 1 kancha then all to food. stronghold gets shipped right to the chasqui.

Probably an FF so I can start sending the new cards and building a good economy.

These are the mandatory cards for a FF 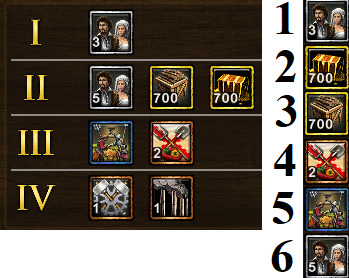 This is the order that I would give them, but depending on the situation it may be convenient for you to send the 700 wood before the 700 gold

The other cards should be to counter any attack of the opponent and to improve units or the economy.

For example this is my FF deck

It’s not very good, but I think it could work in some situations

I hope this helps you

There’s a website called ‘no idle tc’ that has lots of build orders.

thank you! I’ll look into this.

I know but it hasn’t been updated for a very long time and many of the BOs are outdated.

Now, although you go as a team and you want to go cheap in third, you will have to stay in second maseando, for which you do a semi ff either hussars or musketeers and in third you go with the politician who gives you a Tc, you build another tc and you send marceluos years, do not make units that cost food because you are going to spend a lot with the 3TC, there I would recommend guerrilla with some rodeleros and cannons

So it wouldn’t be ff

Your swapping 1 card for another, same amount of cards sent. I didn’t comment on whether your build is an FF, just that capitalism is a waste if you have 5 villagers to send like waiting an extra 30 seconds to reach age 2.

You have no idea how to play competitive Spain, obviously 5 villagers are much better, but we also involve time, The ff always in almost all civ contain the order of 700 gold and wood, Now if you go to send 5 villagers first and then 700 gold, you would be passing later than age because it would be after minute 6:30, if you start to see competitive 1v1 decks like robroth or samwise who are the best Spanish civ players, you will see they have 300 wood, they send 2 villagers, they usually send it even with the FF plan because you can’t afford a third shipment at age 2 unless it’s military because it’s necessary but it would hinder the ff, I’ve played with Spain in 1v1 between 1500 - 1600 elo, now although I don’t like to talk like that but it annoys me a lot the people who talk a lot in this forum with their ideas and have no ■■■■■■■ idea how to play, that’s why people prefer to talk about these things in the esoc forum

If you’re doing a straight FF then why bother with capitalism at all, way better to just send another unit shipment. If you FF and go more eco with spanish gold for example you can definitely fit 5v in, especially with faster shipments you can go 3v,700g,5v. Seen many players send 5v after 700g at high level. Not that it’s the best way but it is viable and I’d always take 5v over capitalism.
Ideally you wouldn’t send either though just 3v, 700g, 700w then unit shipments. It’s an extremely boring civ to play in general though.

Also no need to be rude, not everyone mains every civ and knows it perfectly. I main inca not spain just commenting because I’ve seen 5v sent before in tournaments and capitalism seems a total waste of a card, particularly if the plan is a standard FF where the card is barely going to trickle anything before the game ends.