What do think if the Burgundians eco techs simply costed 50% less wood instead of food?

What that make it more fair? Or even stronger?

Essentially a worse version of the Vietnamese bonus.

However, they still can get the tech more early on the side.

not really - food is frequently the limiting factor - they once again would resort to what they did pre patch. not even getting the bonuses except the wood ones.

Why? it’s completely fine.
They are in the range of a balanced civ, and after the nerf of flemish revolution we will see them not among the top 5 civs for sure.

The eco bonus is not even close to the bonus other civs like chinese or vikings get. It’s in the range of celts or teutons.

having another franks was the last thing the game needed. position-picking is killing arabia

The Burgundians idea is to have quick tech into paladin plus cavalier in castle age so no.

The Burgundians idea is to have quick tech into paladin

the eco bonus is good on all maps / positions

the paladin stuff is what ignites the garbage fire

the paladin stuff is what ignites the garbage fire

No bloodlines hurts them at late game
Is their eco cmon, remember when Persians and Tatars had OP eco and people just tried to get rid of things that weren’t causing the problem (Free TR and PT and Kamandaran tech).
TBF let Burgundians enjoy their power now 11, people long time were complaining that were too weak.

Instead of this which would make the earlier use bonus unless again maybe 40% dark age 35% feudal 25% castle and 15% imperial food reduction which will still allow you to use the bonuses early but to a slightly less effective.

It would make it a bit worse on land maps and a tiny bit better on hybrid and water maps, but overall it wouldn’t really change a lot, plus it would be kinda similar to the vietnamese eco bonus.

Just because a bonus is strong doesn’t mean it needs to be gutted. Seriously. Burgundians are now a good civ. This is a good thing. They have great powerspikes that need to be used tactically. This is a good thing. They are not broken, otherwise everyone would be up in arms with convincing arguments as to why this is the case. I have seen exactly zero convincing arguments.

Viper said he thinks they are the best booming civ, period, now, after trying them on Arena, which is interesting. Preliminary thoughts of course.

Back to the point, though. If anything, Franks are broken. Complain about them. (They’re not broken, but hey; they’re definitely more ‘broken’ than Burgundians).

Franks more broken than Burgundians? In what world? 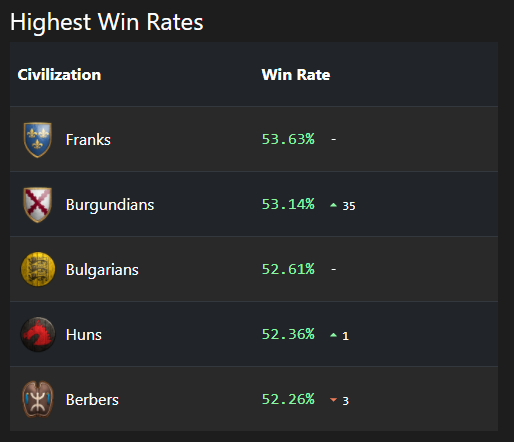 50% less food is + early tech is definitely op yeah
that’s kinda funny where some people think thats franks is “broken” when they are not and clearly not the best civ especialy on water / hybrid map when burgundians is completly too strong and you can afford double bit axe, horse collar dark age and doing a normal uptime 22pop whith instant bow saw and almost heavy plow not to mention wheel barrow discount which makes the sc fc so easy with the best eco in the game currently to spam cavalier at castle age then paladin… No bloodlines? np no one civ can afford paladin as easily in 1v1 and you will spam a lot better, not to mention where booming with burgundians can be on arena… malay miniboom feudal is great what is burgundians one probably a lot better and less risky than cumans one. don’t mention also the relics + farms bonus which can allow to make siege or even some paladins as well in the trash war where gold is no longer minable

How to play civ ? spam cav + make one farm + respam cav whow an interesting civ
please continue to add more civ like this one instead of only fixing crash or some weird bug which happens a least 1 times per games , i have a lot of villagers trapped in forest at the moment thanks to pathfinding which allow villagers to pass forest and just stay trapped

Viper said he thinks they are the best booming civ

Well, they have potential. But they are not: 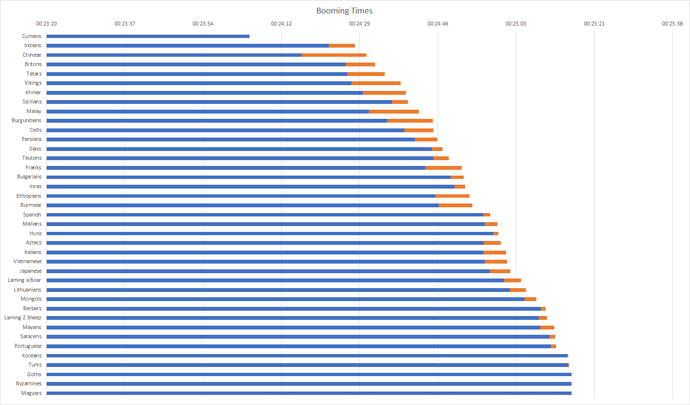 I dont get this graph, can you give some context please? “Booming Times” is a bit vague

It is a timestamp when it is theoretically possible to reach a specific eco. It’s chosen in a way you would basically be half into the transition in only investing in military afterwards from a full boom.

It is calculated by assuming a FC into 4 TC boom and then adding further TCs. The orange parts mark a approximated possibility to improve that boom by chosing a different build.

literal math shows its not as good as people are portraying. they get less wood then Celts do, all the while having to invest more into getting it. even assuming they grab both upgrades, they pay 125 food and 150 wood for 40% faster lumberjacks in feudal. Celts get 35% faster and only require 100 food and 50 wood. so is 5% faster lumberjacks really going to overcome the extra 25 food and 100 wood cost for it compared to celts? in one of vipers games he ended up only getting about 61 extra wood by the end of dark age and it cost him 50 food for that (meanwhile celts would have gotten 88 extra wood).

Farm upgrades are not as good as people like to think they are, pro level games rarely grab heavy plow until late castle age normally.
you could in theory go ahead and grab Wheelbarrow, but its going to put you behind by about 3 villagers while you do so.