Can only see games from USWEST server and nothing else?

I’m located in germany.
Yes i can create a lobby on every server (created a lobby on all servers without a error)
Today i saw for the first time lobbies from brazil and australia.
But noting for (refreshed about a minute on each server filter

So maybe there where just no games on these servers at the time i looked.
Today was also the first day i saw more than 5 lobbies at once, so i would say something has changed.

I have it set to all regions. I am able to create on all regions. I feel like there should be more games listed than what I see but perhaps there just isn’t that many games.

Many games don’t show up at all. I’ve had a friend host a game, and I don’t see the lobby, and no one joins it (even though we can play together if we both join a lobby we can see).

It’s been this way since launch, but it seems to be random which region actually shows up (mostly weseteurope, eastus, westus2, but not all of them at once).

Yeah, I’m having issues with game visibility in the unranked lobby as well. People don’t see my lobby and vice versa.

Edit: I’m also only able to see westeurope lobbies, and am only visible if I host westeurope. This really needs to be fixed ASAP, please. Custom games are suffering!!!

Edit 2: I signed off from XLIVE and I could for a brief moment see some lobbies from ukwest and uswest… but at the same time uswest2 completely disappeared from list. Then a few min later I’m once again only able to see westeurope. Anyways, it seems like there is a huge connectivity issue!

yesterady was working kinda fine the lobby browser, and today is broken again? come on!

With crossplay re-enabled you should see more games. We did push out another patch recently. Please let us know if you are still seeing issues after the latest patch. 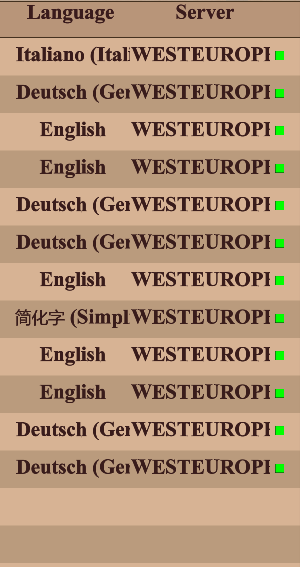 I can still only see games from westeurope, and people will only join my game if I host on westeurope. This is the Steam version.

Just to check, are you updated to the latest patch? The last should have been 33315 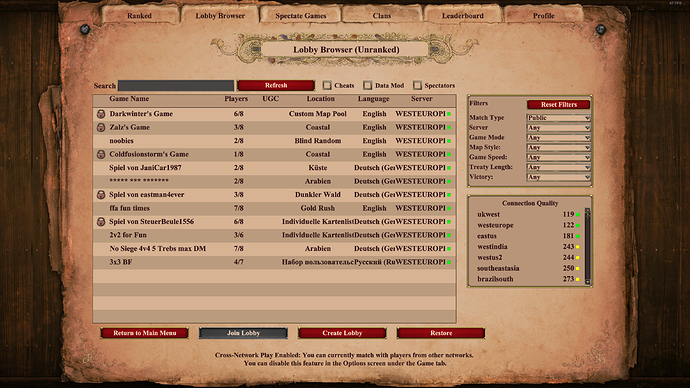 When going to Spectate games, I tested now (9:50 pm CET), and can only see 47 games from all regions, of which 10 are custom games, and 37 are AUTOMATCH games. When I refresh, new games pop up. It seems random which ones actually appear. I’ve been watching streams of other players who experience the same thing.

If you search for a specific server region do you see games from that region populate?

Based on the connection quality on your screen shot I would expect it to favor the regions with highest quality.

If you search for a specific server region do you see games from that region populate?

I didn’t check yesterday, but I’ve checked many times before and the behaviour has been quite consistent since launch: I’ve only been able to see the same games as the ones I see when “Any” server is selected. I.e., no, I can not see games from other regions if I select a specific region other than westeurope.

Based on the connection quality on your screen shot I would expect it to favor the regions with highest quality.

If you want me to help debug this I’d love to help out any way I can, but there has not been much activity from other players on this thread, so I suspect the bug isn’t as prevalent as it was near launch. Maybe I should just try a clean reinstall and see if it solves it? I also know several other players near my location, so I can check with them to see if they also experience this bug.

In the Lobby Browser between 0 and 4 games are showing for me to join. But when I look at games to spectate there are dozens and dozens of games listed. Why is that? I live on island off the East Coast of Canada, am I not being shown games because of my ping?

Multiplayer is quickly dying in this game because every game is a hassle to get started, with hosts having to re-host half a dozen times before their games become visible in the lobby list. Me and all my friends already gave up, and we’re waiting for a patch before playing the game again. But with no word from the developer, we’ll soon be tired of waiting. This bug is such a massive issue that it’s really not acceptable that it goes unaddressed any longer. Please make an announcement as to when we can expect it to be fixed.

No one in Europe can see any game hosted anywhere other than “Western Europe” - even people from the UK can’t see UK server games, according to people I’ve talked to in the UK.

But most games hosted on “Western Europe” aren’t visible either. Every player I’ve talked to confirms the same thing - when hosting a game, there’s only a small chance of it becoming visible in the lobby. You have to re-host again and again until it suddenly works, and at that point it fills in seconds because of the hundreds of people in the lobby getting funneled into an extremely small amount of visible games. It’s hard to even get my friends to join my games, because they fill so fast with random people once my game actually works, and you have to open a slot before inviting friends, causing strangers to instantly fill that slot before I can invite.

It’s a total mess, it needs an extremely urgent fix.

I’ve reinstalled the game, and can still not see any games outside of WESTEUROPE. I’ve now talked to other people in Europe who all have the same problem.

when hosting a game, there’s only a small chance of it becoming visible in the lobby. You have to re-host again and again until it suddenly works, and at that point it fills in seconds because of the hundreds of people in the lobby getting funneled into an extremely small amount of visible games. It’s hard to even get my friends to join my games, because they fill so fast with random people once my game actually works, and you have to open a slot before inviting friends, causing strangers to instantly fill that slot before I can invite.

I can confirm the same thing. I’ve found that specifically hosting them on the WESTEUROPE server in the “create lobby” screen generally allows people to join (this may be confirmation bias though), but as mentioned above, if you want to play with friends you have to be fast, because if the lobby does show up, everyone rushes to join it.

It’s been like this since launch, and there are plenty of threads about it on Reddit, here are a few:

All of which were posted in the last few days.

Etc. These are just posts updated in the last couple of days. Based on the fact that lobbies that do show up fill up incredibly quickly, this must be a widespread issue, and I’d love to have proper updates about this.

It’s not merely widespread, it’s ubiquitous. The only reason there aren’t more complaints about it is that most people don’t notice the issue because they simply join the games that they can actually see, and give no more thought to it. Meanwhile most hosts are likely unaware that their game isn’t visible, and simply assume that no one wants to join.

Any news on this? Can still only see lobbies from one region (WESTEUROPE)

Go to aoe2.net to see all steam lobbies. Then you can directly join there by clicking join the match. It will open your game in the selected lobby. You can also see the lobby elo, calculated by making an average of the joined members, i suppose.
You won’t see microsoft store lobbies.