Can we do something about all the smurfing in team games?

Recently I’ve been noticing A LOT of smurfs in ranked team games, like every 2nd game I play is against smurfs at this point, it’s not even fun to play ranked tgs anymore.
This screenshot below shows the stats of my opponents from a 4v4 game I played and it’s ridiculously obvious that these guys are HUGE smurfs… 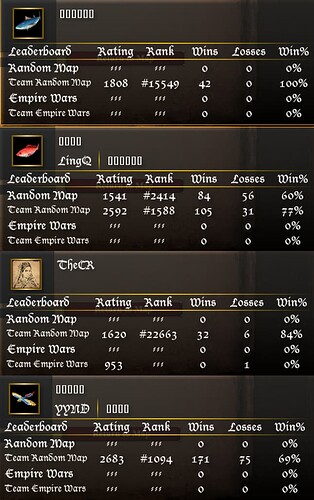 There are a few possible solutions to the problem:

Edit:
A 4th solution would be to tackle the problem at its root. The reason why the current system suffers from this issue of smurfing in the first place is that new players take a LOT of time to reach their correct rating because ratings of old players are so highly inflated.
For instance, the player above who has 42-0 win-loss is only 1800 while I myself am currently 1900 (1200 1v1) while I myself have a negative win-loss count.
Solutions 1 and 2 work towards increasing the speed with which someone reaches their right elo and hence are ok solutions. The proper way to fix this issue once and for all though is to reset the ladder entirely and the new starting point for everyone should be a function of their existing RM 1v1 or current TG rating, and their win rate (or maybe a better method that an actual statistician might come up with). The goal with this reset would be to remove the ridiculous inflation which would enable players to reach their actual rating faster

There are ton of suggestions here enough, the main point is the developer chose not to do any action.
Stop playing TG man for a while until they realize how urgent it is.

They are just now fixing queue dodging, smurfs will be fixed after next dlc.

It seems like the goal of smurfs in team games is to intentionally lower the Elo of the team in order to play weaker opponents. This is really easy to fix.

However, in your example, the organized team’s Elo would be considered 2441 since that’s 91% of the top player (2683) rather than the average of 2175. Bringing in low Elo smurfs doesn’t help much after this change.

Now some honest people enjoy playing with a lower ranked friend. That’s fine, you’re going to need to carry and coach your friend if they are below 82% of your Elo.

The problem is also that they didn’t reset the team game ELO after they fixed the inflation. So the ELO of long time players it too high compared to new players/smurfs.

They could also have a “smurf queue”, similarly to LoL.

Not sure exactly how it works, but I think it goes something like : → until they have a game count of 50 or so, players will be matched against other people with low game counts.

It might take longer for them to find games during smurf queue, but I’ll say that’s the price to pay if you’re going to make smurf accounts.

This way, people who have a lot of games and ~50% winrate (meaning they are at their skill elo) will not face the newly made high winrate accounts (those they will face each other)

this is not ture, even after the reset of ELO, smurf issue will still lead the inflation soon or later.

Thank you for your suggestions! We are aware of this issue, we have a ticket tracking it

There are a lot of topics about the same problem. You should also check them out, they also give more suggestions.

Just ban/kick them from your ranked lobbies and… oh wait