Can’t Join Friends Lobby’s Other Players are listed as Numbers NOT Usernames. Played earlier today WITH friends and it worked fine. A few hours later and its not working. I can do 1v1’s just fine, but names are still not showing up.

Can’t play with them at all now.

I have a similar issue, where in the ranking screen, all players are listed by a long number (the clan is visible normally). In addition in-game, both my opponents and I are listed as “player1” and “player2” instead of the usernames. The names do appear correctly if I load the recorded game. I did not see this issue for streamers though, so it might be a problem with my version (Microsoft store/German langue setting).

Same. Exactly. Have you figured out a solution?

Problem persists, I found no workaround. I noticed that initially when starting the game, the top player ranking shows up correctly. If I close the ranking screen and reopen it, the names are replaced by numbers. Perhaps that helps with bugfixing for the developers.

Problem persists STILL. I just uninstalled, and am trying to reinstall.

Re-installed. STILL NOT WORKING. Problem persists. This is ridiculous. I literally can’t play with my friends. And we all have it through gamepass so this shouldn’t be an issue.

Exact same issue as me.

My friends have purchased the game through steam, whereas mine is on the gamepass.
I noticed the game list is different to what my friends can see- I can see a total of 6 games, whereas they have the normal large queue.

Also on the login screen he mentioned his version number was different- however I have installed the most recent patches :?

The game can’t be played online with the community in its current state.
eg of leaderboard 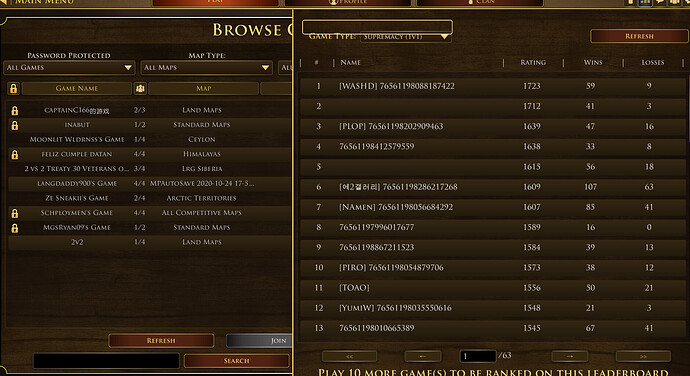 Same issues.I friends bought the steam version while I have the Microsoft Store version. Before updating, we played muti-game online few times. Now I can’t play with steam players. I’ve checked the differences between our game versions. The latest Win10 store version is 100.12.4087.0 The steam version is higher as 100.12.5025.