This game mode is currently in development. 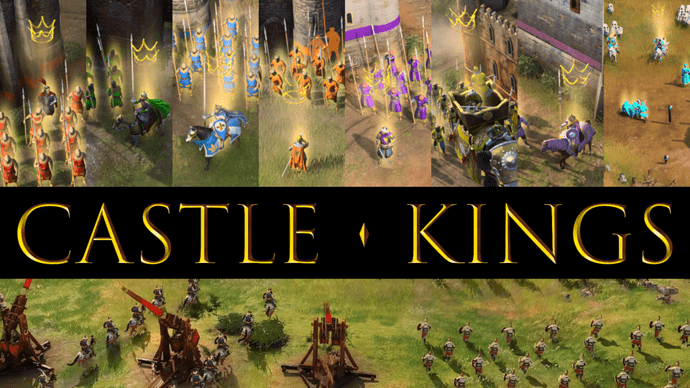 The official board to discuss the Castle Kings game mode and tuning packs for Age of Empires IV. Do you have any suggestions or questions about the mod? Please leave a comment below if you would like to help the mod grow.

This game mode blends together quite a few familiar concepts: Regicide and kings from AoE II, explorers from AoE III, and the Crusader Kings franchise. It’s good for players of all kinds looking for something exciting, and it’s based on how the AI already treats their king.

Play as the King, and depose the enemy rulers. Should a king fall, and his Castle be left standing, an heir may come of age. When a player loses both their King and their Castle, that player concedes in defeat. And to the victor go the spoils. Kings also provide a substantial bonus to nearby villagers, and will bolster allied forces in battle.

All the while, their Castles raise the local levy, to fight, in the name of their King!"

MAKE SURE TO USE THE TUNING PACK

I’ll break it down even further…

When a King is killed, they can respawn at their Castle if it’s alive, but only once per age. So each King can have up to 3 extra lives. These are the heirs who take the place of their fallen King, like in Crusader Kings.

Whichever player lands the killing blow on a King will become the new claimant of that King’s kingdom. You can gain and lose claims on other kingdoms this way.

When the Castle is destroyed, as long as the King is safe, it can be rebuilt, and the AI is already designed to help with rebuilding their allies Castle, should it fall. When the King is dead, destroying the Castle will cause defeat, and the buildings, units, and resources will transfer to the claimant of that kingdom, as well as the current population cap of that player.

So you don’t simply conquer these kingdoms, you claim them, and then grow in military strength as you develop your very own multicultural empire within a match.

Kings themselves have been designed in consideration of their unique and racial identities. Providing a King unit based on each faction’s style of play:

MaA kings and the HRE are hardiest. Tower Elephant kings get wrecked by levy mobs but otherwise are even more of a tank. Knights are the weakest but are also much more mobile and great raiders. But the Great Khan is the hardest to kill, because it’s the fastest unit in the game and also the best at raiding.

The superior power of the Great Khan is offset by not starting with a Castle at all. Instead the Great Khan must survive until strong enough to siege and capture a Castle, so they can finally produce their own mongol levies and heirs at their new Castle.

Each King unit provides equal auras and benefits to their allied forces. Based on the idea of royal supervision. These are beneficial auras for other units, like passive out-of-combat healing, combat efficiency, and increased gathering speed. So the King in this mod is much more useful anywhere on the battlefield, and should only be garrisoned for protection.

Kings (but not Great Khans) also have a new ability to go with Treason, based on AoE III, known as Ransom. The Ransom ability costs gold but will instantly move the King back to the Castle.

Levies are a unique thing to this game mode as well, and the concept is one of Crusader Kings. In real life, levies we’re the farmers and hunters who were conscripted and simply given or brought spears to use in the wartime efforts as demanded of them. So in this game mode, they are included.

Each faction can receive their own levies periodically. All levies are created equal and cost nothing to you. Weak cannon fodder with reduced siege damage that can hold the line against horseman. They are visually based on their faction’s tier 1 spearman unit. (Norman for English which is the same model used as French)

Because there is no way to spawn levies, but they are free, it’s best to place them in defensive towers and positions to keep as many of them alive as possible. That way you can maintain a superior amount of levies into the late game where they’re mobbing presence is game changing.

The scripted game mode also offers advanced AI decision-making. In Castle Kings, the AI is currently capable of retreating, garrisoning, and ransoming their king unit, based on the health ratio of their unit. New AI decision-making and play styles are still in development. So let me know if you have any thoughts about it.

That about covers it. Work continues on this ambitious mod project, so bug reports are much appreciated. Especially when running the game with the -dev launch option, so error codes actually tell you what went wrong. But steps to reproduce a bug are most important.

Once again, feel free to share your ideas for the mod.

1.7 is in the wild! And the new tuning pack has been re-uploaded again as well (because of a bug with updating the tuning pack each update).

This covers the majority of the changes in the 1.7 update. The mod is the most stable it’s ever been but there may yet be some SCAR errors kicking around.

I haven’t said much about the future of this game mode… So I wrote a little roadmap of what would be awesome:

Awesome Concept! I was stating months ago already something like that (were talking about a better usability of Kings and the Regicide Mode by giving them an Aura for boosting the troops). But you really put some work in it!
Can´t wait to test it out .

Oh yeah! Lots of work went into this. I haven’t worked on it much over the last month though, just patch 1.7 to make it a lot more stable and apply these Levy changes.

Adding Ottoman and Malian should be a simple task. I’m curious to find out which units will work best as kings. Sadly, not all units are capable of displaying the crown.

Oh, I also remade the Regicide game mode to use instead of Royal Rumble. Like it was in AoE2, the AI’s king unit will garrison in the building so there’s no need for an aura. It’s like the lesser version of Castle Kings but it’s for those who crave that classic experience.

Nice. Thanks for the info!

All Hail,
Ottoman and Malian!

The update brings the game mode up to par with the update for Ottomans and Malians. The tuning pack has also been updated and adds new King units. The Great Sultan of the Ottomans is a Knight unit, and the Lion King of the Malians is their Horseman unit, they both share the auras of other King units. This includes a Castle, Levies, and Heirs for each of them. The update also corrects a minor bug in the tuning pack where spearman edits had remained for all of the races, except for English.

Love the idea behind this and have enjoyed a few games with this mod.

Couple of bugs to report:

Really looking forward to sending more levies to their doom!

I’m reposting this again so I’m actually replying to you this time.

So I’m not experiencing any of these issues you’re having, are you using the Castle Kings tuning pack? Are you on the most up-to-date version? Try removing the game mode, the tuning pack, and make sure they show green wrench symbols when you select them in skirmish match, which means they are up-to-date.

It’s been confusing to roll this mod out because of the localization issues, I think I corrected it by dropping support for Chinese localization. (This is a bug on Relic’s end)

Thanks for checking out my mod and sharing your thoughts

Thanks for the quick response.

So I have both the tuning pack and the game mode, green wrenchs on both (I even removed then redownloaded before posting to make sure I had the latest version).

I’ve had multiple games with victory requiring me to kill all enemy units before they are eliminated. Despite being eliminated their castle will continue spawning levy. I’ll try multiple different settings today and get back to you about the different victory conditions.

Is there any specific info I can get you to help with the bug fixing?

Okay, thanks for confirming for my sake. Your info is already helpful.

I tested the Levy multiplier and found it wasn’t working, as you said. It was an easy test and an easy fix. I haven’t looked into the rest of the bugs at this point.

Player Only means the kingdoms that belong to players are claimable by another player or AI. AI Only is the opposite, only AI kingdoms can be claimed by a player or AI. And you could consider AI kingdoms as a PVE reward within a PVP game. So, that’s how it should be working

I’ll test any of your other reports and release an update once that’s finished.

So I’ve finally had the motivation to sit down and play out a 1v1v1 based on your feedback… and I’d like to apologize for saying you were wrong because I’m experiencing the same issues and you are right.

It would appear victory conditions were broken in the previous update. I’m not sure why yet. But yeah, just wanted to say that I confirmed more of these bugs thanks to your help

Also, the treason button worked for me so maybe the kings were all dead during your tests. I’ll try to update the mod this week.

this is awesome, can’t wait to try