Here is the problem I’m experiencing…
I play mostly multiplayer games with friends vs the AI so all of these games are in that format with varying game size. The game freezes for all players 30+minutes into the game until you tell windows to close the game (I’ve waited ~10 minutes with no change). I can reboot the game immediately after forcing it to close and everything is normal but its as if the game never happened but that makes sense since the game never finished. This has happened in 4-5 games to me so far and my friends have reported it happening in games I’m not present for as well.

Game freezes for all players and becomes unresponsive.

What are we supposed to do to provide more details? The game appears to remain frozen forever. It doesn’t crash on its own.

I can forcibly close it or click “close” on the “App is not responding” window.

I’m still experiencing occasional freezes in 100.12.5208.0. The game froze after an AI opponent requested to surrender. This time the other player was able to continue playing. 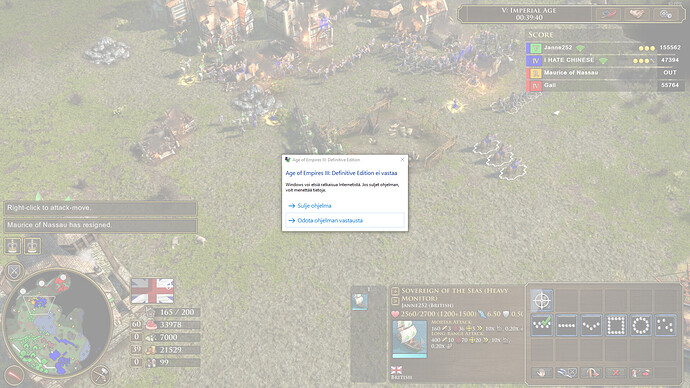 I have been consistently experiencing this issue as well. I play with me and my two brothers vs. AI (usually Hard difficulty), and it’s always in the 30-45 minute range where the game just freezes and force closes. The game is never tracked, and we don’t receive the XP we earned from that match. The most curious thing is that while me and one of my brothers receive the same treatment, the other brother so far has remained in the game. He says we get “dropped due to loss of connection” or something. It’s a very frustrating feeling that has been sapping a lot of fun from us. It’s always when we’re on the verge of victory (one time it was right as the final enemy surrendered), it has never been in the middle of a game where there wasn’t a large battle going on in the enemies’ base. Hopefully this report is helpful, and I’m crossing my fingers for a fix SOON!

UPDATE: After some deduction, I cannot confirm this, but I believe this crash is tied to AI surrendering. It seems to be a factor in 100% of the reports so far. Just something to consider to hopefully assist the dev team.

@DroganX4608 Funny how accurately my screenshot matches your description: 40 minutes, AI surrenders. It certainly does seem like the freeze is indeed related to AI surrendering. I hope this issue gets looked into.

I wonder if the freeze only affects the host of the game. In 2007 version disconnection of the host also meant the AI would completely stop. Does the AI simulation get transferred to the new “host” of the game?

I had a game last night where I encountered the error, but the other two players in the match didn’t. I was not the host of that game (if I recall), but I haven’t encountered any problems with host transference thus far. I’ll pay more attention to that and see if we can identify anything. When I did crash, the AI surrendered in under 30 seconds, but it wasn’t right as the resignation occurred.

My friends and I have been experiencing the same issue. we’ve had several 3v3 vs AI hards in a row freeze up like this. Two of us will crash while the third continues. Looks like it’s tied to the AI surrendering.

HOW TO AVOID YOUR GAME FROM CRASHING III - Report a Bug

well now u know how to bypass those crashes

I keep having this issue on most of my (3v3) games.

Its super annoying that this bug is not in their priority list. It makes the game unplayable.

its very sad that developers dont have this included on his priority list, they are ignoring the most important and crucial part of age of empires game