I know its too far down the line for things to change, but reading the wiki on the Cataphract, devs repeatedly admitted to Cataphracts armed with bows. (nevermind that total war reminds me of them almost daily)

Imagine how cool it would be if the byz had two UUs. The cata archer being an upgrade to the EXISTING CA. similar to imp skirm or imp camel

Would effectively be something like a cross between CA and ele archers. Partly make up for the lack of bloodlines…

So a similar concept to the imperial camel upgrade , but with different draw backs compared to other FU HCA. Lower natural arm, dps vs spears and hp compared to turks HCA. 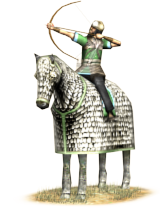 You mean a ranged cataphract that shoot arrows and do bonus damage against infantry? Besides, that cataphract archer has extra cavalry armor? It’s like a mounted plumed archer.

The Roman or Byzantine Cataphracts never used bows. They were armed with spear, heavy armour, they were using special type of horse and were very expensive so the emperors use them as bodyguards.

The unit that you mean are Clibanarii. Clibanarii were heavy cavalry that were armed smilliar to Cataphracts but they were using bows too.

But still cool idea to implement this in game.

Stats wise i haven’t thought of anything since there’s no chance of adding it. But I’ll have a think…

do bonus damage against infantry?

I don’t think so. But it could maybe do +2 damage to spearmen to make up for lack of parthian tactics (+4)

So it’s vastly easier to kill with arrows than a Turkish HCA, but harder to kill than any other HCA with anti cav weapons (similar to the cata)

That’s not necessarily true, while roman heavy cavalry is unfortunately poorly documented, there seems to have been both heavily armored larcers and cavalry archers during the late roman empire (see e.g. https://www.youtube.com/watch?v=X1KD_LJwFZQ).

Yes, Clibanarii were Lancers too. Whats more - they were lancers that were used mostly to counter other heavy cavalry like Sasanids Cataphracts that gave many troubles to Rome to conquer Persia.

But still Clibanarii were also using recurve bows.
Roman and Byzantine Cataphracts were not using bows, but Armenian or Parthian had Cataphract Archers.

But as you said, the late Roman Cavalry was poorly documented and it depends on historian.

So it’s vastly easier to kill with arrows than a Turkish HCA, but harder to kill than any other HCA with anti cav weapons (similar to the cata)

It needs some niche to be unique and useful. Your idea (harder to be countered like cataphract) seems good.

At the first glance of the post, I can’t think of a role it can fill. For example, anti-infantry, anti-archer, anti-cavalry, anti-siege, anti-building, anti-high-pierce armor, harder to be killed, lower frame delay. But there is at least 1 archer unit for each role.
Elephant archer, Genitour, genoese crossbowmen, mangudai, chu ko nu, rattan archer etc.

Longer range or faster speed (on par with Hussar) seems to be OP. Ignor pierce armor or dismount when killed like a Konnik is too OP. Perhaps just a tankier cavalry archer will be good.

I updated the OP with some stats

Perhaps just a tankier cavalry archer will be good

Its similar concept to the imperial skirm or the imperial camel. It’s an upgrade of an existing unit line. So it can’t change the role too radically.

Like Turkish Sipahi Tech just effects Cav Archers when sipahis were both melee and ranged.

Im in the boat that says sipahi should affect melee cav to some degree, possibly only scout line +10hp… It helps turks without changing their identity or being too strong…

I think it could fit in the tech tree if it was some kind of heavily armored anti-archer cavalry archer unit. So maybe lower DPS and mobility than standard cavalry archers, however more armor and some bonus armor against anti archer attacks. Could be cool, though I am not quite sure how viable it would be.

We already have anti cavalry archer-cavalry archer unit, camel archer. And i can’t see any reason to buff Byzantines.

but what I’m talking about is an antiarcher unit, not an anti cavalry archer unit. It would offer a more mobile and effective counter to archers (albeit more expensive) compared to skirms.

Anti Archer unit much OPer than Anti Cav Archer unit. And it think you can use your cheaper skirms for countering Archers. And it sounds like description of genitours.

as an idea for the cataphrac CA and please no hate

Imagine how cool it would be if the byz had two UUs. The cata archer being an upgrade to the EXISTING CA. similar to imp skirm or imp camel

Please look at what i have proposed as an idea

See, the thing with people that get hate is that they decide to shape an existing and balance unit to their own liking

I’m not an expert in balance, so I’d like to not make a comment on the unit stats as I’m sure there are people like @TriRem with actual balance experience that know a lot about balance.