China: Exploring more options without it being a general buff

I’ve noticed that some people here want a whole new China. I just have a few suggestions based on already existing elements of the civilization. These suggestions are aimed at incentivizing diversity of playstyles and not an overall buff. Basically tapping at unexplored potential.

just give the pagoda scaling by age, that way you get max 50% by the late game

Make their upgrade cards affect outlaws and mercenaries as well, at least Repelling Volley . It is hard enough already to go for this strategy without access to an arsenal.

Give them the same mercenary treatment as you did to Euros, since they were standing on the equal ground before DE: Infinite mercenary shipments in age IV, access to imperial mercenary upgrade.

Im ok with infinite shipments though

How about making Old Han great again in age 4 first?

a long time ago too.

or what, to make wood units

more viable for all civs in late games would be nice IMO.

In terms of quality in 4 ages it is better to go old han (with card) than regular army.

I am sorry but I see no benifits using Red banner (Old Han) in age 4 and 5.

Reusing Red banner in age 4 means all the invest on the Purple banner are wasted and you have to spend extra resources to upgrade Red banner from scratch. Average people don’t have enough motivation to perform these thankless tasks and roesources management, especially in the middle of a intensive battle.

And we know the the gathering rate of Wood are slowest comparing to Food and Coin. And Wood resources are rare in the late game. That’s why average people would rather using heavy horses and gunpowder units than archaic units, and saving precious Wood for making more military buildings and Artillery.

Besides, the super pathetic short attack range of Chukonu makes them harder to control than Arquebusiers. Chukonu’s range is only 12 (Arquebusiers’s range is 20), making them easily be kited by any other ranged units. They are also more powerless against artillery than other foot units. That’s why no normal people want to use them unless you are professional players with 300+ APM, no matter how high cost effecient people claim Chukonu are. I use Chukonu only in Age 2 simply because I have no other choices. If not so, I don’t want to use this…trash either.

I am not saying China is OP or UP. Actually I have no opinion about game balance at all. That is the test team’s job. I just play the game.

I just want to say, like the Grenadiers, there are lots of causes ecouraging people to decide to use a unit / abilility or not. The game designers can’t just judge wether a unit or ability is balanced enough simply by looking its cost efficiency. If a unit was designed, but using it takes extra effort and the designers couldn’t provide a decent situation for it, to convice people that it is necessary to use that unit to win, then I can sure that few people want to use it.

If I find that I only need to use certain units to win, why should I bother to study the usage of the other units? Very reasonable, right?

This is just a little thought about game design. Again, I have no opinion about current game balance at all.

I don’t wanna focus the discussion in Old Han Reforms, since it is a general buff and it does not open any options for China, other than the already existing standard ones. You can open a separate post if you wanna discuss it further.

I suggest you watch Julian’s videos for further information on how good the current Old Hand Reforms is.

actually Old Han is better than before.

Also the age 4 reform is best used for FIs where you basically skip any upgrades into the territorial army and just pour right into the reforms.

That is the mindset with china. You cant unlock everything max out, you have to make a choice beforehand and you have to build around it.

or you can sunk upgrades in to standard and old han army in age 2, but then your units are relatively wearker in age 3.

TBH I never consider China jumping from age 2 to age4 directly before. I will keep it in mind and put the card back. Maybe I will have opptunity to try it and see how powerful it is.

Flamethrowers: More speed and/or range so they don’t get countered by the unit they are supposed to counter just with kiting. Remember, China doesn’t have anything like falconet canons so these should be at least as good as leather canons. - right now they have a range of 10 and musketeer 12.

China not having falconets is not a good argument to transform flamethrowers into falconets/leather canons. India/Incas/Aztecs do not have anti infantry siege (China got flying crows to some extend), German/China/Incas/Lakota/Aztecs got nothing for missing musketeers. Usa/Haudenosaune git nothing for missing melee infantry…Tech tree may have holes

I only started playing with the DE, and heard that back in the HD, white pagoda was OP. I would be happy to see it as a viable option in addition to the usual summet palace.

Give them the same mercenary treatment as you did to Euros, since they were standing on the equal ground before DE: Infinite mercenary shipments in age IV, access to imperial mercenary upgrade.

Not into the imperial mercenary upgrade for iron trops. But infinite shipment of Manchus would be neat.

German consulate food trickle is too expensive to pick as an opening if you are going for Tea Export, I suggest decreasing its price to be able to afford it once the consulate has been shipped and build.

Not every consulate needs to be viable as opening. Japan do not open Spanish/Dutch, and Indians do not open French.

No need for that.

These are all overall buffs, but I’d gladly nerf some stuff here and there to see soke ot these happen.

I am sorry but I see no benifits using Red banner (Old Han) in age 4 and 5.

Well europeans do not use xbows and pikes in ages 4 and 5.

Old Han has its use when you can FI.

I use Chukonu only in Age 2 simply because I have no other choices. If not so, I don’t want to use this…trash either.

Let’s say that the white pagoda was especially strong in the old versions of tad where it was often used.
You give very wise answers.

Right so I’ve heard, which is why they overnerfed it. I did a full analysis on it if you wanna check it out. The discussion is also interesting, that’s where I got the idea from to give them multipliers vs cav and allowing them to snare.

What's the Worst early game unit? (and how to fix them) III - Discussion

Hey there, My thesis 1.Disciples in Supremacy are underwhelming when it comes to their role in comparison to other units with similar roles, even when taking into account cost. I believe the best point of reference for early game support-Hero trainable unit in this regard are Spanish War Dogs. To pick the White Pagoda Wonder is to sacrifice many other powerful options instead. This is why it is meant to provide you with a viable improved proper unit, beyond just a scout. Sadly even if you sp…

You have to invest 3 cards into that to make it possible. I don’t think many people in Treaty are gonna be willing to do that and if they do then that’s part of the fun. Remember that you are limited to producing Iron Troops to one building only and China doesn’t get the -40% infantry train time.

There’s also this unit in the game right now, that is spammable from multiple buildings and does benefit from reduced train-time 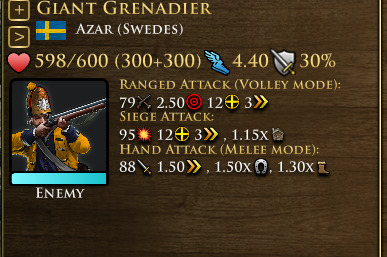 only 2 ( Koxinga and the training card) since everything else is already mandatory for a china lategame deck.

Two cards is nothing to sniff at. Germans get a card in Age III that boosts specific units (all mercs) by 20% in both attack AND hp. China has an age IV card that boosts a single unit attack speed (only range) by 20%, and it costs gold. This is why even pro player Julian (treaty king and top 3 in supremacy) calls the Koxinga card trash.

Regarding the possibility of the card being too much consider the following:

The card is considered bad now.

That does not mean that with the changes you want to introduce its power level will be the same. Its not a good argument.

The same goes for shipping speed and existing infinite shipments, sure those features exist-ish for other civs, but they also have different contexts and are balanced around that. Just because other civs have something and are not overpowered does not mean that giving the same thing to china will not make it overpowered. China is its own civ with its own design, and also arriving instant is of a different magnitude to just arriving faster.

This is not even just talking about non-treaty impact, do you also not remember when swedes dominated the meta with infinite 6 mam shipments?

So by that logic right now the only relevant bonus that Iron Troops have is the strength unit itself (which I don’t mean to downplay) and one bad card in Age IV.

I think that the problems with Iron Troops and other mercs is that your investment on them goes to the abysm because they are no longer relevant in the imperial age, unlike with other civs. So it just becomes and obsolete cool unit at that point.

They are definitively not comparable with Yumi, who are relevant throughout the whole game, countering light cavalry and heavy infantry with easy thanks to their range. Honestly this is very important, because you can get kited by skirms with Iron Troops and cannot punish goons nearly enough (particularly after caracole, and it’s worse if you are facing Portugal, who outrange them pretty much).

This is not even just talking about non-treaty impact, do you also not remember when swedes dominated the meta with infinite 6 mam shipments?

You mean this 900 coin infinite shipment? I really don’t think that these 2 are comparable… Of course making it infinite implies a buff to incentivize people to use it more but I think it’s far from OP in comparison. You would need 53 pop to make it equivalent cost-pop.

You mean this 900 coin infinite shipment? I really don’t think that these 2 are comparable… Of course making it infinite implies a buff to incentivize people to use it more but I think it’s far from OP in comparison.

It wasnt about cost pop, it was about the fact that you dont need to make anything else and just spam caro and send that shipment again and again for a nearly unkillable mass.

I will concede that units doesnt arrive instant, it has been nerf from what I can see.

How did you come to the conclusion that china is arrow based? out of the entire main comp china has 2 arrow units.

Heck if anything china is melee and cav based , there are 4 cav , 2 melee infantry and 3 of the cav are melee.

what does arsenal access have to do with anything, arsenal only provide 10% hp for archers (RIF doesnt affect archers)

have you also seen the stats of an imperial iron troops? 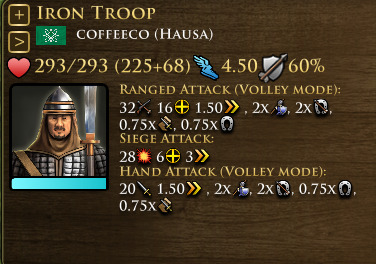 this is just from the imp tech with no infantry breastplate or the hausa combat card.

Its already faster, with more attack and comparable range HP compared the fully maxed out swede only imperial jaeger

It is out ranged sure, but range doesnt matter when you are pressing the enemy position, you do more damage, faster and do are tankier

however hausa could only have 2 iron troops

and thank god for that, can you imagine Hausa with guaranteed access to iron troops, now also with a 15% discount and the combat card