What's the Worst early game unit? (and how to fix them)

My thesis
1.Disciples in Supremacy are underwhelming when it comes to their role in comparison to other units with similar roles, even when taking into account cost. I believe the best point of reference for early game support-Hero trainable unit in this regard are Spanish War Dogs.

I believe that this situation is a result of an over-nerf from when China was first released, Disciples had more critical hit chance and could convert enemy units. White Pagoda rush used to be unstoppable. I think this should be revisited to find the right balance and make this unit useful (but not OP), and White Pagoda viable.

Here is a list of pets and scouts from Age II so you can judge for yourself. 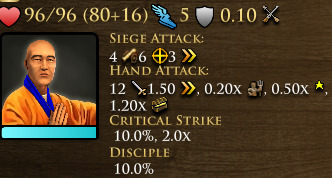 For the lols but they don’t classify Age II Envoy (50food, build limit 5) 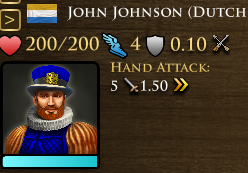 Also tricky to classify because of range attack bonus and because it is probably bug cause it doesn’t shadow tech to Age II but it does for the following ages, Age II Aztec Eagle Scout (80food, 5 build limit)

I do think you’re missing one factor here with Disciples being classed as shock inf- they tank skirmisher fire better. A bit of math here:
Skirms and most skirm-type units have a 0.75x penalty against coyote runner type unit, which results in a net 33% increase in tanking capacity. Furthermore, disciples have 10% range resist, unlike pets which have 10 melee resistance. So the net result is actually quite substantial! a disciple with 100 hp will tank
100/0.75 =133.3
133.3/0.9 = 148

so you’re actually getting essentially 50% extra ranged hp from skirms fire (only). honestly, not bad at all

I understand what you are saying, however as I said musk are the most prevalent unit type in Age II when you would most likely be placing your White Pagoda wonder in a supremacy game.

I think that the information provided is kind of cherry picking because context from other units is being omitted. You are also more vulnerable to other Age II units such as:

Pikes, Javelin rider, musks and only have a perk vs skirms (without taking into account that you just have 5 speed unlike other cav/shock infantry 6.25 so good luck catching them).

I invite you to share with us the same math for disciples actual hp vs these units as well.

I am also interested to know, is there anything that you agree with from the post @dansil92 ?

Edit: Here is a video of you praising tigers for not having a shock infantry tag TIGERS are Overpowered?! WHAT!?! | Strategy School | Age of Empires III - YouTube

Not all units and strats need to be perfectly viable all the time, and that is completely fine. Disciples alone won’t and shouldn’t win the game, but they affect the game just the perfect amount imo.

yes, musks are very prevalent in age 2, but ckn also happen to be the second or 3rd most cost effective anti-musk unit so its really quite strange to worry about musks age 2. this actually contrasts quite a bit with spain, who has absolutely awful units to counter musks (age 2). India is a whole different story, but tigers require a pretty large investment to be able to train them-- that being said, tigers are the strongest pets available and are indeed quite a ridiculous unit in certain matchups (russia, inca, aztec, china). I agree that the pagoda needs some sort of buff, but since disciples are available by default AND the Chinese monk is an absolute unit of an explorer (in contrast to spains default euro explorer), i see absolutely no reason for base stat disciples to be modified. Oh, and china already has 220 pop, and disciples thats already kinda nuts ngl

If the argument is that these support units should help compensate for a civ’s weakness, then disciples should be (or become with White Pagoda) an anti cavalry unit (multiplier). If this is the case I would honestly completely be fine with it and I even think that it’s better than my own original proposition as a fix for the unit and for making White Pagoda more preferable for certain match-ups.

On regards to that initial investment you speak of, I really think that it isn’t nearly as comparable to disciples cost. Sacrificing Summer Palace for White Pagoda + 225 wood Saloon cost + 300 food, 300 gold for upgrades to get a 136hp, 17 hand attack cav unit that is slow and cannot snare compared to either sending 1 card (that buffs your heroes by the way by a lot, since you threw that into the mix), to get a 144hp unit with no infantry tag and 18 hand attack or even if you go for the investment of no cards and automatic 10 build limit, paying 225wood Monastery, 75food 75 coin for a 156hp tiger 15 hand attack (which if you want can send a card to boost it to 17).

I am happy to see however that we agree with White Pagoda getting some kind of buff. I’m interested to see what you think of the first paragraph specially

since I’m involved in modding here and there, I’d actually considered giving disciples an anticavalry function, but the issue there is that it would then need to be classed as an anticavalry unit (heavy infantry). This would have a few hidden perks (certain guardians having the cavalry tag) and obvious downsides (bad vs skirms and artillery. Im not sure china would be thrilled about another paper thin heavy infantry, but that’s just something to consider.

Sacrifiing the age 1 trickle as india is a pretty big deal tbh but the 60% buff to the monks is really solid.

If I were to suggest an actual change to the pagoda that i feel would be interesting without being massively disruptive, I would make the pagoda build faster than the other wonders, probably -30 build seconds by default, which would give interesting aggressive options or a nice transition to fortress if you’re delayed in age 2

Im not sure china would be thrilled about another paper thin heavy infantry, but that’s just something to consider.

Right I completely agree with this; which is why I was thinking something more between the lines of a shock infantry version of the Cheyenne Rider, that has cavalry tag and has multipliers vs other cav as well.

This in line with fully embracing their shock infantry tag and giving them a snare ability, while also compensating for their 5 speed (slow for Shock infantry) with this multiplier. Additionally it would make sense with the esthetic changes too (if devs decide to do any of that), while also keeping them distinctive to Rattan Shields or even a regular pikeman.

Cherry on top would of course be what you propose in your final paragraph since China is infamously slow to age to II.

Spanish dogs are strongest than tigers. UP DOGS!

since I’m involved in modding here and there, I’d actually considered giving disciples an anticavalry function

Any news on this experiment Dansil? How did it work out? Did you keep their shock infantry tag for a one of a kind mini-Cheyenne rider or you changed them to heavy infantry?

… And they are Catholic because the anointing affects them.

Omg, that dogs has FAITH

Considering that they have a wonder that “improves” them, then they should be more relevant than other “pet” type units.

for the time being I haven’t gotten around to actually testing anything with china yet (been working on 2 new civs) but its on my to-do list. China just generally needs better anticav options

Looking forward to hear from those results.

Agreed. This could be a good opportunity to kill two birds with one stone.