The official feedback thread for the new co-op feature in Age of Empires II: Definitive Edition. Please use this thread to give us your feedback on this feature and what you’d like to see from it in the future.

Trying out the Japenese one with my friend right now, everything is going great beyond one small desync but it’s been fine from there (happened when a trade cart tribute was brought to the palace)

However one issue, the trade carts built from the markets just walk to the other players markets and stop there, they aren’t working. If this is intentional, I don’t think they should be enabled to be built? Lots of resources just went out the window

That’s weird, when I tried out the scenario in the preview update trade carts couldn’t be created.

There seems to be an end cinematic/outro, but no introduction or even a short description/prelude.

I know many people are wishing to play in a Co-op Mode and thankfully we finally have them. However the current Co-op for historical battles and campaigns are quite lackluster and I hope it is not just another side project inserted into the game like the Battle Royale mode…

Here are my reasons why:

I really want more for this mode. I hope we get there in time. 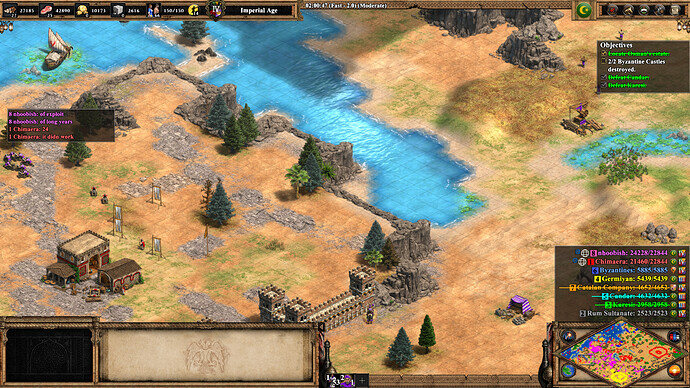 I just played it and it worked just fine. I didn’t get any ally among the Turk factions so maybe choosing an alliance isw hat caused the bug for you?

Would it be possible to add a the feature to pick civ in the campaigns? Think this mode would see a lot more use if players can choose their civs while playing together.

See a lot of potential here though.

I tried the Hastings (1066) campaign with my partner to test out the new co-op campaigns and it’s fun, however, I think the Saxon Navy at one point stopped rushing with Huskarls and when we went to raid his base, they were all stuck in his town center for some reason (as if you enabled aegis and spammed creating units) 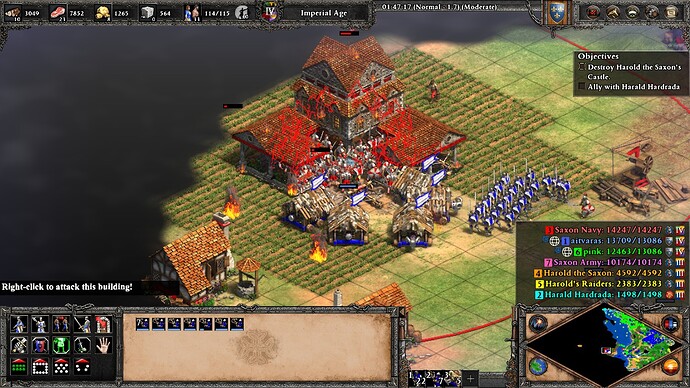 also played hastings, was fun and challenging. sometimes the red warships would sail right past some units i was trying to land with transports, but nothing totally game breaking. thanks for the hard work you guys do!

Love the Co-Ops. It’s a little clunky still though.

Same happened to me… They didnt even figth back…

I’d have one suggestion:

Move the sheep pens in Honfoglalas campaign. It’s very easy to accidentally capture your ally’s sheep in their pen as you’re moving some units around.

As for gameplay during the campaigns, no bugs experienced, finished all 5.

Played Hastings, was not challenging on hard.
But it did not crash.

Played Kurikara and got an out of sync 2 minutes after both allied castles were claimed.
edit: 1, went out of sync with a different teammate, but 10 minutes into the game.

I played Bapheus and Tours. The turkic campaign was via the lobby browser with a random guy and the frankish one with my brother. Overall connection was fine. The games were just way too easy. Even on the hardest difficulty there was no threat at all so I think the difficulty needs to be adjusted to accommodate the 2nd player. I really love the idea of coop, but so far this mode is not too enticing. I think there needs to be a bit more variety and difference when compared to the single player experience.

Played all 5 scenarios with my uncle. We only had some trouble with Kurikara and Tours:

We attempted the scenario three times, with the host (me) crashing on all attampts. The first and second crashes happened after defeating all 5 Taira Princes. The third crash happened before slaying any Taira Princes, after taking control of both cities

The AI didn’t seem to create any new villagers. We were attacked every now and then by a few camels/Mamelukes and once by a ram with some pikemen. Needless to say that, because of this, the scenario was overwhelmingly easy.

Even with those inconveniences, the Co-op campaigns were extremely fun to play. Something I particularly enjoyed was when the players were given different roles at the start, for example, in the Honfoglalás scenario, where one player starts with Light Cav. and the other with Cav. Archers. This makes so both players can contribute meaningfully to success and makes for more fun and interesting gameplay. I am sincerely excited for the development of more Co-op Historical Battles and Campaigns and intend to continue to provide feedback whenever possible.

Another update. After playing through all of them - we only had our original desync and trade cart weirdness on the Japanese scenario, and a really weird ending to the Turkish scenario that was unsatisfying.

What just happened was: We were in the process of killing the second Turkish rival, and our ally Candar killed the right Byz castle, we killed the mid one, and then the Catalan Company took over the 3rd castle and went “Byzantines betrayed us bye” and the last Turkish rival, them, and the Byzantines resigned. It was a really weird ending and I’m not sure it was intentional for the Byzantines to defeat themselves by transferring that fort and then the Catalans resigning immediately after they showing up.

Awesome idea and I’m absolutely loving it so far. I got my girlfriend into age of empires and we’ve spent a lot of hours just battling it out against the bots together. As soon as the 5 maps for coop were available we crushed them in a night. I am so exited for the full release, everything was seemless in our experience. One small complaint is the lack of proper introduction before the match. As well some objectives seemed a bit unclear, for instance the middle map, (cant remember the name ATM) said collect 20 sheep and it was unclear what it did or what happened when we got all 20, also seemed impossible for both players to achieve this. Keep up the awesome work I commend the devs for breathing new life into the game.