Naturally, though, there’s always an obstacle. Invariably, when I try to publish my mod I get the following error after it tries uploading for a few minutes

This error is invariable and occurs every time I try to upload it. I’ve put a lot of time and passion into this mod and would like to have it available to the public asap, and have no idea what the issue is,

Is it a filesize issue? The entire mod file is a little under a gigabyte
I read on another topic that it could be related to inappropriate content, which I have no idea if that is what’s going on here or not
Thanks

The entire mod file is a little under a gigabyte

Iirc the mod workshop has a size limit of 500Mb, at least that was the case a couple of months ago. Could be the issue.

Waiting on Dodo’s response, but if that’s the case and it’s incircumventable I reckon I’d have to split the mod into two separate downloads

After an hour or so of uploading one of them (the 470) it gives me the same error.
It was uploading for much longer than it was last night so i know it was actually making progess doing that

So, despite the fact that it said there was an error uploading the first volume, it appeared on my “My Mods” and the file size seems to be consistent

I just tried to upload the second volume and got

Mod size limit should be removed, because it is quite easy to reach it with UHD graphics. Forcing people to split their mods into multiple parts makes things just more complicated for people.

We’ve considered making the limit larger or removing it. The main concern is wanting people to be aware of the size before the subscribe in game given some people are on metered internet connections. We’ll discuss further.

Could just display confirmation dialog, so that player could decide, whether he wants to download mod with big size.

Ag3 and the ui, both of which are about 480 mb, have successfully been uploaded and are downloadable (despite the fact i had to upload them several times blindly)

One massive issue though;
It consistently freezes or crashes when i try to host multiplayer - with friends that also have the mod.
Have been testing it for the past hour or so and we have not been able to start a single game with it, and most of them have higher end computers than me. The lobby will freeze
And look like this 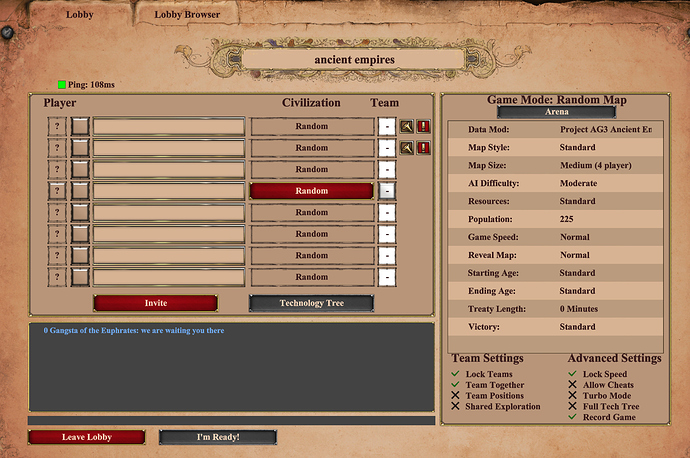 (Screenshot taken by my friend) before freezing and requiring to altf4

only way to fix it is separate all the graphics into one mod and permanently activate the mod, separate only the data file into separate mod and select it in skirmish, this should fix your crash issue.
Game crashes when it has to register so many files.

separate all the graphics into one mod

This was the plan, but that amounted the mod file to being 900~ mb which is over size limit

permanently activate the mod, separate only the data file into separate mod

Apologies, I’m having trouble discerning what you mean by this. Make a separate mod for the data file?

One good development, though
We got in a lobby and managed to have one successful 4v4 against the ai with the mod!
It required waiting through the freeze-up it does when it tries to activate the mod, though, which it’s crashed on before.

Make a separate mod for the data file?

you may need to further divide it into 2 mods.

It is currently two mods.

https://www.ageofempires.com/mods/details/15396/
The first volume contains the data, sound files, and the majority of the graphics

https://www.ageofempires.com/mods/details/15401/
The second volume, which must be enabled, contains the user interface and more graphics (that did not fit into the first volume)
THey are both around 480 MB

It is currently two mods.

I know about that there are two mods. but that’s not what i am saying.

Alright. So to clarify you’re suggesting to divide it into another volume, with one just being the data, then the others being the resources?
My apologies, I’m not intending to pester, my reading comprehension can be hit or miss
Thanks

Alright. So to clarify you’re suggesting to divide it into another volume, with one just being the data, then the others being the resources?

yes that will put less load on the dataset mod, since it will have less files to register when loaded into game.