Can you please confirm whether or not this includes the existing issue where creating a lobby and the lobby doesn’t show up in the lobby browser?

This has plagued everyone since day 1 and it is really frustrating when I have time for a quick game but, instead, I spend 20 minutes creating and leaving lobbies over and over hoping eventually it will finally show up in the lobby browser.

Also, it would be very helpful to be able to change your lobby name once inside.

I highly doubt it will be the case

Cool, hopefully the campaign balance fixes will mean more than just fixing the mixup with the sword icons.

Sounds great! Hoping for a civilization builder in the future! 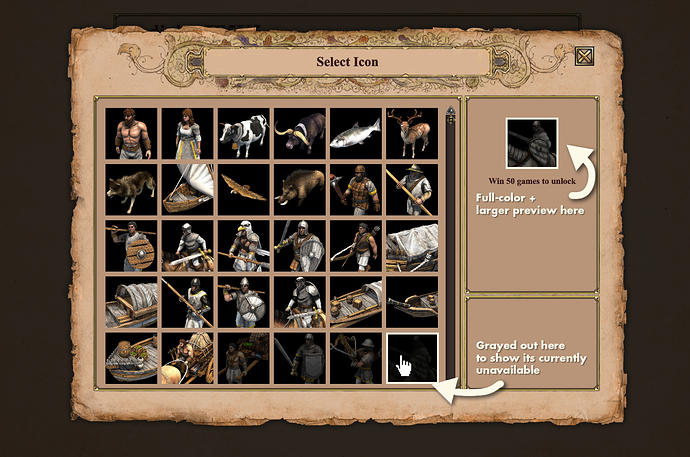 We already have no water map and so few hybrid maps, and I am afraid that this ban system will eliminate naval battles completely. I say this not because I prefer water maps. I use random civilization and I basically just play and learn all the maps the system assigned to me. I say this because I think the game should be more diverse, not be more one-dimensional. After all, the ships are an important element in this game and we do have naval civilization, right?

It may be too early to judge since we don’t have the list of the maps yet. I hope what I worry not come true, and I still have chance to see some naval battels in the ranked games.

And I suggest add a tutorial introducing the water/hybrid maps build order in the Art of War section. This may help people be familiar with these maps.

I hope some improvements will be in clan pages like a Clan chat, the rank of players beside their names and hopefully a global chat in lobby browser (rank and unranked)
Also save and exit option in multiplayer could be great!
Thanks for your continuous support to this great game!
Keep on the good work!

Nice! Looking forward to the patch

Cant wait for the new patch!

When is it out?
Any updates?

Are the following things fixed?

Certainly some of them!

When you have the opportunity to play the build, let us know if anything has not been fixed by visiting the bug forum, searching for any threads regarding them, and creating a new thread for any issue that doesn’t already exist there!

May there be the mahouts and the soldiers on the War Elephants’ backs one day?
Like this MOD in HD’s workshop, it looks real and amazing rather than just an elephant.

Then give Teutons the Light Cavalry and Husbandry at least, maybe let the Teutonic Knight mounted as a weak knight in the beginning, easy to be killed and then stand up in the original infantry mode, such like the Konnik.
Come on please, they were such a famous Order of Cavalry instead of tower builders and siege weapon drivers.

Will the random villager idling be fixed in the upcoming update? and the attack indication on farms in unexplored areas?

This update is looking awesome but…

“+1 here. I appreciate the size of the patch, but with streamers still having issues and the first official tournament set for early January, I had hoped that would be in the notes? Perhaps it just isn’t mentioned, I hope?”

Not to mentionn that the tournament NAC3 (Nili’s Apartment Cup 3) is sponsored by Microsoft with a big prizepool added by Microsoft … and that tournament isn’t far away so I think it’s QUITE important, which is the undertatement of the year, that the spectating issues are ALL fixed before then!

EDIT: This includes being able to find multiplayer lobbies when set to “public” at all times. Because if that isn’t fixed it’s going to continue to make spectating difficult.

The two major spectator bugs are the invisible lobbies, making it hard to spectate in the first place, and the game speed slowing down frequently during spectating, if I recall.

What we require in the AoE2DE game:

1.This is a request to all the amazing devs of this beautiful game. Myself as well as thousands of players creates and uses complex and epic mods for each game we play ,I for one love using Independent Architecture and Independent Unit mod data set for every game.
What we need, to enable ease of use for creating and using beautiful Dataset mods are the following:

For the devs to add a button in the main menu that allows you to select and load a Mod Data set that becomes active immediately, thus allowing you to enter a campaign/Scenario/saved game editor with the Mod Data set loaded and activated, negating the current necessity to first enter “random map” game, select the data set, enter the match and then exit the match just to have the data set active.

Please, for us whom spend countless hours creating and endlessly testing and then using data set mods, this is a dire necessity.

Yes, I have so many Ideas for needed civs.

Civilizations to be added in game.

New Civilisations to add to the expansions:

1.Armenians. Amazing history spanning from Roman times to the rise of the Ottoman Empire. Perfect for use as Byzantine allies against the Persians and Turks.

Campaign against the invading Ottomans can climax in the siege of Vienna.

The Tutonic knights were actually famous for their foot knights. The Frankish knights were the most proficient on horseback, hense why the Paladin of the Franks is so strong. (And rightly so.)

Maybe developers could increase unit selection limit now when most urgent issues have hopefully been dealt with? This idea has been very popular both in Reddit and beta forums

Hello @GMEvangelos. Thank you for all the good news you bring us!
Can I ask if you are going to make some improvements regarding some “offline” game experience issues?

I can link you to this topic because I’m particularly interested on it:

, I need an advice from you. I am going to make LAN-party with my friends. We were always playing old AOE2 together, but this new remake is problematic. I cannot entre multiplayer section, which contains LAN game, withou connection to Steam. Is there some way how to create and join LAN game without internet? Thanks a lot guys, have a nice day

But I saw that exist other kind of issues when the internet fails and you result being offline…
Doing a fast search through the forum I found this topic:

I am playing Windows Store version of Age of Empires 2 DE. My internet has issues occasionally. My issue is that Campaign works fine when i am connected to internet. But when i start the game when net is not working, it doesn’t recognize progress of my campaign. Example: If i Was in 4th Campaign Scenario of Saladin, then when i play offline, i have to start from 1st Saladin scenario. Is there any method to fix the issue?

Thank you in advance!