So, lets say you are a German, you have an all around composition of units, you are vs Atzecs and they only have 1 unit type, the eagle runner knight. 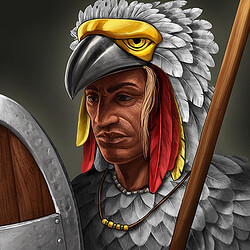 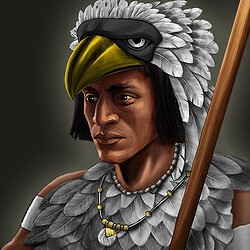 I died in that scenario, the guy just spammed eagle warriors and NOTHING stopped him, I ran out of resources before I could get a good counter, which I couldn’t do anyway.

So, what the heck, what can I do if another guy spams this unit? Cry? :C

Maybe it’s a bit overpowered, should it get a negative multiplier vs ranged cavalry? (But what if 2 Aztecs attacked each other with the same unit, it seems so easily spammable).

They are like dragoons, you counter them by using skirmishers.

Quote by the wiki

They are like dragoons (they are the best in terms of cost/strength and population efficiency, so only skirmishers can defeat them.

They are like dragoons, you counter them by using skirmishers.

so only skirmishers can defeat them.

NO you guys, check out this video if you don’t believe me.

They are NOT countered by skirmishers or other light infantry because the ERK is a shock infantry unit.

Here are the details on why skirmishers are not able to counter them:

Ranged cavalry are a counter, but only if they have range resistance and hopefully a fast attack speed, as well as movement speed, otherwise the ERK can just avoid the fight.

Oh shoot! I know now why my artillery made so much damage before!

They are tagged as shock infantry, ok, BUT, they are also tagged as ranged infantry, so between both multipliers that artillery have vs those 2 tags, the infantry tag makes them do the most damage possible.

So next time a ERK spammer attacks, one just has to make a whole lot of cannons and light cavalry to attack.
The cannons do the damage and the light cavalry are the barrier to do even more damage if they get close while they shield the cannons.

The video shown above is a really bad example to showcase why ERK is better than Skirms. The reason is because, Skirms have 20 range and they have multiplier vs ERK. 2nd Against Aztec you do walls + skirm spam and musk if you can make them plus some mortars if not Then skirm + dopel ( considered a pike unit ) then place them in cover mode if eagle comes close and melee mode when coyotes nearby and keep sniping eagles from afar. There is 1 thing that will happen. The aztec player will drain faster than you if you do it right. Against aztec doing cannons is useless with the exception of Mortar. Other than that just spam skirm/dopels/walls/mortars next time you face an aztec Use your range. Kite them to death

There is a bit more then that

Skirms do have a .75 multi vs shock infantry, the same as they do to cav.

But like skirms have a x2 multi to light cav specifically, these two multi interact so that skirms deal x1.5 damange to goon type unit.

Its the same with the ERK, there is a hidden x2 multi to ERK specifically so that skirms still deal x1.5 damage to ERK, its listed in the wiki.

So technically they are a counter but as for the reasons you listed, head on they lose, usually you want to kite them as much as possible since you do outrange them and then wittle them down, use other units as well as tanks to absorb damage so you can fire away scot free, my sugesstion is use dopps in cover mode and just march towards them while your skirm fires from the back, aint nothing they can do.

If they try to rush coyote towards the skirms then just use the dopps to chase them off.

So, what the heck, what can I do if another guy spams this unit? Cry? :C

I reviewed everything you said and you are right in everything, but there is a solution to your question:
The answer is Make pikemen with the doppelsoldner upgrade cards and use the church cards and advanced arsenal so that your pikemen get 6.5 speed and use the politician to have imperial pikemen.
ERK only has 6 speeds. I confess that I haven’t tested this but I believe that fully upgraded pikemen (Imperial pikemen with cards (upgrade from doppelsoldner), and with 6.5 speeds) will win very easily.

Another option is to use Corsario Barbaro or Swiss pike mercenaries, also with the speed upgrades and the advanced mercenary card, but that would depend on luck finding these mercenaries in the saloon.

That would be a nice strategy, certainly something to keep in mind for the next time i’m vs that kind of Aztec player.

However, they still have melee resistance against a ranged unit, my opponent wouldn’t have let me off his kiting that easy, not even sure that all civs have the enough upgrades to make heavy infantry as fast moving, but if you can really get a heavy infantry mass that’s quicker than the ERK then it has a chance to come off victorious and with a cost effective exchange.

Either way, it would certainly work vs an opponent that isn’t paying as much attention to my troops. 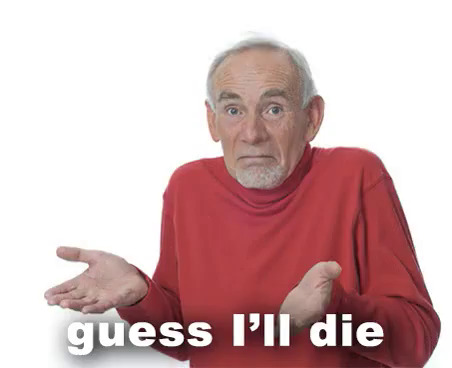 Thanks for all your comments, I appreciate the help

Well, tried it myself just now, dragoon type cavalry (With range resistance) are the only units that can make a stand vs ERK, skirmishers just fell to my feet (Whenever dragoons weren’t around).
Artillery are also a danger, but just get stagger mode on the ERK and you will be fine.

ERK are the best single pop unit in the game, its what props up app their weaker or inefficient unit type responses. They are really the best Single pop inf inf in the game and are pretty hardy no matter what.

Even though the cinematic is convincing, from thousands of games (note Legacy games) of real work fights ERK is countered by skirms. Its not a hard counter since they are similar units and the ERK has a ton of HP and resist. That quality will buy the aztec person to buy time to switch tactics or run out of eco.

Cannon are good if you are protecting them with some kind of melee unit for Germans, waves of Dopples are perfect. If even a few pretty much make coyotes runners die in their tracks. They even have good multipliers vs ERK too if you get them in the fight. Fast dopples is recommended with all the techs and cards except the soligen steel card that buffs everything at cost for speed.

TLDR: Eagles are goons and goons are weak vs skirms/archers and hand infantry. that get close.

I’ve always found that hand infantry are quite effective if you’re fighting Aztecs, since Coyotes are more numerous and skinner than cavalry making goons less effective. So if you’re smart you already have hand infantry which are effective vs eagles. Dops have a huge AOE eagles are more tightly packed than goons and skirmishers provide cover fire.

Yes Skirmishers are the ideal counter but think about this: Eagles will die very quickly if they get in range of Pikes and Dopps.

So basically Doppels with skirmisher so soften them up.

They are ranged infantry, but not infantry. The red icon doesnt applies for them, sorry!!
Canons are effectice cause they have lees space than dragoons and hace less HP.
Upgraded Skirmishers beat them I play azzys and coyotes are a must for them. Try canons + doppels and some Skirms

Be careful with HI, JPK kill them like a Knife cuts butter. Also doppels/sams are the exception

He doesn’t have a “goon” or light ranged cavalry tag.

Skirmishers do counter light cavalry, but ERK are shock infantry, like a coyote warrior with a ranged attack.

Compare it to a dragoon that does have the tag. 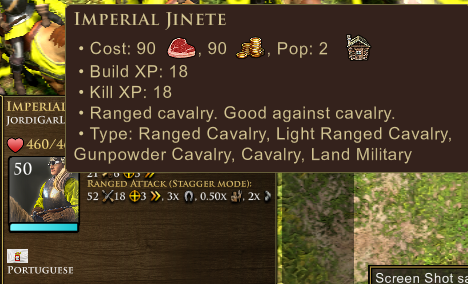 If it really is meant to be countered by skirmishers, they should have the tag, shouldn’t they?

Shock Infantry is like Cavalry, which Skirmishers dont counter BUT ERKs have ranged shock infantry tag which is countered by Skirmishers with a bit smaller bonus than light cav

I assume this was a mistake, as the warchiefs expansion was hilariously buggy, unbalanced and inconsistent with its tags. melee heavy infantry have a bonus vs the “light infantry” tag, and actual ranged light infantry have a bonus directly vs eagle warriors and a malus vs the coyoteman tag. abus are an exception, and have a .5x malus directly vs the “light infantry” tag and a 1.5 bonus vs eagle runners, meaning they don’t actually counter eagle runners.

that means light infantry have a 2x bonus vs eagle runner knights and no penalties, unlike with cavalry/light cavalry. they will still lose 1v1 against them though, you must have numbers advantage. removing the confusing and inconsistent coyoteman/“light infantry” tags and rebalancing coyote runners and eagle runners around cavalry/light cavalry tags would be the best way forward.

hidden tags and inconsistent/counter intuitive bonuses/malus have always made the native American expansions in aoe a downgrade to the vanilla games balance and clarity. aoe4 should avoid the needless and dumb mistakes of classifying native American warriors with their own counter system that breaks with the previous system and requires reading the game files to understand how it functions. there’s a reason the war chiefs expansion was the worst product ensemble studios ever released and its online player base was a joke. it was half baked, filled with random bs and hidden mechanics.

the coyoteman tags have no icon, and direct bonus vs units also have no icon, so it is not possible to understand these interactions without digging into the game files. there’s nothing in game that indicates that light infantry deals bonus damage vs eagle warriors, or have a penalty vs melee shock infantry.

They cant do that cause shock infantry dont have the cav’s HP/Attack.
Like have you said Skirmishers have a bonus vs ERKs, as I said before… because ERK is the only unit with that “tag”

eagle runners have among the highest attack/hp per pop of any unit in the game. there is no 1 pop light cavalry unit that can compete with them, either Keshiks, zamburaks and Ruyter compare badly against them. they are among the most pop efficient unit in the game.

then there is the coyote runner, and the exact opposite is almost true.

they should be rebalanced around having the cavalry tag, rather then being ported into the tags as is.

there is no eagle runner exclusive tag. light infantry bonuses are directly against the unit, hence no icon.

I know that OMG because ERK is unique, they dont need a Tag for one unit and skirmishers are the only ones with bonus vs light cavalry specifically