I recently recreated Spirit of the Law’s overpowered civilizations as a data mod with the Advanced Genie Editor and I thought I could show you guys how I did this. This guide is a bit long, so I’m dividing this into four parts.

The free Wheelbarrow and Hand Cart bonuses are defined under the Vikings Tech Tree. Specifically, they are defined by the four effects commands that start with “Set tech…”. Copy those four commands, return to Spanish Tech Tree OP, and click the Ins Copies button. Be aware that pressing the Paste button will overwrite the first four commands with those Vikings commands.

Now let’s start replacing the Byzantine bonuses with the OP Cav bonuses. Byzantine civ bonuses have Techs index numbers of 283, 284, 397, 401, 417, 418 and 419. The non-tech tree bonuses for the OP Cavs have the following Techs and Effects indices:

With these indices known, we copy and paste the original Techs onto the Byzantine Techs one at a time. To keep it simple, paste Cavalry +20% onto tech 283, +150 food onto tech 284 and so forth. After after each paste, be sure to change civilization dropdown box to Byzantine. There will be five Techs to copy total, leaving you with 2 extra Byzantine Techs. To deal with the extraneous Techs, set the effect index to -1 and rename them to prevent any confusion. Deleting these unused Techs will probably won’t screw up AOE2, but it will change the index numbers, making my spreadsheet kind of useless.

Now lets copy the unique techs. Stirrups, the Castle Age technology, has a Techs index number of 685. Copy Stirrups and paste it on top of Greek Fire (464). Don’t forget to the change the civilization to Byzantine. Do the same with the Imperial Age technology Farimba (577), pasting it on top of Logistica (61).

Now let’s test this mod offline. To do this, navigate to your local mods folder. This is usually located at C:\Users(username)\Games\Age of Empires 2 DE(steamid)\mods\local. In the local folder, create a folder and name it “SOTL OP Cav civ.” Inside SOTL OP Cav civ, create a folder named “resources” and a file named “info.json.” Editing info.json with a text editor, paste the following line of code:

The “Title” field is the data mod name that shows up in the game settings menu.

Inside the resources folder, create a folder named “_common.” Inside _common, create a folder named “dat.” Inside dat, place the modded empires2_x2_p1.dat file (you aren’t editing the original empires2_x2_p1.dat, right?). After setting up the mod folder, the OP Cavalry Civ will now be playable (remember that the data mod always resets to default when you play a standard game).

The tech tree for your OP Civ will still show the old Byzantine tech tree. Given that you’ll be spamming cavalry units with this civ, though, I don’t think that’ll be a major issue. Plus, editing the tech tree appearance is honestly not worth it, given you have directly edit the original JSON file.

Part 2: More Unique Techs and Units Notes
If you are porting over two unique techs from the same age, you need to edit the Required Techs and Button boxes under the UT’s Techs entry. Supposed you want to give your OP Archer Civ Kamandaran and Pavise, two Castle Age UT. For the UT you want to place in the Imperial Age, change the required Techs from Castle Age to Imperial Age and change the Button value from 7 to 8.

Let’s also say you want to change the Aztec’s unique unit from Jaguar Warriors to Mameluks, as seen with the OP Monk Civ. To do that, copy the two Mameluke Techs entries (269, 368) and paste them on top of the Jaguar Warrior entries (431, 432). You won’t be able to research Elite Mamlukes yet, though. To do that, go the Elite Aztec Mamluke entry (432) change the required Tech from the original Mameluke tech (269) to the new Aztec Mamluke tech (431). Don’t forget to also change the civilization to Aztecs.

Note that the default AI will not recruit unique units if that unique unit is from another civilization.

Part 3: Khmer No Building Requirements and Shadow Nodes
The OP Gunpowder Civ in the mod has the Khmer’s no building requirement bonus. To give the Gunpowder civ this bonus, copy the Khmer requirement tech (638) and paste it onto a Goth tech (I used 327). In the pasted Tech (which I renamed “Gunpowder requirement”), change the civilization from Khmer to Goths. You will notice that all other dropdown boxes have a value of -1, which means this tech is automatically researched when you play as the Goths.

I can’t edit the original post anymore, but here are screenshots of some of the things I talked about: 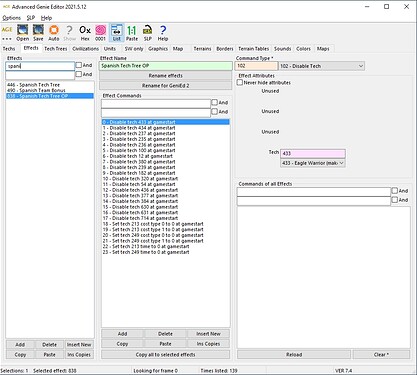 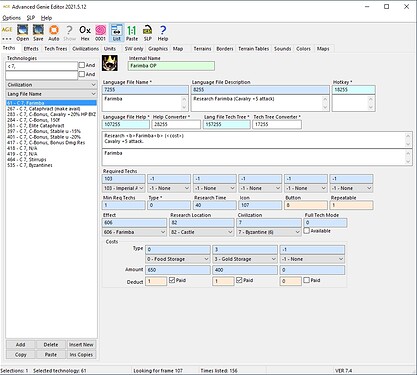 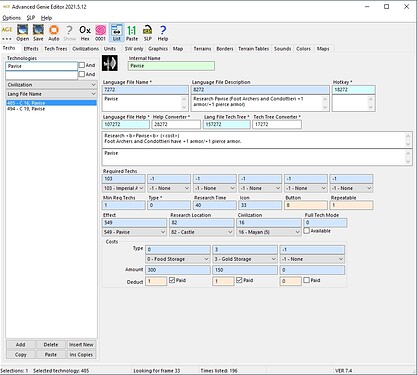 Modded Shadow Node tech that removes all the building requirements for the Fast Imperial Civ, due to tech 327 (Gunpowder requirement) being added as a required tech: 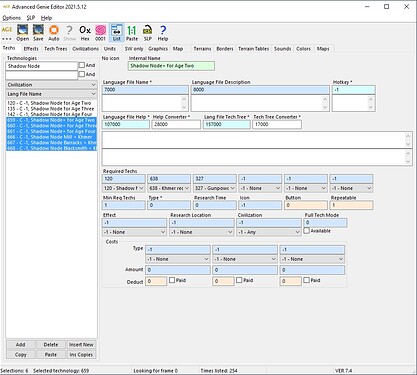 I recently uploaded a new OP civilization: the Casusin Berbers. This OP farming civilization is based on a post by casusincorrabil and has the following bonuses: 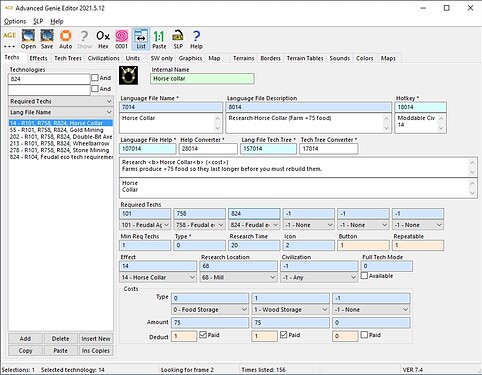 The other tricky thing involved trying to get the Folwarks to work with Farm upgrades. The Casusin Berbers have the Sicilian’s farm upgrades, which means that a Folwark should instantly gather 32.5, 57.5 and 92.5 food from a farm in Dark, Feudal and Castle respectively. However, when I originally uploaded this civilization, the Folwarks gathered only 17.5 food regardless of age. In other words, the Farm upgrades were not increasing the instant gather amount, and Folwarks were not gathering 10% of the farm food.

The reason for this was that the (Berbers) Folwark bonus techs were using the Poles’ Folwark as opposed to the Berber’s Folwark as a required tech. Also, the Folwark bonus effects don’t actually multiply Farm food by 0.10. Instead, three effects (821, 822, 823) add 7.5, 12.5 and 17.5 to the instant gather amount when Horse Collar, Heavy Plow and Crop Rotation are researched. In turn, to match Sicilian Farms, I copy and pasted those three existing effects and changed the instant gather values to 15, 25 and 35. 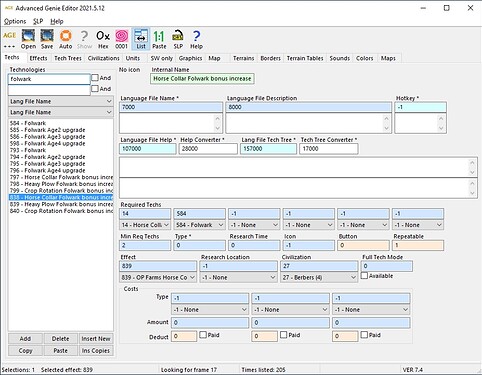 And here’s a screenshot of the modified Horse Collar Folwark effect that will be used with the Casusin Berbers’ Folwark Horse Collar bonus tech: 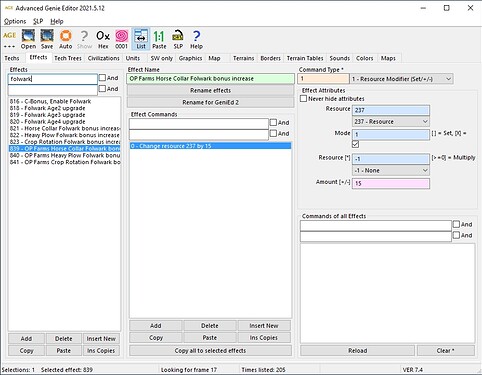 Any mods around? This should be top of the stickied list yesterday! THANK YOU! There are far too few tutorials and guides around for modding aoe2DE and this is one of the best ones I’ve seen anywhere, much less on this specific forum.

Your custom data file will not work if it’s missing civilizations. I don’t think Civbuilder has been updated yet to include the Indian Dynasties civilization.

I was trying to export the necessary information for those Civilizations from Advance Genie Editor and incorporate them into Civ Builder. I have access to the code for Civ Builder. I am trying to figure out how it works so if for some reason Krakenmeister can’t continue to update for some reason, I can still continue to update and add content myself. I am trying to figure out how he got the Civ information to incorporate into the code I am seeing if it is possible to get that information from Advance Genie Editor. I have found the information I need, I just can’t export it. I have found another solution its just much longer and harder and if it is possible to export what I need directly, it would save a lot of time.