Thanks!! Really apreciated ! I like the trebuchets idea aswell, their reloading time fits perfectly for an animation with a boulder and people loading it!
Hmm i haven’t thought about the tannery, that’s a good idea well done!

Having a limit cap of castles to build in game (such as 2 or max 3 in late game) would be fantastic at least for me, but always having the option to build them again if they are destroyed.

These it’s actually kinda interesting and a bit more realistic, but it would change a lot the actual gameplay (and for the record, that doesn’t mean it’s something bad I’m just confirming that it would change the gameplay). Maybe making castles “specials” like you say would make this idea work because with the way that the castles are now will definitively ruin the game.

If they really go for realistic the grenade like explosions should be changed. That’s the only thing I thought of as not suitable. At the top view it looked too much like DoW or any modern warfare game alike. Also if you limit the number of build castles thou should also limit the rock supply of trebuchets. I have been thinking about a supply chain of rocks to the trebuchets in order to reload them. That would be even more realistic and offers new tactics and need to micro routes. So to defend against them you should cut the supply to them, because running into huge armies upon hills isn’t the smartest thing to do anyway.

That would work great, i have been thinking about supply and ammo limit. It would be more realistic and would bring more strategies but i’m affraid to make the game even more complex. For me it’s just fine but for some people and newcomers can be too complex or even not feeling like an AoE game anymore. Imagine adding arrow mechanic aswell.

Nice work on breaking down what’s on these screenshots.

One thing: the archer on the left isn’t a longbowman; or, rather, if he is, it’s wrong. He’s using a shortbow, not a longbow, which would be 5’ or 6’ long. This was actually modelled more or less correctly in AoE II, and yet in AoE III I seem to recall the longbows being quite a big shorter, as in the screenshot here.

If that guy is a longbowman then they need to resize his bow.

Talking about scale that’s pretty accurate and right. I just suggested about a Longbowman to justify the two different types of archers at the same time. After all they’re the Britons and fits perfectly. Dunno really another reason to have both types of unit at the same time. Even in Age III the Britons had Longbowman instead Crossbowman like the other Civilizations have.

Thank you for the great trailer breakdown. With regards to the trebuchet crew, I’m sure this is something that will eventually be added - this is still an early-stage trailer.

Artillery in Age 3 had crew, so I don’t see why they wouldn’t plan on doing this for Age 4. Probably just haven’t gotten around to it yet.

It makes sense from a gameplay perspective to limit castles, but I think there should be a compromise. Not just one like in Age 3, but maybe a max of 3 or 4.

I’m really ok with that amount as long as it has a reasonable limit and won’t be spamless. As we could saw above, there are a lot of buildings variety, so i wonder wich role will the casttles occupie now.

Great analysis, I’m very disappointed on the course the franchise is going, I’m talking as an AOE old school player, this doesn’t look like AOE.

Great analysis, I’m very disappointed on the course the franchise is going, I’m talking as an AOE old school player, this doesn’t look like AOE

Thanks!! Well yes, it does look different. After so many years the leap was going to be pretty big, and to be honest i expected something different than just a mere graphic update but with the same style.
Let’s hope that at least, besides looking different, still feels like AoE

It’s kind of late to post this now maybe, but there are some things that i also got watching the trailers and forgot to put on the table. Better to be late than never they say, so let’s go into it.

We all saw the farms and mills spreading over there, but what about wood resource recolection? here is what i got:

And here some Mongols villagers chopping a tree and collecting it like in the old ways of Age 2 (number 1 in the picture), transporting the wood collected (not an neverding resource collection like in Age III) and also other ones (villagers number 2) slaughtering sheeps for food. 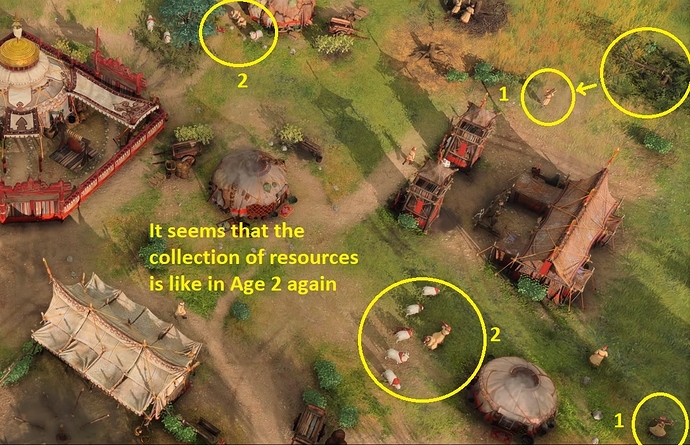 Not much to say here than just it seems that the camera angle for it still the same as the whole saga and almost every RTS. Also the ZOOM IN/OUT looks like to be done with mouse wheel rather than also using the ALT key like in Age III. 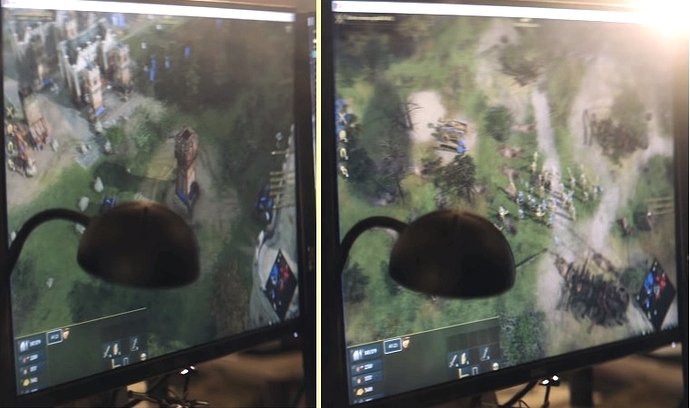 Here just some stuff that most of all have noticed. There are quite often some weapon racks (with bows) over the walls from time to time, wich looks like a nice detail but i wonder if also it will have some function or if it is just mere aesthetics.

Seems than now, besides it still having an icon to detect idle villagers, they also will have a little animation on it for a quick detection (yes, its a Zzz over his head). 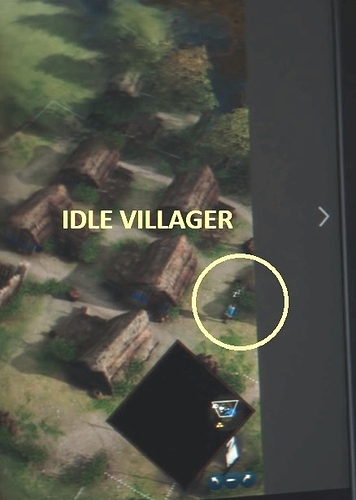 I was wondering about the different type of houses till i’ve noticed that one has chickens next to it. 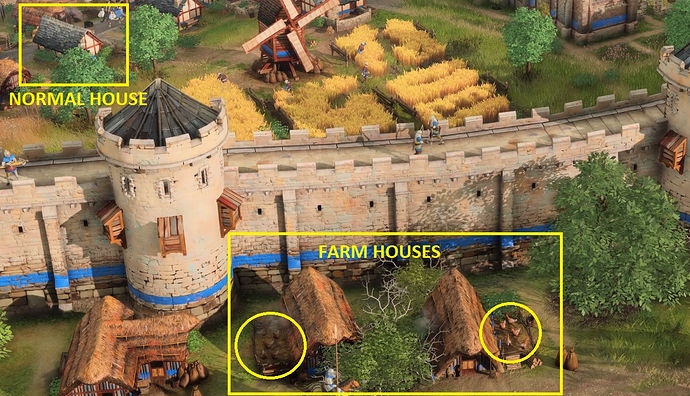 As we can see below there are some things we can recognize, like the Merchant, a Squad leader for what it seems for that cavalry patrol… some ‘‘tents’’ near the gate and then, here is a thing i wonder. In the second cuadrant we can se clearly a soldier pointing with his sword like giving orders. We can all think that is a kind of leader/general kind of something, but one second later he just transforms in a normal Axemen soldier, so what the heck?

One thing I noticed and hasnt been said is that the mongol villagers are milking the sheep, not killing them, if you watch closely.

Seems than now, besides it still having an icon to detect idle villagers, they also will have a little animation on it for a quick detection (yes, its a Zzz over his head).

Zzz’s over his head? Ugh. Good eye to see that. What if they have exclamation points (!) over their head when they’re alerted and ready for combat? Reminds me of Metal Gear Solid

Maybe it will be cute/neat… but I guess I’ll have to see it in-game to know if it will bother me. Seems unnecessary to me, as I’m okay with not being spoon-fed every detail in games. If I mess up and don’t see I have idle villagers for 5 minutes, that’s my fault

One thing I noticed and hasnt been said is that the mongol villagers are milking the sheep, not killing them, if you watch closely.

Well, in this one the sheep looks without skin and kind of dead to me, but the milking thing is not a bad idea! 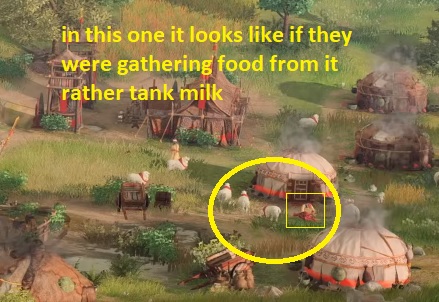 Zzz’s over his head? Ugh. Good eye to see that. What if they have exclamation points (!) over their head when they’re alerted and ready for combat? Reminds me of Metal Gear Solid

I would love it, both ways are cool and pretty easy to recognize!

Can i get your eyes please? I looked at this video like close to 100, and every time you spot something, I look at the video differently.

Thanks for sharing dude, keep it coming

Dude, what the…I thought they were skinning them. I went back, and yeah you’re right. LOL!! I can’t wait for this game now. Mongols play close to how they lived.

EDIT: No they’re slaughtering them. It would be nice if food gathering action happen randomly. Like you milk it or slaughter it. Especially in farmhouse or something.

Haha thanks man! Whenever you want! Hope you like the green colour

It takes some time but i go frame per frame (more or less) and look carefully every single cuadrant of the picture and zoom in if i see something strange at the distance.
It takes time yeah but there are tons of details you can unveil putting attention to it.

No kidding, the stuff you have shown in this thread is amazing. I really appreciate them all, make me see trailer differently while get me more confident in the product. Have a blessed day O`Green Eyed friend!

I can’t wait to put my hands (or eyes