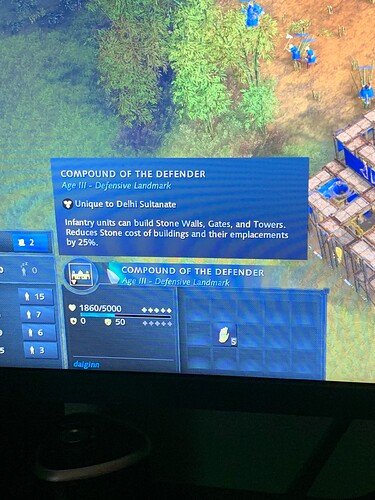 All the defensive” bldngs landmark usually… shoot something or can be garrisoned. This one is not defensive it should be renamed into horrible “military bldng”
Like really a whole building just for what amounts to what should be a simple upgrade from a blacksmith or tc…
Delhi have no defensive landmarks -landmarks that “defend” this should be renamed or fixed to “defend” i vote for actually defend”

It is called “devensive” because its benefit is defensive: The ability to build walls, gates and towers. While I tend to agree that a whole landmark just for that seems a little silly, I do not think the word “defensive” is misused here.

thats all im saying… it seems messed up even if it was intended to be non defensive. Other “military landmarks” have similar military upgrades

Thanks @Daiginn! I’ll take this feedback to the team.