Yeah just checked, the AOE 4 page is completely gone when you look it up on steam
That’s strange because they have had it up since the fan preview

They’ve updated it too early I guess.

Some civs which haven’t been announced seemed to have been shown via the screenshots.

Yes she will be back after the conference I think.

I don’t see it listed in the steam store which is weird since I had it on my wishlist.

There was a bit of a blip.

We need a physical Collector’s Edition, please. My shelves full of games with all big box and collector’s AoE games need their new brother here, too.

lile the unitcounter chart, that will be interesting. And shows its still there. BUT I dislike the fact that it deosnt say anything about DLCs. Maybe there will be a bigger version, or season pass.

ohhh I would LOVE to get a collectores edition

I’ll have the deluxe and even a collector’s edition if it comes out. I love this game already, even if Age of Empires II remains my favorite.

It is a pity that there is no bonus civ e.g. Byzantines in the Deluxe Edition. 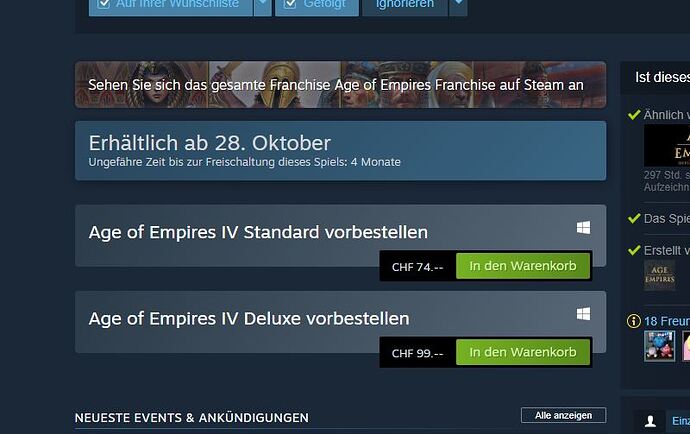 Even the Standard edition is kinda expensive. I don’t remember AOE3 being that expensive at launch.

for Germany its basic release prices, 59,99. 10€ more thanage 3 was back in the day, but thats with all games now. Deluxe edition for 20 more is a BIT bmuch considering only some cosmetic stuff and the info plus soundtrack. till got it though, supporting any RTS coming out. I hope there will be a physical one though, I would rather get that for 20 extra than just virtual stuff 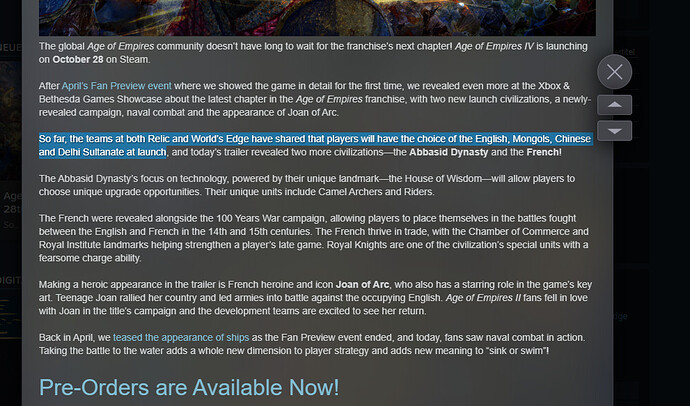 no, dont worry, its just that only 6/8 civs were revealed officially, and they may not write all 8 that will be there

It’s an error, you should not pre-order yet. It happens often happens with Switzerland with game releases and pre-orders…
Sure they will fix it in the next days

I hope so too, because with those prizes, AOE4 seems really expensive.

Any news for retail?