Well if that’s the case, I still have all the Definitive Edition games to play(And possibly AoM: DE around the corner).

Worst case scenario, I’ll keep playing these games while waiting for them to stop drinking and actually give us a proper sequel

a small twaek to the units when toomed in (more polys maybe) would be nice, but not necessary. I dig the Age 4 artstyle, at least zoomed out all looks amazing. If it doesnt zoomed in, I wont do that. seldom did that anyways.
As others wrote, even if they wanted to change it, not enough time.

Its a graphics style that not everyone will like, but so would be realistic style. Age never was realistic. Also, its gameplay thats more important anyways

I don’t understand why some people say that AoE was never realistic.

The artstyle from the first 2 games certainly tried to be, given the restrictions of that time.

Plus they always tried to bring to life battles and campaigns that took place in history.

Of course some civs would have a few inaccuracies regarding some units and techs, but some of it was done to have a better balance in multiplayer.

Of course it wasn’t going to be a perfect simulator because that would be extremely complicated and taxing on hardware, so they did the best they could with what they had and created a solid gameplay with concise rules.

AoM and AoE Online obviously weren’t but the other ones did try to mantain a certain realistic feel.

I agree with you that the graphics dont look top notch but it is way down the list of most important things on a huge sequal like this. Performance, combat, unit pathfinding etc is way more important to get right. If you get that wrong then people will forget about this game and go back to AoE2.

exactly, I would say that animation and sound is more important than actual detailed graphics

no, age 2 was NOT trying to be a realistic display of medieval times. You can see its much more colorful than they were. It was a happy medieval place, and it was supposed to, as one of the main creators did say in several interviews.

And the way buildings look now is exactly the same way. Real-like, but more colorful. Only units are an exception, but these are simply stylized for better separation between them

And they bring battles to life now aswell, in my opinion even better than before.
Of course once the units are a bit polished.

In the image of AOE4 above, some parts have good detail. The parapets of the buildings have a design, the bushes have branches etc.
The blurry texture for the roads gives a feeling that it is covered with dust. The washed out look of the wall is what should be expected from a brick wall that has plaster and uniform paint over it. The armours have a texture and don’t look flat.
When I am viewing it at 4-6 times zoomed out, I can barely notice any of the lack of details. And that is closer to the zoom level the game may be played at.

Which game is picture 2 from?

no, age 2 was NOT trying to be a realistic display of medieval times. You can see its much more colorful than they were.

So age of empires 2 wasn’t realistic because of the brighter colors?
I don’t know what to say to that, honestly.

Also, how would you be able to depict perfect realistic medieval battles with 1999 hardware?

AoE2 leaned on the more realistic art style by having more details on castles and towers, for instance.

If you compare the style of AoE2:DE towers with AoE4 towers AoE2’s are objectively more realistic when it come to textures.

Second picture is from Spellforce 3

After reading the AOE4 forum for few days im starting to think that by being reasonable and using basic logic make you a minority. What a time to be alive.

What game is that in the 2nd pic?

The second pic is from Spellforce 3

My biggest complaint are the arrows, that and the overall cartoonish look to everything. Some of the terrain features are really nice, even how the horses and animals move - but the combat seems sloppy and buildings falling apart look like Jenga towers made of styrofoam.

They could really work on their colours, scale, and distinguish weapons and units more clearly. It doesn’t feel like a top down aoe2 game just done better, which is what most of us want. It almost has a total war or Diablo 3 look to it

I am not a fan of how Spellforce 3 looks and am very glad that AoE4 didn’t go that direction. I mean it works well enough for the sort of game that it is, but for a pure rts, whether played in a laidback way or competitively, it is simply way too messy. A lot of the environment detail also hinges on them being handcrafted maps, while I prefer the more simple natural look of random maps made from simple distinguishable pieces like AoE has always had. 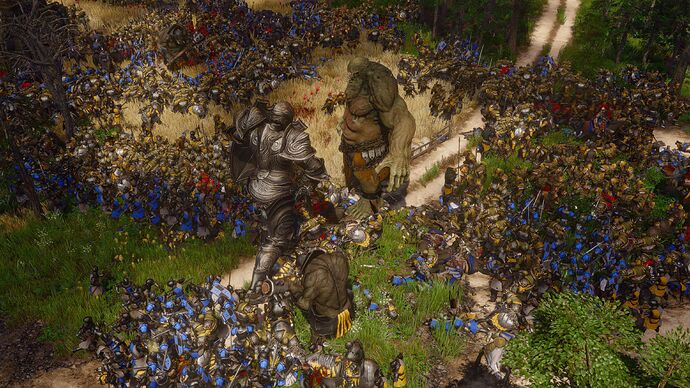 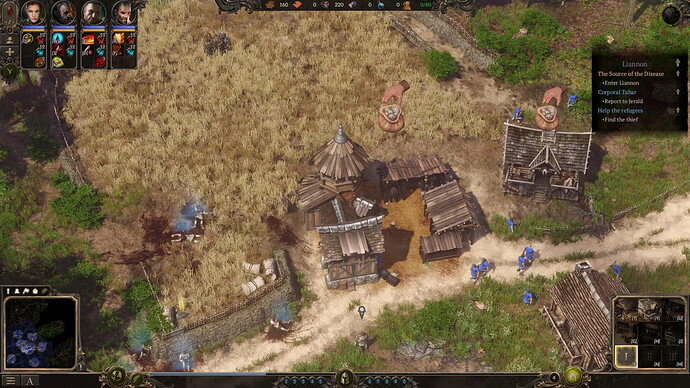 A lot of the environment detail also hinges on them being handcrafted maps, while I prefer the more simple natural look of random maps made from simple distinguishable pieces like AoE has always had.

But you can have random maps with high quality and detailed textures. Those aren’t exclusive to SF3.

I could have used many other games to make the same comparison.

That’s the short of it basically.

But you can have random maps with high quality and detailed textures. Those aren’t exclusive to SF3.

Regarding random maps I was talking about environment detail. In strategy games I prefer macroscopic patterns to be organically made out of a horde of simple singular objects, like a tree - or a bush, rather than bigger clumps of handmade stuff ( like a big rock with seven carefully placed trees and 21 bushes). I am not a fan of big detailed temples with preset cracks in the stairs and whatnot.

I also do not like the extreme lack of contrast that comes from putting overly detailed textures on everything. Feels extremely amateurish to me. It takes no effort at all to just import full texture detail from your artists and then completely ignore the feel of the overall image.

I see. I also prefer that.

But maybe you missed the point of the comparison slightly, because this post is not about the procedurally generated world, it’s just about the textures and graphic quality.

Especially for the units.