Did you forget the Asian civilization in the decision version?

I know that the Medici family was very powerful in the 17th century, and the prototype of the Bone Knights already exists in the game, but it is really unfair. In the decision version, three European civilizations, two Africa, 2 America, what about Asia? In the upcoming great war, there must be the power of other Asians. No other oriental nations except China, India, and Japan ,which are not worth mentioning ??

Yeah I think the devs know that we want another Asian civ. I imagine the reason they put it off is because the Asian civs are complex, require wonders etc.

The popular vote seems to favour Persia. Koreans may be possible at some point too considering they can re-use some Chinese and Japanese assets.

I’d also love to see more Asian civs, but I also think that’s what the devs will add next.
I’ll be equally happy with Persia or a Southeast Asian civ - but extra happy with both

Hopefully they will also add at least one minor civ to represent SE Asian Buddhists, and create the “missing” maps on the Asian continent (Persia, Central Asia, Southern China, Thailand)

Asian Dynasties was to put mildly…badly done, and the asian civs were badly balanced.

African kingdoms did a much better job of implementing foreign allies and using a 4th resource.
Don’t misunderstand I think the FE devs have done well with the disaster that was AD, but they could do better if they’re willing to change things a little more radically.

Basically all that needs to change now is the consulates…make it so that foreign auxilaries are optional yet viable. like getting a falconet from the british consulate as india without the 9 redcoats (why waste half of my precious export of units similar to what I can already train). But if you’re china you might want the british redcoats. Maybe make it possible to using coin/wood/food after an initial purchase using export.

It’s more effective and profitable to work in sprints that provide 1 or 2 civs while also ensuring an steady income and engagement over time. I much rather them do it like this and charge for affordable DLCs than us having to wait 1000 years for a final product with every civ on the wish list.

My only feedback for devs is to create cards that can provide actual value when reworking a civ, unlike for eg. with China that we got like 3 useful cards out of like 10 or 15. I also think that they should listen more to the forums when looking for ideas (mostly this and not necessarily balance). There’s a lot of potential here for improving some Age up options, minor civilizations, outlaws and mercenaries and leveling the playfield (in terms of content consistency) across the board.

The civs themselves also need some changes so that consulate units aren’t so necessary. It’s completely absurd that India has no cannons of their own and must rely on the consulate for this. Same for China, they should also have a Falconet equivalent that they can build on their own.

How many changes? I wouldn’t be so sure that china needs a falconet equivalent, Flamethrowers sort of do the job of falconets for china.

Still I think that consulates are part of the civs and the fact that they’re frustrating or people only half use an ally then dump them.

India could use quite a few changes. China wouldn’t need too much, but adding a Hongyipao to their roster would be nice. China is already really strong so it shouldn’t be as powerful as Falconets and could be grouped in a banner army with less useful units to make it hard to mass. 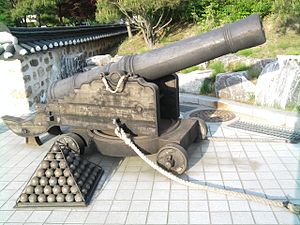 Hongyipao (Chinese: 紅夷炮/紅衣炮; pinyin: hóngyípào; lit. 'red barbarian cannon/red coat cannon'; Vietnamese: hồng di pháo) was the Chinese name for European-style muzzle-loading culverins introduced to China and Korea from the Portuguese colony of Macau and by the Hendrick Hamel expedition to Joseon in the early 17th century. The term "red barbarian cannon" derives from the weapons' supposed Dutch origins, as the Dutch were called "red haired barbarians" in southern China. However, the cannons wer...

Just to clarify, I don’t think consulate is an overall good design either.

Same for China, they should also have a Falconet equivalent that they can build on their own.

I wouldn’t buff flamethrowers too much. They could easily become an overpowered death ball if they are boosted too much.

flamethrower is a tough one, it is hard to balance

Can AoE players stop complaining for a single day that their favorite an/or home region/city/country/language/etnic group/religion/anime character is not receiving enough support?

The world is a big place. New content is meant to fit the game, be interesting and profitable and easily marketable. Making games is hard and expensive and there are 1001 things that need to be taken into consideration when planning your next business move.

No other oriental nations except China, India, and Japan are not worth mentioning ??

Who said that? What are the reasons for asking that question?

The World War I first participated in the world directly or indirectly. Can the Asian Industrial Revolution find a new civilization on the eve of its version? Look at the era of fantasy Mexico and Aztec. Two years ago, I writed an article that suggested to produce Vietnam, it which has a military conflict with China and France. I also saw many different recommendations lists. At the same time, Siam, Myanmar was from century -war until to Britain and France came to Southeast Asia. Earlier. Vietnam, cambodia, and Campadesa have also did war for many years. It should have research value.
(The game map has the southern peninsula, and then there is no Southeast Asian civilization.) I really hope that in the case of balance, innovation and history, we can see the new Asian race in the decision version.

What is Iran doing during that time?

When I sent three lizards in the fortress era, I really didn’t know how to use it. It sounds a little use to send two tigers in the colonial era.

If you don’t understand a little, please ignore it, I have worked hard to adjust the translation

You can just write in your native language. Machine translation on this forum works pretty well.

What is Iran doing during that time?

During that time, Iran was busy being one of the most advanced gunpowder empires on Earth. Quite larger and more advanced than Japan even.

Seriously I love Italy and Age of Empires 3 even more!!! I’m unapologetic: AoE3 is still probably my fav AoE game! But this feels like a gigantic lost opportunity. Maltese? Ok… but come on… Where is PERSIA ! ? ! ? ! ? The Safavid empire of Persia was a FULL-FLEDGED WORLD POWER that almost saved Europe from the Ottomans, with the most beautiful architecture humankind has ever seen! (As a matter of fact, even “Italy” didn’t exist as an entity, much less an empire while AoE3… no comparison with t…