So guys, frankly their bonus to have a siege in feudal is completely meh imo and doesn’t give any benefit especially that siege units are too expensive to use, so imo I think they should remove this bonus completely and give Cumans something else, what do you think?

I think it the 2nd TC bonus should be removed for something else.if you can coordinaate with a buddy or teammates, sending rams + scouts on hill fort is a really fun strategy. And people use them in arena alot more now. Just give them an eco bonus or something is return and it’s still a fun civ to play IMO.

So in your opinion it is only tgs strat, but I am talking from 1v1 perspective because tgs are not a reference at all. This bonus to have siege in feudal is completely useless

tgs are not a reference

If that is the case, you should be more worried about Cuman Mercenaries, or Paper Money.

I think if the bonus isnt op theres no reason to remove it, other weak bonuses exist: goth hunt carry capacity, chinese demo ship hp, saracen transport carry capacity, teuton monk healing range and free murder holes, inca starting lama, etc. etc. i wouldnt advocate removing any of these either. Feudal rams are usually not very good, but they have their uses occasionally and even if its just getting your rams out sooner while going up to castle age. It makes for an interesting bonus and if the civ is too weak as a whole, you can add another bonus without having to replace an old one.

you should be more worried about Cuman Mercenaries, or Paper Money.

Actually I am, both of these UTs are useless

Actually I am, both of these UTs are useless

theyre good in team games tho

But all the bonuses that you said are way much better than Cumans bonus, I was even against their 2nd TC, I really wonder what was the devs thinking about when they introduced these bonuses?!

Until it became completely useless 11

Lol useless, ask any arena player and they will tell you that the second TC in Feudal is really useful.

In general the Cumans now are the lowest winrate in +1650 ELO with 39% winrate, this civ is dead

Meanwhile on top of the very same chart 11: 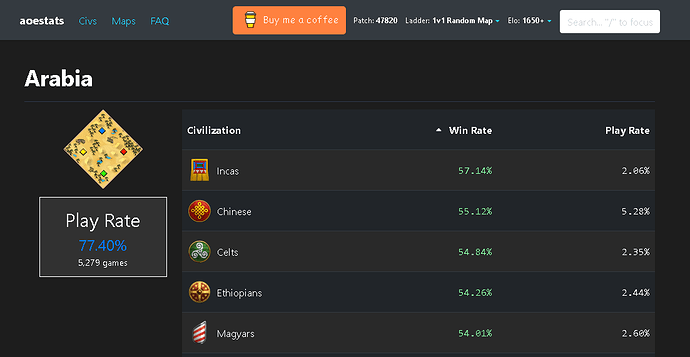 yes I had to 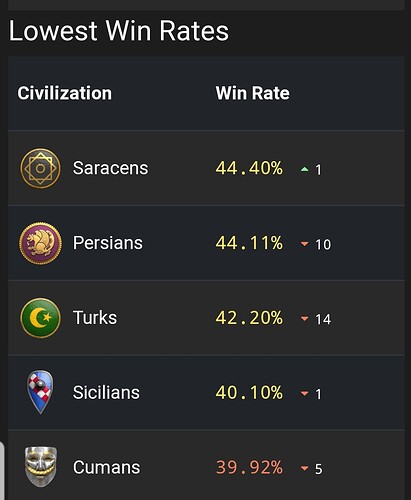 Always 1v1 is the reference not team games, team games already meh and broken at everything. Even in TGs Cumans have 48% in +1650 ELO, but they really suck on 1v1 with 39% winrate, they need help for sure.

Always 1v1 is the reference not team games, team games already meh and broken at everything

How about a bonus to make rams cheaper similar to a suggestion i made for Burgundians.
Rams cost 50% cheaper in feudal 25% castle and 15% in imp. This makes rams doable in feudal but the cost goes up to not let them be ridiculous.
From 160/75 to 80/37 feudal and 120/57 in castle 136/ 64 imp. It allows you to afford the rams without much delay. An extended feudal attack with scout or spears would work well and at the price your realisticly only getting one or two before your opponent ages up. Great defense option against a tower or a archer rush as well

What if they didn’t need to have a blacksmith to be able to build the siege workshop? Would that be OP?