With the announcement of the new Mexican DLC, a trailer and a few screenshots were released to tease the civ, and these show interesting details and useful info. I’ll try to detail everything I’ve seen here:

In the screenshot for the jungle fight, we can see that mexicans have access to aztec barracks, being them the predecessors of the new nation. Probably tied to some revolution mechanic? 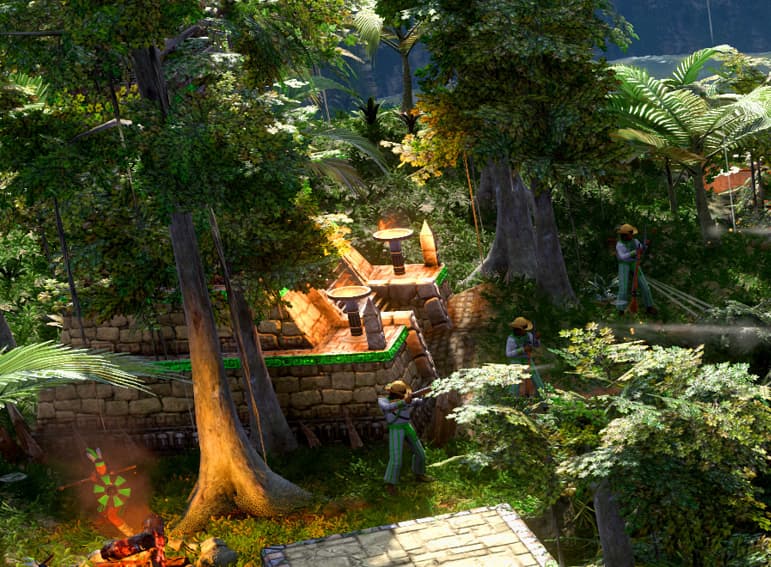 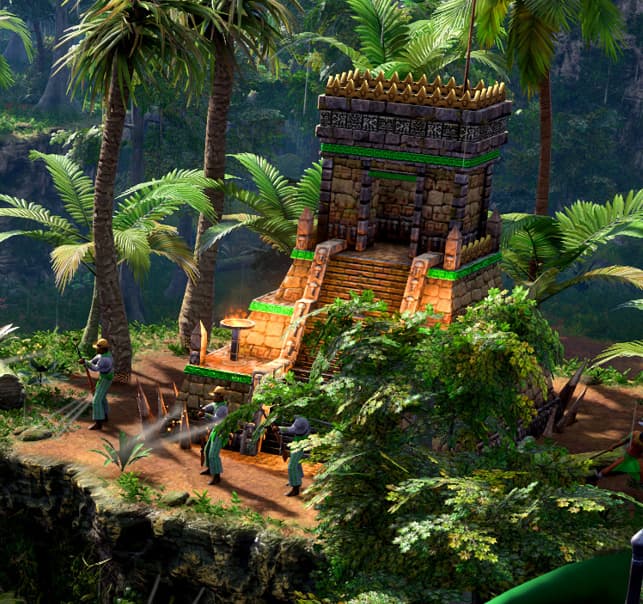 Also, we can see they have native units, specifically maya, so it’s fair to say they are going to receive support from native minors:

They will also receive light cannons from the natives, along with the regular european artillery:
Light cannon 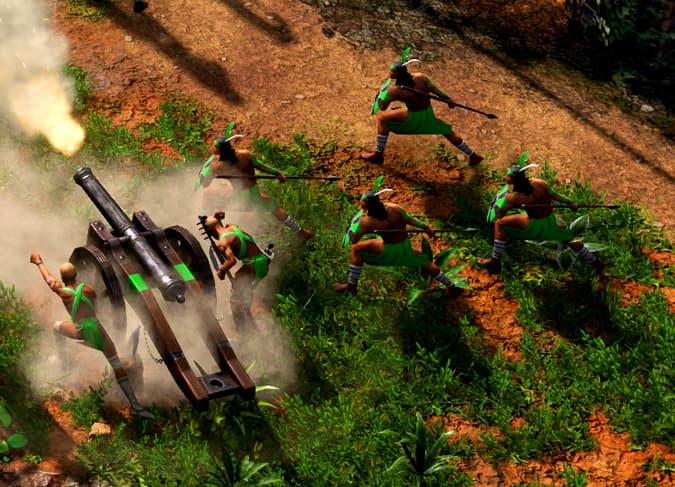 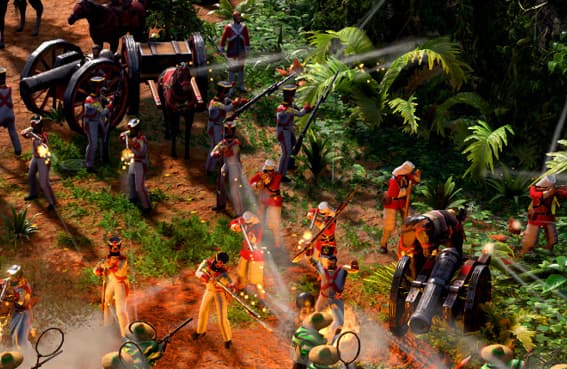 We can also see some upgraded models, having Soldado and Salteador units:
These looks like Soldado’s guard upgrade model 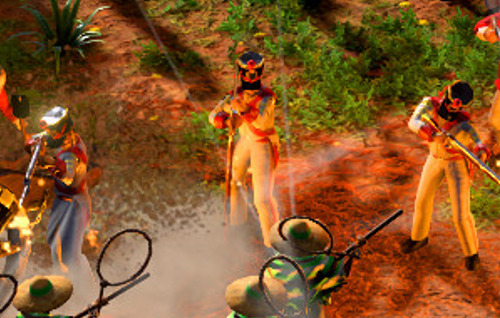 And these seem to be the veteran and guard models for the Salteador:
Veteran 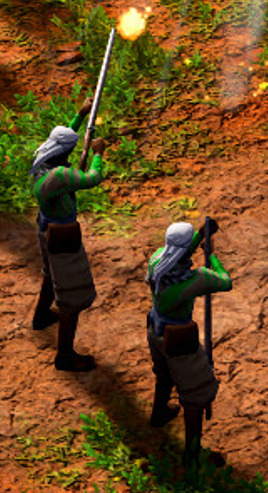 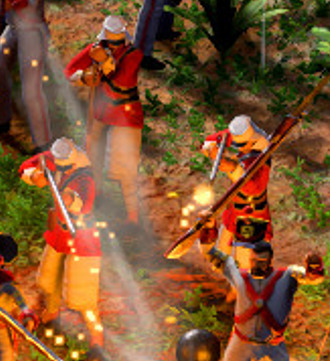 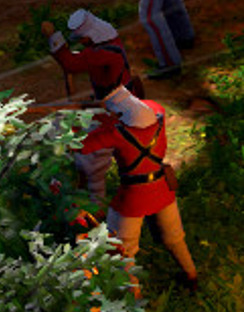 We can also see these guys, which I thought were Soldado’s standard or alternative model, as theys eem to have muskets, but now I think they must be a unique unit from a rev: 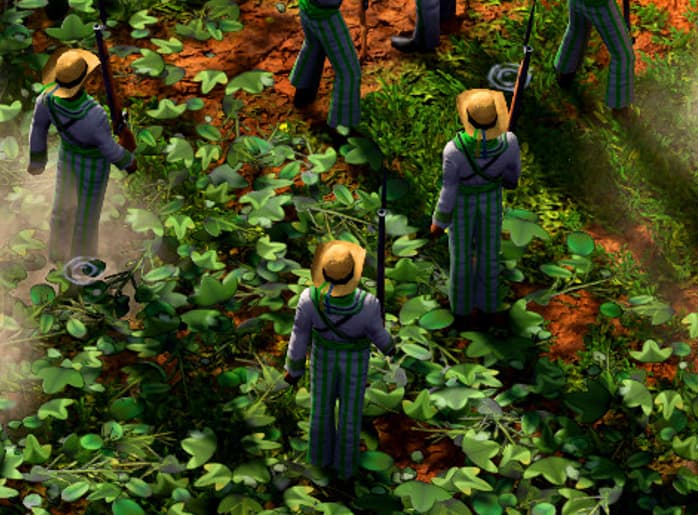 Here some guard or veteran Chinacos: 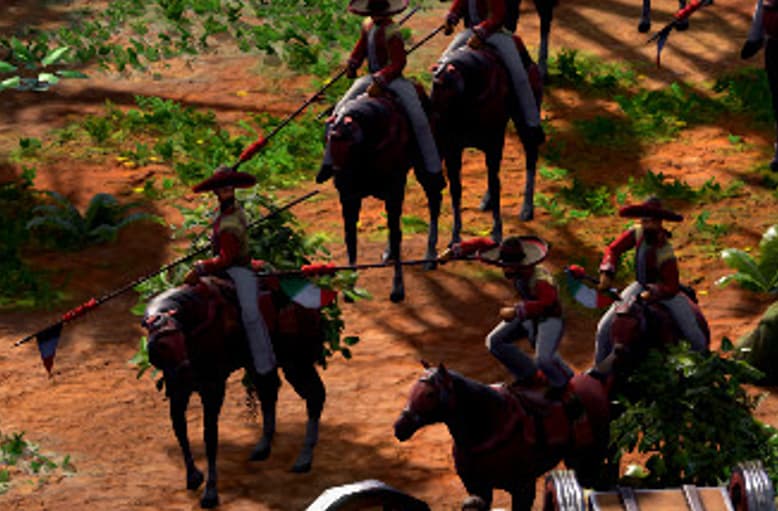 And this one model, which could be a general, but it seems to have a head piece resembling native attire?:

In the Cathedral screenshot, we can see the building is rather big compared to units and some buildings: 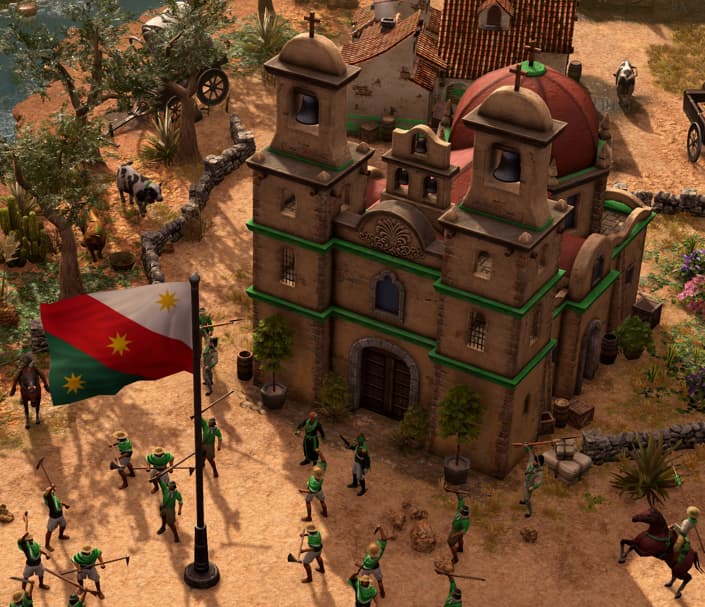 We can also see the two explorers, Padre and General: 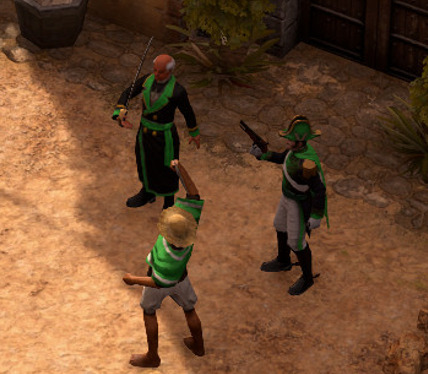 As we can see, the Padre unit will be able to attack with a sword and a pistol, as we’ll see later.

There is also this moel of a revolutionary on horseback, which is not the unique outlaw Cautrero, but a new unit on which we don’t have any info (probably a rev unit): 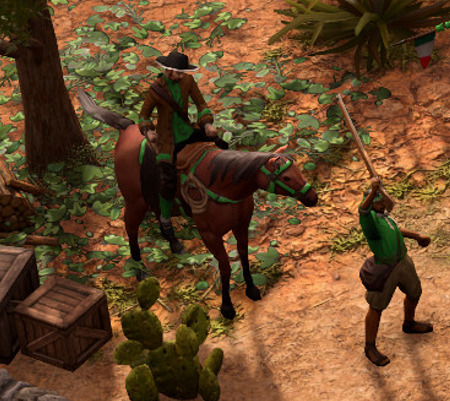 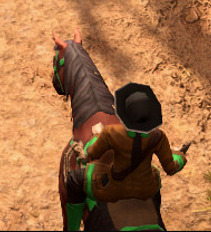 Also, we see this little building, that initially I thought was a chapel, as it has a missionary there, but seeing as it has no player colour, ir may be just decoration: 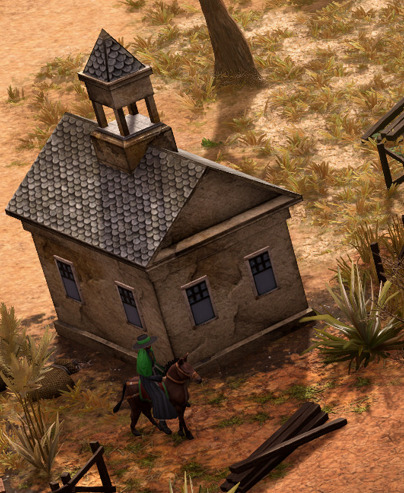 In the port city screenshot, we can see Mexicans will use galleons and caravels, so no new unique ships this time: 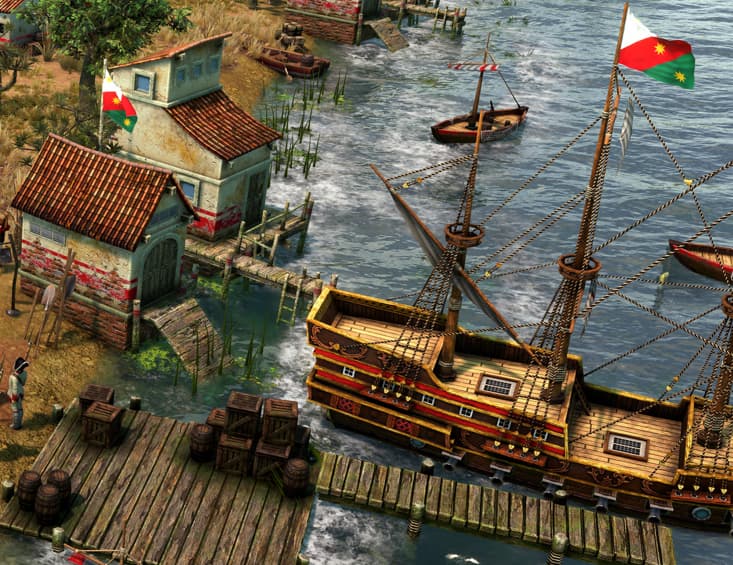 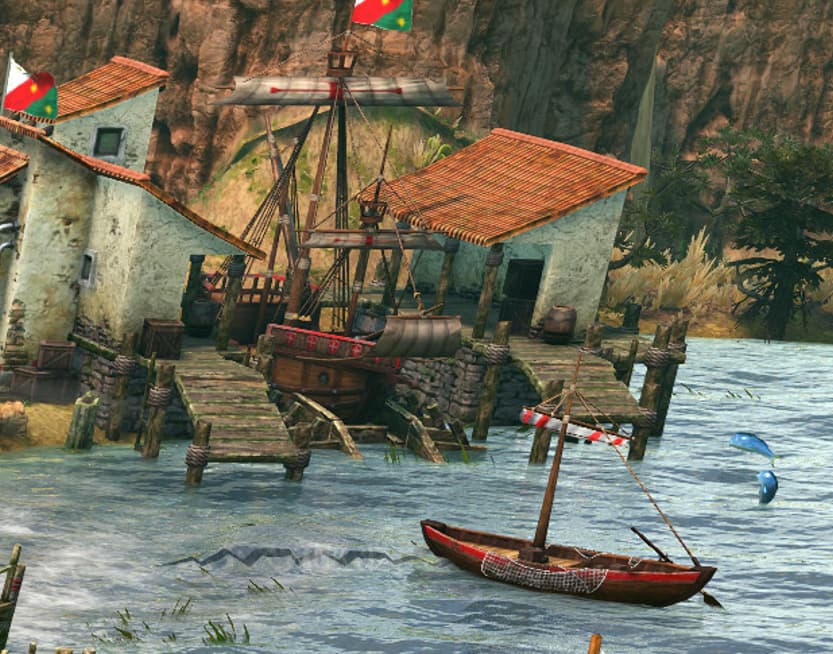 In the route fight screenshot, the only thing that stands out is this building near the trade post:

Which has also appeared in the campaigns, so it may be just decoration, but we already have precedent of campaign assets that find their way into new maps and mechanics.

In the screenshot for the fight against the spanish fort, we can see more european artillery being used by mexicans: 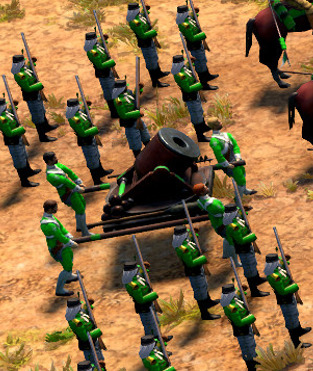 Here is Padre using a pistol:

Those are the interesting bits I found In the screenshots, if you find anything else, post it here so we can unravel what this civ brings before they come out in a week. In the next post I’ll post what I find in the trailer.

By appearing the livestock, it will also have a relevant role for Mexicans. It seems that the farms will generate cows for free and the process can accelerate if there are workers. (It is what I understood in the trailer). 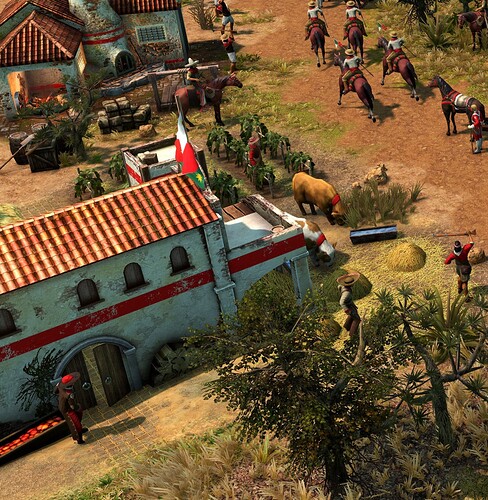 That is why I think that for other civilizations it would be fair that livestock were more useful.

Mexico, another civilization that intends to make livestock farming viable. [Captura de pantalla (417)] [Age of Empires III: DE - Mexico Civilization Overview] (They talk about it from minute 1:39) By appearing this building (farm) will generate free cows and its process will be accelerated if there are villagers working in it. Imagine that you build farms and configure it to generate cows automatically. By the time the hunt is over, it is inaccessible or it is very risky to … 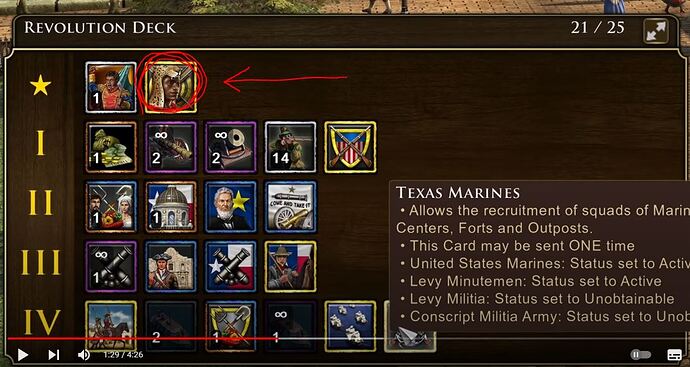 azzi1076×573 112 KB
you can see there is an age up card… but this might change, since i cant find those two cards on the selection for commerce age 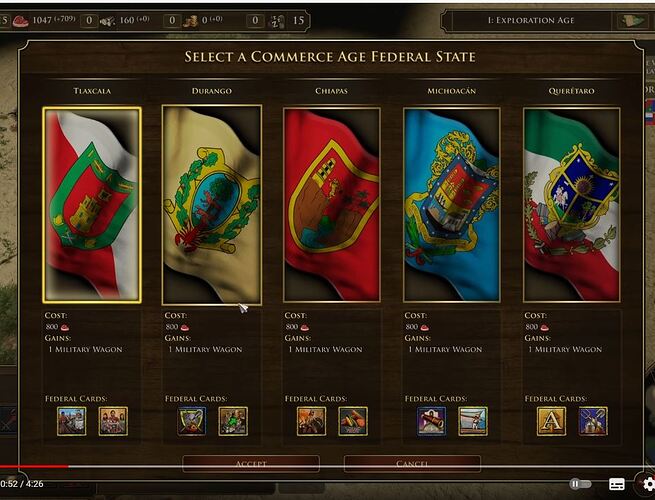 kirche1104×389 75 KB
looking at the church upgrades i wonder, if they get ‘town watch’ and ‘gas lighting’
also you can see the XP trickle is greater and HP are massive

Here is the Hacienda. It appears to gather at the same rate as one villager without any gatherers.

With the Yucatan revolt you can get Yucateco Insurgentes which I assume is royal guard but it is unclear if you can upgrade them to royal guard without the revolt.
EntombedCurve02 November 23, 2021, 6:16pm #5

In the trailer, we can see the Mexico home city retains the Aztec home city temple, a nice little detail: 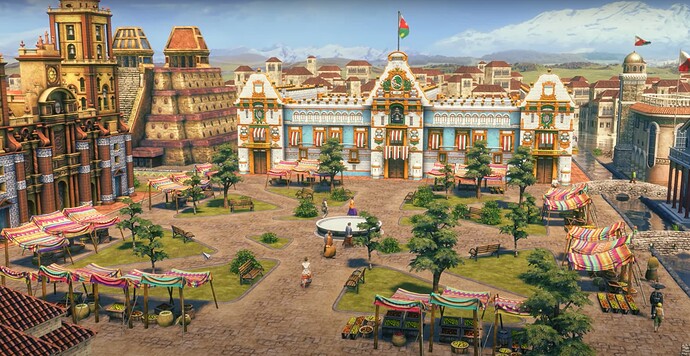 Politicians for the fortress age: 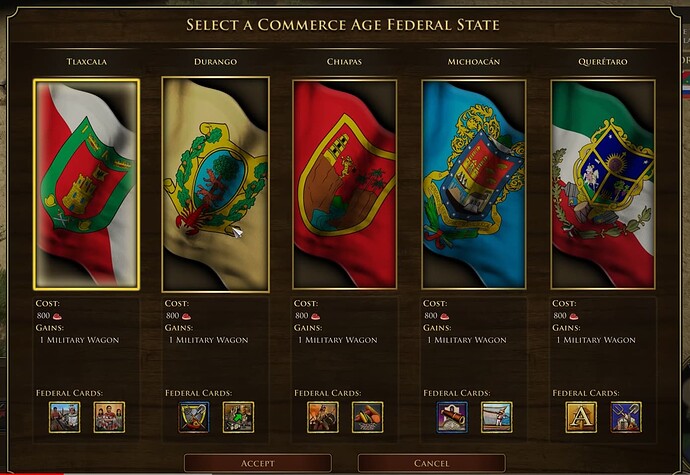 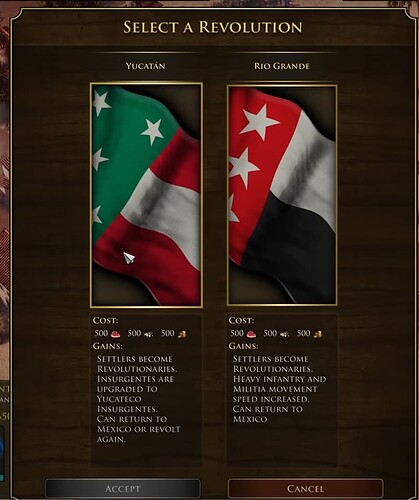 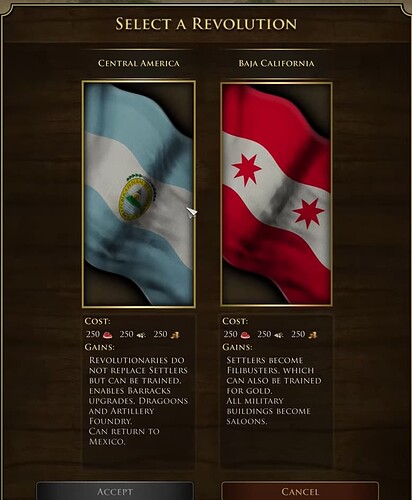 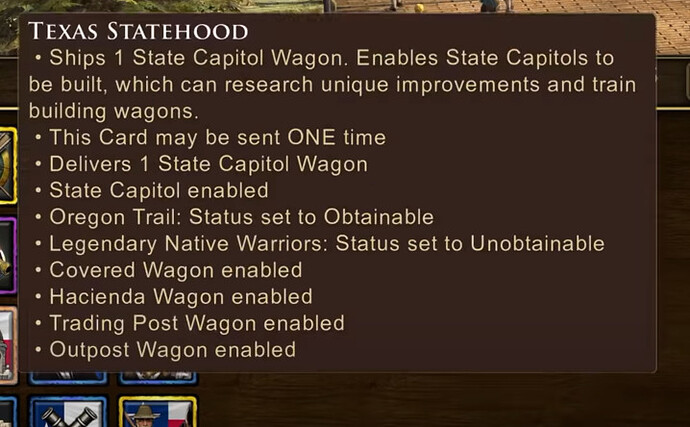 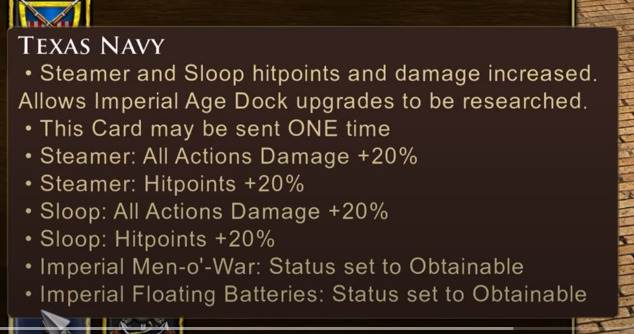 Visit of the seven houses:

hm i have to correct my statement about the age ups. Texas cant be a commerce age revolution. They get an factory in ‘age1’ so it would be broken if mexicans would go commerce age, revolt and then send the factory… therefore the aztec card hasnt to be a commerce age up option. maybe the revolution deck only shows the age up cards, you havent send already (or the devs started in age 3 for there video and therefore there are only 2 age up cards shown)

Looks like the Mexicans get Steamers and Sloops, makes sense considering they are in the same civ type as USA. Hopefully they get Ironclads too.

This one looks very much to me like a French uniform in later 19th century. I guess it’s plausible because French uniform and training was imitated by many counties at that time.

The farms will have 15 workers, so only 6-7 of these buildings will be needed. 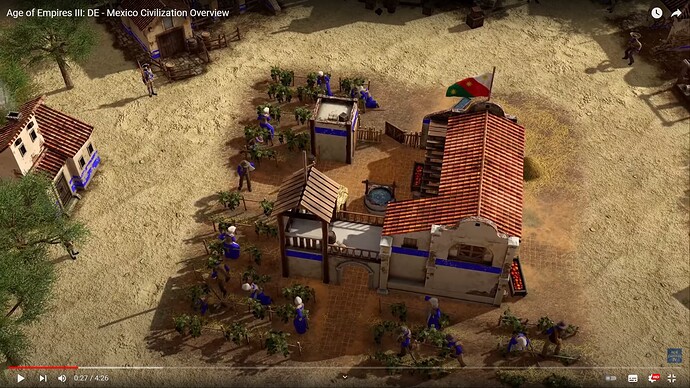 Edited: capacity of 20 workers per farm, with a limit of 6 farms.

Oddly though Beja California does not have the “can return to Mexico” description. Either it is the case, or it’s an oversight.

BTW I think the revolution bonuses should replace some regular Mexican unit upgrade techs/cards. If they co-exist (ie have the same amount of techs/cards for regular unit upgrades as other civs along with the reversible revolution), they might stack to absurdity.

Also I believe hacienda has a build limit, which could probably change through ages. All buildings so far with passive resource trickles have a limit (including the Inca estate with the big button). Not to mention having 10+ buildings in late game spawning settlers is quite crazy

according to vividly and Daniel it can have 20 gatherers, limited to 6 buildings.