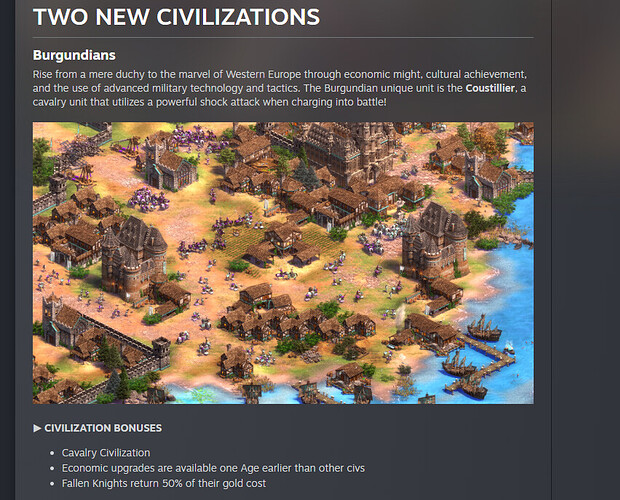 It just pop up in my steam an announcement of a new aoe2de DLC, the lords of the west. It seems that there will be 2 new civs and 3 new campaigns. Is this for serious? I mean I was hoping for new campaigns, but new civs too?

This DLC is already discussed in this thread.

Seems to me like a pretty trash DLC too…

@WoodsierCorn696 Thanks for redirecting the thread. Can always count on you being ontop of the forums here lol

These sound so very imbalanced. Hope they for once playtest before release.

Scutage: Upon researching, each team member receives a one-time payment of 15 gold for each military unit that they own

I’ve said it before. New civs are the selling point of DLCs. If there are any DLCs for this game, which actually happenened and I saw it before with the Palermo DLC name which was hinting at Sicilians, they’ll add new civs into it.

If buying Making and buying DLC’s is the way to earn enough money to keep the Patches and the support coming. I’m all for it. although I don’t think that we need more Civs. It’s already really hard to balance the Civs, while only a few are viable.
So I hope the Civ’s bring nice new aditions to the game and don’t just add more Civs nobody wants to play

Got this game for 15 Euros. 35 civs. 2 new civs come in = 10 euros :D. I like the game, and understand that the developers have their overheads, but surely there are better ways at making money off continued support without stirring up resentment in the community.

Suggestion? 2€ per civ. Separate transactions. I think most people could live with that, disregarding the balance talks. It’s not that 10 euros is too much of an ask rather the point being these kinds of financial practices are not very praiseworthy to say the least, at least in my own personal opinion.

I’m pretty confident there’s enough design space for interesting civs. I hope, if they add more, that they’ll be outside from Europe.

Sicilians are quite a unexpected pick even for a European civ. They’re probably representing Normans partially too I suppose.

I would have liked new civs with indian architecture set.

Maybe for the next dlc…

Really hope that too that India will get some love later on.

I’m not in favour of new civs only being available to people who buy the DLC, as to me, the game will no longer be a true competitive game at that point. A true competitive game must have a level playing field in ranked play, and in the case of AoE II DE, that means making all civs available to all players. I thought the developers understood this, given that only cosmetic items have been locked behind the monthly challenges. Charging extra for anything that doesn’t affect the outcome of ranked play is fine, but the base game should include everything needed for a level playing field.

Really hate to sound like this but I’m not too hyped about this DLC. I mean sure they’ve been pumping out free content for a while now and a DLC was long time due but the idea of new civs seem a bit odd to me as the existing civs already present a huge balancing mess. Also Burgundians and Sicilians? Poor choice of civs I’ll say, especially when we’ve already encountered Burgundians in the Joan of Arc campaign as French and Sicilians are obviously a part of Italians unless we are talking about aboriginal Sicilians before their integration into Italian culture but that would not fit into the timeline of AOE2.

I’d have rather wanted to see something completely different but there is also something else that bothers me is they are actually splitting civs into new civs and if this trend continues we can get into a mess that not even the devs can fix. I mean whats next? Split Goths into Ostrogoth and Visigoths? English into Normans and Saxons? Chinese into Han and Manchu and so on and so forth.

I think they should stop adding European civs and focus on India, Africa and America instead. Europe is pretty much full already.

It’s not P2W if it’s balanced over time. Don’t forget that selling new civs will benefit the MP crowd long-term with financial support and you can’t deny that new civs are the selling point of DLCs for quite a lot of people, that’s why we got Sicilians and Burgundians.

We will get all of them, just be patient.

True, but there are plenty of other ways for the game to make money. Although revenue drives a business, it should not be a barrier to gameplay. Think of the userbase, how do you cultivate growth? How do you increase adoption? by increasingly making it difficult for adoption and playability the game will lose its potential.

The game already has 35 civs, 2 more won’t change that and if they decide to add even more later on that won’t either.

AOE2 had tons of civs in Vanilla already.

Exactly what everyone was asking for: new European civs. Super awesome that they’ve decided to invest resources there instead of into stupid things like “fixing multiplayer” or “connectivity issues” that nobody cares about. No, they’ve listened to the community who have OVERWHELMINGLY proclaimed that “hey, 35 civs aren’t enough and Franks and Italians should be divided up more and some broken, OP civ bonuses are also missing.”