Do you guys think developers is giving their best?

Or are they looking for Definitive Edition for Age of Empires 4 in the future?

at this point i dont know

yep, I think they are. I think they really are. They’re really trying hard to pick the best elements of AoE franchise into AoE4 but also add new and unique things into it at the same time. (Assymetric gameplay from AoM, the Age up system from AoE, the resource drop off mechanic from AoE, some of the units will probably feel familiar from AoE2 because its set in the same time frame, but then some stuff like the way the Chinese have to build up their base seems unique to AoE4 etc.) To me it seems that they have thought long and hard on the design stage before jumping to production with AoE4. I also think we’re going to get a very polished and mostly bug free game.

I honestly hope they bring back full on expansions and not dlcs.

Well they seem to have addressing many community concerns like when arrows were too big and when people said having only one Indian civ wasn’t good.

I’m convinced that the current developers are giving their best. AoE IV will be a great game for sure as long as there is enough money to maintain it in the next months/years after the release.

I think developers do what they’re paid for with a specific deadline or time allocated for a task. I personally think that they actually lack of programmers, and that majority of game companies have difficulties to hire/keep programmers. Programming is not an exact science in terms of investments/results when it comes to developing/maintaining a game.

I just had a look at Relic official website inadvertently : 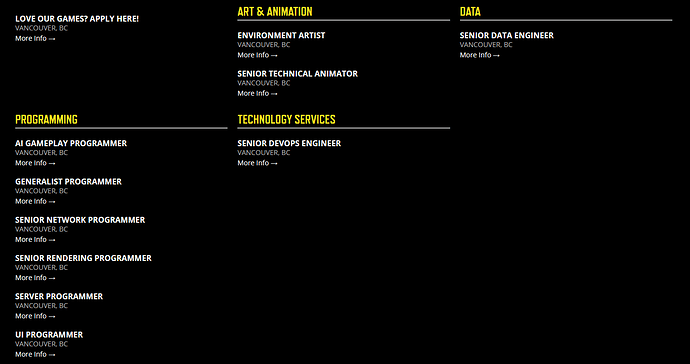 By the way for “developers” of the AoE series : Good luck

I met many members of Relic’s team in Vancouver and wince at this post. These people are each incredibly dedicated and hardworking and have dedicated their careers to making games. To suggest that they are not putting in effort is incredibly misguided and disappointing to read.

No matter what AoE4 looks like, it was never going to live up to the expectations of every AoE community, let alone every AoE player. So concerns about the game are inevitable. But let’s keep the complaints within the lines on the field and not go after the people making the game. That’s inflammatory garbage.

I honestly-deep-down feel like developers are giving their best- Yes. Relic is under immense pressure, if you really put yourselves in their shoes. They have a one of the best IP on hand and they have power to ruin it. But if they ruin it then they will have another “bad” game in their portfolio. They have yet to give a stellar hit since 2009 (dow 2). All their games after that year didn’t receive a massive reception, so this is their moment. I don’t know what kind of underhand dealing went between MS and SEGA but if Relic fails so does their future if I be honest. Likewise I think World’s Edge is also in somewhat pressure because they got to justify their studio’s creation. It is a studio solely dedicated to maintain Age series, and they are the ones f-ing things up then they lose the whole point.

If I can be honest again, it is better to delay the game and polish the game some more though. It does have some janky areas, like unit animations, physics systems, detail to name a few. They can take an extra year or so to work on it some more. A bad launch will make the game dead on arrival.

I totally agree with you and i explained this in my previous thread. The most talented people Who worked on DOW and Company of Heroes left studios Years ago so this Is the main reason for the Big failure od Dow3: they Lost the main visione for those games.
Actually, Relic have good developers but what we’re seeing from these screenshots and videos (the art Style, Low details, Building sizes, animations etc) it’s not good.

There’s a lot of pressure on Relic and they were not expecting this reactions from people: in some video interviews they seem nervous when they have to answer to Graphic questions.

I suggested(After x019 trailer) to developers (Who never answered to people on this community) to make monthly video-blogs to share their progress on game in a smilar way on what have been done with ANNO 1800: developers starter to make video updates and they’re receiving feedbacks from community.

ANNO 1800 Is the best ANNO, very well acclaimed by fans and media, because developer have been Heard what fans were Saying.

If Relic and World’Edge would had made a similar thing we would probably not have not poor units, and other issues which have been discussed every day on every communities around the web.

I Don’t know how developers Will fix all things but i Hope they’ll find a way.
Relic Will not have a second chance After Dawn of War 3.

Hope for the best.

Did developers did their best in DOW3? may be some of them and other don’t same applies to age IV… I see laziness in this game.

I pre ordered to support the series but dont expect much from Relic tbh.

I bring to your attention, DoW 3 was not a bad game, it was not completed due to heito from the community of true Warhammer fans and incredibly pretentious tabletop players who were not asked at all, the game was flooded in ■■■■, not allowing the developers to fix the shortcomings, and apparently you are not you know that Relik is not working alone on AoE 4, while all this is under the roof of Microsoft. But of course, you can just say that the developers are lazy and crooked, why figure out the little things and the reasons for the failure of the game.

Yes. yes they are. Devs almost always do. Its the higherups which may or may not negatively influence games.
The game looks gogreous and fun to play. According to the devs, it also IS really fun to play. You see their excitement on stage, and you see the well thoughtout game elements, although not everyone likes them in the community. Thats impossible to change though there will always be some complaining.

Also the council idea shows they didt want to anger too many players.

It would be better if beta started soon, but thats not on the devs.

basically the same nowadays, so it will be called a DLC anyways.

progrmmers are expensive, but they ARE actually easy to find. If you have the money

What poor argument… DOW 3 was not a bad game? then why are there more people playing 20 year old dow1 or dow3? why there are only 10 people playing dow3 right now? of course it is a bad game…

Yes DoW 3 could be a good game. Why do people play the first parts? Obviously you don’t know the specifics of the Warhammer community, these are more board game nerds, and they despise all parts of the DOW series as much as those who play it. Why did people stay in the old parts? Perhaps because this is duckling syndrome, or because DOW 3 was canceled early in service and it is not playable on the network and has no balance.

people play the first parts? Obviously you don’t know the specifics of the Warhammer community, these are more board game nerds, and they despise all parts of the DOW series as much as those who play it. Why did people stay in the ol

It was canceled for a good reason don’t you think? because it was a TOTAL FAILURE lol, they even dare to put a moba mode in an RTS game, now they are creating a age of empires Disney mode.