Elo is going to be added in lobbies, but not the way it should be done

Please read this too : Developers, a CALL TO ACTION. Mutliplayer needs FIXING!

“ELO stats will display in casual lobbies when hovering over player names.”

Is something they’re working on according to the last patch.
And I thanks them for that, they actually do listen the community and patches are great for now.

But please, dont just show the QuickSearch elo in normal lobbis. As everybody ask for weeks now, we want a rank system in the lobby, as it was in TAD and in Vanilla.

If there is no rank system in normal lobbies, everybody will just be blocked at their elo rank. And new players will never be able to get any elo as QS will not be played anymore.

Not everyone wants a ranked lobby.

U really enjoy a game with a 4 conscript, a colonel and a sergent ?

I don’t want ranked lobbies, but showing the ratings there is a good change for sure.

Just kick them if they don’t have a rank.

We need rank so people can play at their lvl

Of course, without rank people will just be kicked

That’s why we literally need it.

People join lobby by their rank and play, as it always was.

And sit in lobby simulator endlessly because people don’t want to play against a pre made team of friends in voice chat and many other problems… there are issues with any system. People should just go play ranked and everything will work out in the near future (assuming bugs are worked out).

Just for everyone to see, this is how it was before : 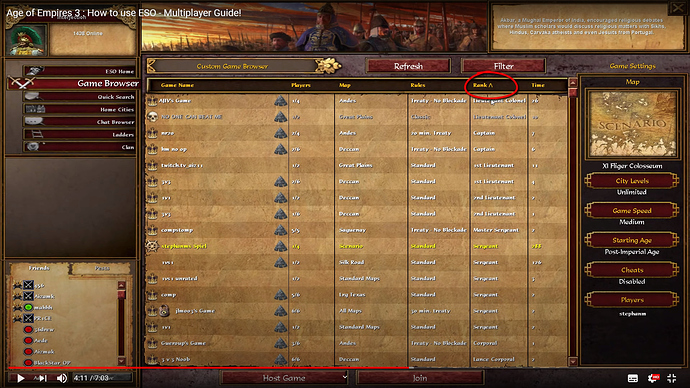 Ah, well you speak it so it must be. I speak it and it never happened. Two people couldn’t possibly have two different experiences.

Like all the PC changes, just learn to accept it.

I miss the old ELO. It was so effective and simple.

Let’s be honest, I’m able to agree the QuickSearch system can work with 10 000 players at one moment. And as said, i already need 10 minutes sometimes.

What do u think will happen to a Quicksearch system in 1 year, a morning, with 1000 players only ? U will wait 1 hour ? lol

Thousands of people are playing AOE3 for 15 years, and it’s incredible. I really think the old ESO is one of the main reason, that possibility to play with people around ur lvl at any time was perfect.

Whenever I try to play team on ESO I sit in lobby for several minutes because I always play with friends. I hate teaming with a random. It’s also hard to find a game with only 1000 players online. Sometimes I can’t even find a 1v1 at my level.

These are anecdotes, however, much like your 4000 hours of anecdotes. If that’s all you’re basing this on, there’s no point in continuing.

Bugs are a bigger issue than ranked lobbies for 3v3 dekkan games.

Both are big issues.
Bugs for near future, rank system for long future.

I’m from vanilla so i don’t play dekkan, for us it’s gp

If u played tad, please sir, can u tell me how is the QuickSearch system working on TAD ? Cause it’s the exast same QS as DE.

In both Vanilla and TAD, there’s both Quicksearch AND ranked lobbies.
I’d even say the Quicksearch system is better in legacy cause u could choose a reach of lvl to play.

But as u know, there is nobody that’s using it, must have been years since last game was found in QS.
So yeah, when they can choose, people use rank lobbies. Cause it’s better in every way :

In the actually QS system, i’ve played vs really good players and next game vs total noobs… i would avoid wasting my time with ranked lobbies.

In the actually QS system, i’ve played vs really good players and next game vs total noobs… i would avoid wasting my time with ranked lobbies.

It’s a brand new ranking system with experienced players and complete noobs starting at the same elo. Over time, player ranks should stabilize and it should be sorted so people are more fairly matched.

I don’t want ranked lobbies, but showing the ratings there is a good change for sure.

Agreed on this. Quicksearch being the main way of 1v1 is so fun and versatile.

I don’t like ranked lobbies, but I agree there are lots of work to improve the quicksearch system.

I’ll just leave my opinion here, if the devs decide to add ranked to casual lobbies as some players are requesting, please leave 1v1 supremacy out of this, Rated 1v1 must remain exclusive to matchmaking!

The only way a good ranking exists is if we only have qs, the day you allow hosted ranked 1v1 games, you will start to see those guys that only play amazonia vs beginners (noobbash), or play only oto in great plains and kick everyone who picks a civ he dislikes, or just point trade for a spot high in the ranking… and the whole elo thing becomes meaningless.

I believe the majority don’t want a ranked lobby. If I remember correctly, the people in the old AoE3 lobby are forced to record the elo after each game, right?

There are very similar systems in AoE1DE and Rise of Nations, but the difference is you can set if this game is ranked or unranked freely. The result is, most of the games are unranked.

AoE2DE doesn’t have a ranked lobby either. There were many people asking for showing the player’s state in the lobby so they can have fair games. The devs listened and patched the lobby so people can see the state of each other. But the result is, many people just create smurf accounts by family sharing to avoid their true skill levels being known by the strangers. And there are many “noob”, "ultra noob, “semi noob”, “good noob” rooms with smurfs. It is almost impossible to have a fair game.

People actually don’t want a ranked lobby. If some casual player feels stressed in QS, he will feel stressed in the ranked lobby too. If you allow people set if the room is ranked or unranked, most people will just go unranked. Still, you can’t have fair games in the lobby no matter what.