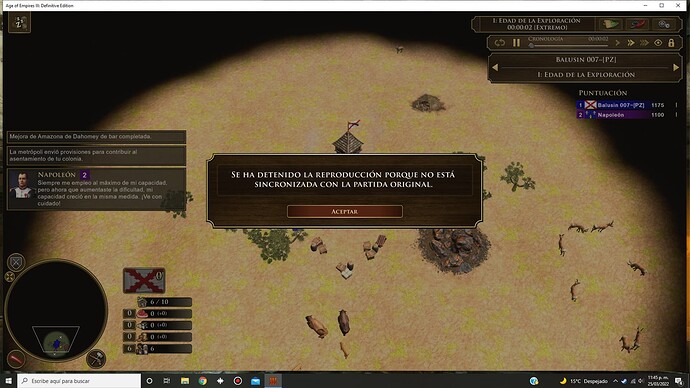 Hi!
Can someone help me with this problem?
When I want to see my recorded games, this message appear
“Playback has stopped because it is out of sync with the original game.”
Which is the reason?

Hi, this typically means that the recorded game file is from another version of the game (like from an earlier patch), therefore it unfortunately cannot be replayed anymore.

As Eaglemut said, most likely a version conflict! There is not much we can do about that unfortunately. Apologies for the inconvenience caused.

Old patches recordings aren’t fully compatiblle with newer version of the game, but there is an app in development from a dev (fan) that allows you to get some good infos from it. It doesn’t make you spectate but only gives plain data info.

[image] Replay Manager Developer: VladTheJunior Current version: 0.0.4 Download Join to my Discord server to: Stay up to date with the latest things. Suggest your ideas, discuss and improve them. Report errors and bugs. Сhat with me on various topics. About The Project Replay Manager is an update to Records Parser tool from ESO Tracker developed in 2019 for Legacy version of Age of Empires 3. It shows most of the useful information needed to analyze recorded game. If you have informati…

Thank you all for your answers guys, now I understand why this happens, unfortunately I will have to re-record my games. Greetings!!