The game censores everything I write. Even harmless words like “ez” or “wtf” that a part of the multiplayer since the beginning of online gaming.
Is there a way to disable the censor?
If not, I would like to report this as a bug. Please fix this. 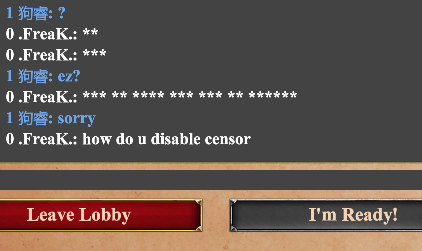 This is the ■■■■■■■ stupidest ■■■■ i have ever seen, harmless acronyms used in age for 20 years like “bbc” are being censored. Even mild variations of possible curse words are censored, ■■■■ like cok, coc, or c()ck.

No one has said c()ck to get past curse word filters since the early 2000s, who’s great idea was it to use some outdated database to blanket ban all the words added to it for the past 20 years?

You are treating our community like children and it’s insulting, this is the one thing that will make me personally leave DE for good if it isn’t removed entirely.

Especially when most people who play aoe2de are ages 20-40
I wish it was 1st April joke, would be really funny. But looking at the calendar and see its not april, makes me sad.

For the love of god let people swear. A lot of us play this game after a hard day of work, there’s going to be banter and swear words (imagine a pub without swearing).

Stop treating your customers like children, we can handle ourselves fine, thank you very much.

EDIT: I’m not opposed to something like a parental filter in the options though. That’s just more features. As long as we can toggle it on/off.

Even the taunt “attack player one” is censored

Do you want automatic censorship in lobby and ingame chat?

22 Likes
AOE shouldn't be family friendly
The Profanity Filter Breaks Chat
Illigocial censoring
Do you like how much change they are making on balance changes?
Chat filter should be a toggle
xyhe February 14, 2020, 10:44pm #8

The level of incompetence being displayed here is hilarious. What a total fiasco MS and Forgotten have produced. So glad I didn’t buy. Man you’d think this day 20 years later things could actually improved upon but instead it’s pretty much all being screwed over. They don’t care and neither should you. Let this ship sink, do not support them, don’t buy their sh!t. Such a shame!

This isn’t my thread and I’m new here so idk if you’re talking to anyone specific or just generally; however, I don’t see what value your reply adds to the thread to be honest. Since the update that caused this issue was only a few hours before the thread was opened, it is a ‘new’ issue.

Im replaying to the guy above me just like right now, I do not see nothing grammatically wrong but thanks anyways!

We’re not children, we do not need to be censored… At least let us have the option to disable it.

Seriously, just give us a button in the options to allow the choice to filter profanity. Pretty sure most of this community is 30 years old who have been playing this game since they were a child…

Please add an option to turn the censoring off, I didn’t ask for censored messages!

Now please MS, put a list on the game with the 50+ different pronouns for different genders so I can use the correct one according to the gender of my oponent.

Failing to use the correct pronoun should be a permaban + automatic call the authorities.

Also censor any word that is an adjective because they might be offensive for someone somewhere.

It’s actually funny if you think about it:

Oh man I shouldn’t have said that. Hope MS doesn’t get any ideas.

I guess it is just buggy. i wrote in one game “how many boars?” and for me it were stars. but my teammates got the message and replied. i also get a lot of star messages from teammates, so we cant communicate…

I agree with the OP.
I think there are three major problems that must be take in considerations and here are the “solutions”, imo:

I need to add the fact that language filter IS a good thing, but the way that it was implemented is a total chaos.

Thanks and best regards.

Innocuous phrases get censored which cost me the game, because apparently lobby host started a map with no sheep and I had no idea so first I write " double you tee ef, there is no sheep !? " (i have to avoid writing the three-letter acronym here out of fear now too !)…but then it became crazy as I struggled to work around the bot for half a minute because it started censoring even phrases like “what the” or “sheep” im really not sure what triggered it but i know for certain I didnt try to find a way to write profanity, but rather communicate my darn point !

anyway I just gave up after I notice a lot of time had passed and quit the game.

For the love of God let us turn this language dictator off !!!

It is sad that third-party tools, wherever available, usually do a better job all round when compared to the horrors of first-party implementations. Someone on Reddit reported that they’d been trying to flare their ally’s military that was trapped. Unfortunately, trapped was censored and his/her ally’s military (10+ knights) died.

We’ve gone from the censor being a nuisance to something that affects player performance. I need to be able to communicate with my allies without having to behave like a 6 year old in front of his parents who won’t allow him to say bad words.

the LEAST they should do is issue out a hotfix where in case of bad word you don’t get your entire message censored -but rather just the word that’s supposedly “bad”; this way you could quickly react in case you get censored and maybe other players will understand what you meant to say due to context. do this until they implement an actual turn off button for this crap !