Please do something about Ranked Team system.

Firstly, getting dodged is way too common for high level players. It’s almost every time where we have to wait 15-20mins to finally get a game. This is mainly because players can see other players before the match starts. Yes I understand why a Gold player would dodge a match against 3 Conqs (which I will address in the second point) but too often we get dodged and the other team also has 3 Conqs (maybe 2 Conqs + 1 Dia), except they have lost against us often. Dodging a game because you think the other team is better than you although you are at a similar rank seems pretty pathetic to me. These players might still leave the game after it starts for the same reason, but at least will be discouraged with their ELO dropping (yes a lot of people care about their ELO and this is NOT wrong. Actually should be encouraged for a good competitive scene).

To my second point. Match making range is way too wide. The amount of times we get matched with Gold - Plat is quite ridiculous, and I don’t blame THEM for dodging against 3 Conqs. I rather wait 7~10 mins to find one game where it is more evenly matched than get dodged 4~5 times throughout 15~20min search by Gold/Plat players. 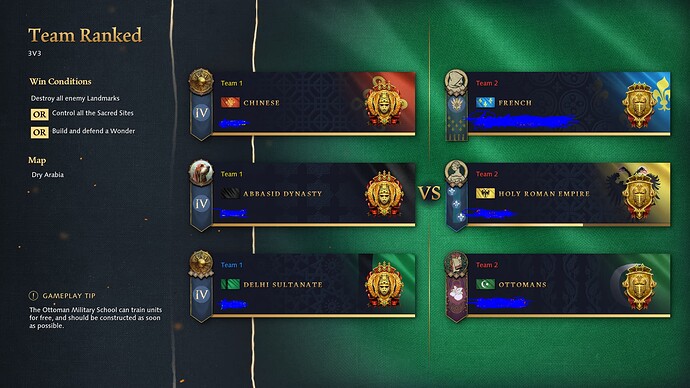 These Gold players in the picture actually didn’t dodge (we usually dodge low level players but we thought they’d dodge for sure) but this match making happens way too often.

This forum is flooding with balance complaints, but Civ choice is not as impactful as what people think they are, at least at the level lower than maybe Diamond. Most people just don’t want to admit that it’s them that are worse, hence blame it on something else (balance). Focus the development on making systems as well as UI better. Balance is pretty good (amazing considering how many civs there are, and these civs are very different from each other). Fix this match making system.

On the side note, Devs should also consider developing a better group box on the bottom of the screen and make players see all individual units rather than unit types. SC, SC2, AOE2, WC3, EVEN DOTA has it like this so players can take units out of their groups a lot easily (the one getting weaker for example). The amount of struggle a player has to go through to click a weak vill that is surrounded by 10 others is really unnecessary.

Focus your development to UI and game system. Please stop listening to these balance whines unless it is from the pro players (yes balance SHOULD be focussed at the top level), and PLEASE fix this match making asap…

Today my friends and I are still waiting to play 1 game. It’s been 30 mins since we first qued. This is sad really.

On the side note, Devs should also consider developing a better group box on the bottom of the screen and make players see all individual units rather than unit types. SC, SC2, AOE2, WC3, EVEN DOTA has it like this so players can take units out of their groups a lot easily (the one getting weaker for example). The amount of struggle a player has to go through to click a weak vill that is surrounded by 10 others is really unnecessary.

I want to complain here about an unranked team quick match game.

It was a 2v2, I solo queue’d and got a partner with 1230 2v2 rating (I’m 1180). Good match so far. But our opponents were clearly premade - they had matching names and went double mongol. I didn’t notice their rank until after the game ended but I immediately noticed that they were way better than me. Their micro was on another level, every battle in that match was more frustrating than any battle I’ve had in any match before. They beat us pretty bad and then I checked - they were both conquerer ranked in 1v1 and their 2v2 team was also ranked conquerer.

Number wise, I guess 1500 isn’t too far from 1200… but the difference in skill levels between a diamond player vs a conquerer player is astronomical. I feel like it was a bad match to put two low ranked, solo queued players against a premade team of conquerer players. There’s no rationalizing it. I understand there’s probably very few teams available in any given moment that would actually be competitive matches for them, but if I was the closest challenge that’s pretty sad.

We got dodged by CONQs about 5 times today. I hope more people become aware of this situation. Picking and choosing weaker opponents is truly pathetic and low. The worst part is that Conq 1 - 2, even 3s sometimes dodge more than diamonds. How amazing this system is, and the people that abuses it.