I think there might be a quite simple way of fixing the Janissaries. If how the systems work in the game allows for it, you could just give them negative ranged armour instead of a static weakness to ranged damage. With the calculations done and numbers set, they could receive roughly the same extra damage at the beginning from archers, not as much from other sources of ranged damage. With the armour upgrades, they would be fine later in the game, still countered by ranged damage if you, the devs, insist on that instead of a complete overhaul. They need that survivability. Also, I don’t think they should counter cavalry. I don’t think they’re gonna see a lot of use if they’re not all-rounders. If they must be anti-cavalry, then they have to be better than spearmen at it.

The Sipahi’s only problem is how Fortitude simply cannot work well with the numbers it works with. The attack speed buff only gives them a fraction of 50% damage in practice -around 7% if I recall correctly- while they receive guaranteed +50% damage. With numbers adjusted, it should be fine.

The Great Bombard’s issue also lies within the numbers. With the cost accounted for, it performs worse than both the generic Bombard and the generic Mangonel at their jobs. While performing worse than the Mangonel is understandable, I think it isn’t intended for them to be worse than the Bombard. Easy fix there, just pick if you want them to be strong and expensive or mediocre and cheap.

I don’t understand why the Sipahi is light cavalry and why it looks like the Deli. The Knight even looks like the Sipahi. Interesting choice there. You could’ve even included both of them with very miniscule unique traits. I really like the idea of the Janissary being an early Handcannoneer, since they were one of the first European standing armies with wide use of firearms, but I think they should’ve been an all-rounder with just a little weaker attack and more HP. I also like them being able to repair siege engines. Makes sense. An ideal Ottomans would have two types of Janissaries, with yataghans and with arquebuses, both of them trained at only military schools (maybe renamed to Janissary Ocaghi) at Ages II and III, respectively. That would be the most historical approach there without things getting out of hand. All of that, unchanged, is still acceptable in my opinion, but it really feels and sounds wrong that the Ottomans don’t get any kind of horse archery. An easy way to implement them at this stage would be to make the Scout unique, renamed to the Akıncı and giving them a weak ranged attack, unlocked at Age II.

Current Sipahi is Deli Cav. Deli Cav is light cav. Sipahi is heavy cav as Age of 3. There is no unit called knight Turkish military culture. Sipahi should be heavy cav.

I hear so many people talking about the Sipahi being heavy cav. I just want them to add an upgrade that gives the Sipahi a toggle between melee and range, thus working as a horse archer just like we saw in the trailers 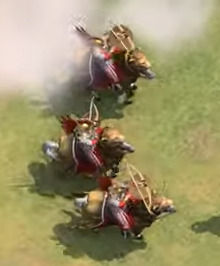 Gimme my toggle-horse-archer ability for Sipahis, god damn it relic! Otherwise yeah, turn it into heavy cav or whatever. Do something with it!

Spot on. Janissary was a tanky, disciplined, hardened all-rounder. It’s the soul and personality of the civ. They should be strong and expensive all-rounders.

Cavalries in early period of ottomans is not as heavy as Europeans, they are mostly light armored. And what the f. is Deli. Just looking to an image in wikipedia and decided already? Design of the sipahis is exactly like in the history and Deli cavalry is not well known by anyone. Even in highschool no one mentioned them in history class. No games before tried to represent them. Just one guy shared an image and thats it: “Ottomans should have Deli cavalries”. Sipahis in this game represents early periods of ottomans even pre-ottomans. A lot of images exists with same design. Do you think they didn’t research what sipahis look like?

If they made janns more expensive than HC, they were used only late games if ur eco is available. I rarely see HCs in games. If you want to make jans backbone of the ottoman army, u have to make them purchasable in early ages. Therefore devs tried to implement something different. I cant say it succeeded but making jans op is not an option if u want to see them in games.

a toggle between melee and range

Bro, it’s not my idea. Did you even look at the picture I commented? It’s taken from the god damn trailer for the two civs. It’s obviously an idea they played around with, since that’s definitely the Sipahi skin (otherwise why give it a white horse with a lion pelt AND the red crest just like the Sipahi? It’d hamper unit differentiation).

You talk like this was my idea when it was just… in the trailer. Please keep your attitude to yourself if you won’t even pay attention to what you’re reading.

oh my god, yes this was your idea, you literally wrote: “I just want them to add an upgrade that gives the Sipahi a toggle between melee and range”. There is no toggle in the trailer. You re not even paying attention what you write.

They are wrong, i’m also native. They re just looking the pic in wikipedia. Period.

Sigh, okay, let’s be extremely literal in what we write to avoid some people with no skills in reading comprehension from being confused.

Ahem. In the trailer we see what MOST LIKELY APPEARS TO BE a Sipahi using a bow in a ranged attack. For this to happen, there should be some sort of mechanic that allows for it, like a “timed ability” that would allow the Sipahi to become a horse archer for X amount of seconds, or it would have to be a toggle between ranged and melee, which to me seemed like the most plausible option of the two. It is true that these two options are my ideas to explain what we see in the trailer, but the concept of “Sipahi becoming horse archer” seems to have come from Relic as evidenced by the fact that we literally see it with our own eyes in the trailer. There is still a possibility that this isn’t actually a Sipahi but a horse archer with an extremely similar skin to that of a Sipahi that was removed from the civ before they released it in the pup.

There, I hope this helps you practice your reading comprehension skills so that in the future you can have better communication with people around you.

I read it and found it funny, bc devs never implements such broken ability. It was obviously a removed horse archer. So i gave other examples so u might see what u re wishing. I might have been clearer and explain better why it cant be but i didn’t know u have some difficulties to understand simple things.

That’s right. Sipahi is like a common name for horseman. There is also light-cav and horse archers in sipahi. Same unit exists in medieval total war 2 as kapikulu and also has light cav archer called sipahi. But i just wanted to say that deli cavs is not popular or well known. As a heavy-light pair it might be better Kapikulu-sipahi or sipahi-akinci.

Deli Cav wasnt not known by anyone? You only dont know Deli Cav. Histiorians know deli cav. They wear these lions, wings. Deli Cav is well know unit by Europeans and they were first used at 1444 and then. Game dont use Pre Ottomans, Grand Bombard were used at Conquest of Istanbul and battle of Mohac. I think you search Deli Cav and Sipahi.

I already researched this topic 2 weeks ago, but surprised it gains traction here, so here’s the images I found and why I decided the devs should rename the Sipahis to Delis.

First age landmarks are pre-ottomans, if u don’t know. Ofc i know what deli is, so the historians. I said “well known” and. “popular”. I didn’t need to search, ottoman history is taught us in high school and university. I didn’t know that deli cav is popular between europeans bc i never heard someone mentioned them. In turkey we learn nothing about them in school. Even in wikipedia article about ottoman military; they listed all units except deli cav (both turkish and english). But if you re saying we know them well, it’s ok for me. They just not an important part of the ottoman army. I think unit roster used in medieval totalwar more well known, at least for me according the history lessons.

This is also sipahi: image

Devs make feudal age land marks that belongs to Seljuks which is clearly wrong. I suggest that Ottoman buildings like Bursa Grand Mosque as land mark. Devs makes Seljuks buildings as land mark and dont give the Ottomans horse archers. This is so ironic. But that dont show that ottomans were pre ottomans. At Age 4 means 1453-1566 Ottomans were most strongest civ at its era. I live inTurkey. Sipahi was light and more light cav but it is more Deli Cav at age of 4. Knight is not unit by used Turks. But sipahi was a heavy cav used by Turks. A movie is made about Deli. You can watch it.

From my experience with the PUP, I agree with so many things with the author of post. It’s important to have the PUP so we can benefit from posts like this one. Can we still have hope? What they did with Sipahi, Janissary, GB is starting to hurt this game