as am a huge fan of age of empires series I just bought AOE IV game looks fun and can’t wait till it comes
my favorite rts game was c&c generals. I always looking for a game similar with more detailed techs and in-depth gameplay .sadly long ago they canceled generals 2
let’s think of how could be AOE V as modernize rts focusing on 20,21 century
might ages looks:- industrial - ww1 - ww2 - cold war - modern
What do you think of that?

I prefer Egypt, Greece and Rome

I think that AoE5 is much more likely to go back to the Ancient Egyptians than to go forward to WW1.

Bronze Age, Classical, Late Antiquity. There’s just so much there!

Age of empires won’t go to modern war. It is too different. If someone want to develop a modern era, they can simply use another name, like world in conflict.

I think if aoe went into anything further than 18th century it’d have a lot of trouble beating other games already doing their thing.

I think if they really wanted to differentiate going forward, they would have to either go into fantasy (Aom series) or hyper-focus on more localized history.

I doubt Age will go any further than the 1800s. It doesn’t really match the game’s style. Compare the goths from AoE2 to playing as a Vietnam war faction or the Irish during the Troubles. I think that’ll be better for a different RTS franchise.

We’ve gone from the Bronze age, to the middle ages, to the colonization and industrialization of the Americas. I don’t think it’ll go any further forward.

I wanted AoE4 to be in the XX century but now I want AoE V to go back to the V century.

Game was evolving and changing.

For some weard reason, aoe4 come break all players expectation and bring a big deal of deception.

Game is now stuck in medieval, whit only aoe2 feature.

Aoe series is now much crash down to aoe2 remake for ever.

A bunch of unrealistic figth mecanic of chess pion, that fate is chosen by a dice trow.

No kind of strategy can affect gameplay.

I just won’t buy the game any more.

It is just a dull repeat of a trow dice chess game.

I really hope that you won’t regret it, since preordering is one of the biggest scams of modern times.

A proper AoE in ancient times with bigger commitment (map rotation with new maps every few months, big social space, ingame profiles to check and design with achievments and stats to show off, ranked seasons and borders/trophies for the profile, big modability and custom lobbies, decent campaign and maybe a coop mode even).

Rn it feels like AoE plays it way too safe.
AoE4 feels really thin and slim for a 60 euro RTS “giant” the AoE franchise used to be compared to its’ competition.
Probably again just testing the waters, holding investment back and looking if people are willing to commit into it, and then patching themselfs slowly in a slightly, but not really much, better state.

All I want to see is some confidence and commitment instead of this shallow “good enough” sentiment, for any age game really.
If anything deserves it, then it’s an Age game.

When was this ever said?

Game is now stuck in medieval, whit only aoe2 feature.

When was this ever said either?

A bunch of unrealistic figth mecanic of chess pion, that fate is chosen by a dice trow.

When was this ever said? The game isn’t just random chances. No RTS is.

Idk, I think they are more likely to do an AoM 2 and potentially reboot aoe3 with aoe5

AoE V should come back to the Ancient and Classical Eras. They have rebooted the franchise from the Middle Ages just because of the huge AoE II playerbase, so now it’s the big chance for remaking the Ancient Era in a fully new 3D AoE.

Ancient civilizations would work great with the assymetric approach, and people deserve to have egyptians, romans, babylonians, assyrians, hittites, choson, greeks, carthaginians and so in a new game. Just imagine Babylon, Rome, Athens, Memphis… all with a gorgeous 3D engine. It would be incredible, and the charm of classic civs would attract a lot of people imo, specially since there are no other recent AAA RTS set in that period.

I would love to see it from the Stone Age, too. That would make it so special for the franchise, returning to its origins…

AoM2 seem more accurate to me as you can easily make civ a way more asymetric, you don’t need to chose “civilization” but “mythology” (which include more civilization, so you can be more general, like pretty much all germanique trib shared the same mythology which include north as well, same with latine mythology etc…), and you care less about historical accuracy (you can have aztek army fighting against china army with no problem) so you have less constraint.

Also, god power with the current level of graphic can be really cute ^^

Please cite your authority, because I am fairly certain you have none other than a long-debunked image in a book from 15 years ago.

The book was official, so maybe it was their plan originally, but we don’t know that for a fact. Also futuristic wouldn’t really fit Age Of Empires per say as AoE has always been based on history

I’m more curious for the citation establishing the headspace of the devs at the time they designed AoE1 to march the franchise all the way into modern times and then into the future.

Going forward with timeline is not something I want to see. Brink of XVIII/XIXth century is as far as AoE, in current format, should go imho.
Personally I’d love to see the introduction of a brand new, highly capable engine, tailored to have great destruction, weather and building systems (maybe even slight terraformation), and recreation of I - entire game set in antiquity.
On top of that - a heavy rework of the content itself. Or rather an expansion- IV is rolling on the same framework from AoE1, plus some network features and potential minor additions (coop, historical missions/challenges?). For both sp and mp modes.
Game with the potential for a decades-long lifetime should have framework that can support it. From well-thought-out player progression, lengthy campaigns with a lot of persistence, replayability etc. to very good mod tools. 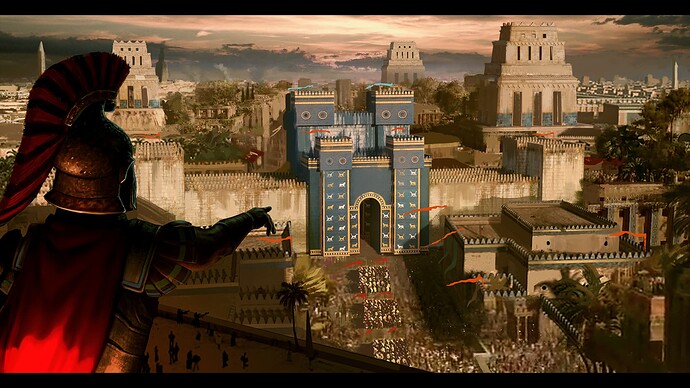 I have no idea if they wanted to at all, they had the art in an official booklet so maybe they bounced the idea around at some point. It doesn’t really matter at this point though

I don’t think there is AoE Bible, even if there was such a thing- AoE developers have been dead for years and people that worked at Microsoft, anywhere near gaming division, are also long gone.

I don’t want a remake of AoE1, just an impressive, grand RTS set in ancient times.