Issue:
The game crashes to the desktop with no errors during loading any level with Enhanced Graphics (UHD) on. If I disable UHD in settings all work fine. Tested on two different computers.

Can 100% confirm, have had very little success playing a singleplayer game with the EG pack installed and enabled, disabling it when its installed however fixes it(shocker right?)

Same on my Maschine. Immediately crashes during loading a game.

UHD is very fickle. I have 2 PC’s. On one of them it brings load times to an absolute crawl, on the other it works more or less fine, but there is some stuttering going on.

I think the main reason is the massive size of it, not only in terms of having to download 16GB, but the game also tries to load a huge chunk of it right away. I experienced on a HDD this will cause a serious bottleneck and might even crash the game, not so much on a SSD. It will also fill up your memory and pagefile once loaded off the storage drive.

Can confirm it’s still an issue, at least for me.

I’ve only been able to start a standard PvE game twice and for it to last about 10-15 minutes before crashing. Just before the crash when moving some units they turned transparent, when idle they were visible. On the plus side, I didn’t have any performance issues.

I can enter the scenario editor, but once again testing the level just cashes the game.

Haven’t been able to start any of the campaigns (after intro, on level load).

Increasing your pagefile size may be a potential solution. Doing so I was able to play through an 8 player map without any crash and load the campaign maps.

Same problem here, will try with page file increase.
Update: Page file increase confirmed as a working solution but it has to be on the same partition as the game. I managed to run UHD Test Benchmark with a score of 1152. The game uses about 11-12 GB of memory so you can adjust based on the installed memory you have. I have 16Gb installed and set the page file to 5Gb. 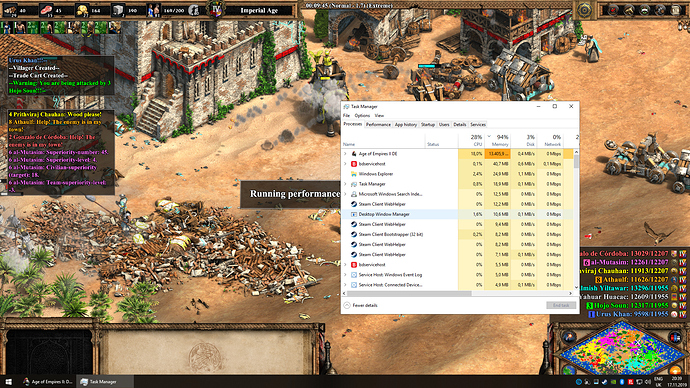 same partition as the game

Same as the game in RAM? So, for 16Gb pc memory it should be 6Gb page file?

That should fix the UHD problem. If not, try reinstalling the game.

Can anyone confirm that this is still happening after the latest patch?

I am playing the game through Steam, and have enabled the UHD Graphics Pack.

Now - it is important to note that during the BETA I was able to have the DLC enabled & run the benchmark NO PROBLEM. Even more concerning, is that since then I have even upgraded my GPU/PSU just so I could take full advantage of the UHD Graphics Pack.

I have tried uninstalling & reinstalling the game & the DLC. Is there a fix for this?

Increasing the size of the page file fixed it for me. With 16GB RAM, I set pagefile to min 8192 and max 16384. Works ok now. To check if memory (or lack thereof) is your problem, right click on the start button, click on event viewer, on the left hand side, click on windows logs and then on system, look for the date and time of your CTD and you should see a warning (with event id 2004?) that states Resource Exhaustion Diagnosis Events.

With the DLC Enhanced Graphics Pack installed, when I try to start a tutorial mission, the game crashes immediately. Without the DLC, the game is fine. I’ll try increasing my page file size (which was set to custom) and see if that helps.

UPDATE: I had my page file set to a fixed 4GB. By setting it to min 8192 and max 16384 as suggested by YuhArtyKnow it’s now working Fine! Most people should have it set to the Windows default of System Managed.

How to Change Page File Settings in Windows 10:

How to Manage Virtual Memory Pagefile in Windows 10

Thus far, this has been resolved for me by using custom settings on the page file, as someone suggested.

Some game modes still cause crashes, though. If the map is set to “Giant” or “Ludicrous”, and 6 or more people are playing, the game will eventually crash and disconnect me. This only happens on these larger maps for the time being.

This did the trick for now. Thank you!

Any idea why this is necessary?

glad it worked for you

As for why its necessary - i have no idea why the game needs that amount of virtual memory. I don’t code, have no experience of game engines and don’t wish to speculate without knowing the facts. It seems excessive and I hope that changes can be made, so that this is no longer an issue

I just know that for me at least, i would run out of virtual memory and the game would crash.

It is still an issue for me. I had to delete the UHD pack as it was impossible to play anything from campaigns or even editor (even with the UHD option disabled). After deleting the DLC everything worked fine. My PC meets requirements for UHD.