With a new unique upgrade in blacksmith/archery range. Once researched, ZGN deal +1 damage vs heavy armored units (armor ignored), for a total of 3+3 = 6 damage. The number of shots required to kill a MAA will be reduced from 40 → 20, and a knight from 64 → 32.
This addresses China’s problem being unable to fight heavy armored units in Feudal Age, while they can still be effectively countered by Horsemen.

China is considered the best or 2nd best Civ by pro players. They are not a civ that should receive a buff.

I don’t think thats a valid point anymore, at least not in the current patch. Given this low WR and the fact that China is considered OP on water map, that means they are definitely weak on land maps. Now water play definitely needs more tweaks in the future, this suggested change is a step in balancing land play.

The economic of the Chinese had been nerfed hardly, so it is not surprising that their performance has gone worse.
But damn what happened on English and HRE? I thought they should be more tough.

All in all, there is little need to change the Song Dynasty back.
It is meaningless and doesn’t help to the deformed of this civ.

ZGN are already a strong unique unit. There’s no reason for them to receive any buff. Giving them armor piercing in feudal would be hilariously OP. China is currently one of the strongest civs in the game. Taking away the ability of a few civs to pressure them in feudal with early armour units to slow down their boom is not a good idea. They have spears like everyone else vs early knights. So really this is just about early MAA from English/HRE. And if they take the risk to spend gold on a feudal MAA army, it should not just be easily countered with a single upgrade that turns a feudal unique unit that can be quickly massed at will into something of an anti-all unit.

You forgot that Song dynasty cost 400f 200g, and ZGN is also a gold heavy unit.

it should not just be easily countered with a single upgrade that turns a feudal unique unit that can be quickly massed at will into something of an anti-all unit.

It still takes 20 shots to kill a Feudal MAA with the proposed change, while the number of shots becomes 25 with Castle age upgrades. That is 2.5 times more shots than an xbow needed.
You can also counter ZGN more efficiently with mass horsemen which every civ has. Thus I find this is hardly “hilariously OP”.

massed at will into something of an anti-all unit.

ZGN is no such an anti-all unit. Everyone knows ZGN are between irrelevant to very situational from late feudal onwards. Somehow people completely forgot about French knights/HRE MAA with upgrades.

bro every +1 attack damage on them means +3 attack if the enemy forgets to get ranged armor upgrades they melt anything they also melt the horseman too fast,so conculusion even if they gave them +1 armored unit damage bonus it will be game changer because that means they will melt everything they face without a counter play(edit:they even melt buildings too)

They will always be countered by horsemen by equal resource. This upgrade is targeted at defending a MAA rush because MAA kills everything China has in Feudal age including ZGN. 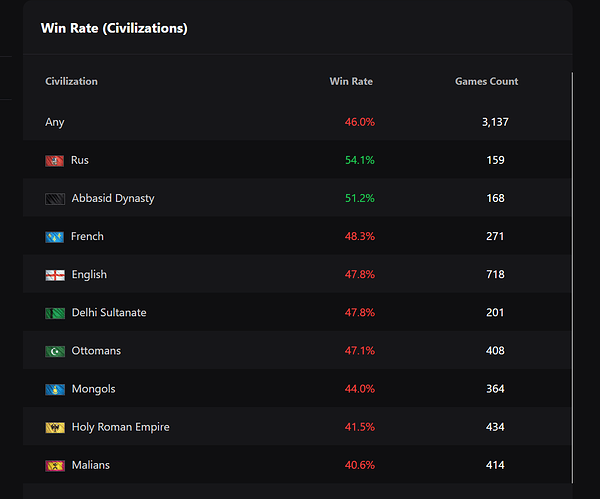 No bro, Horsemen is not heavy armored so nothing changes between them vs ZGN.

And ZGN is not OP because every civ has horsemen. They always beat ZGN cost-effectively.

What is being proposed here is that ZGN should kill MAA in the same number of shots it takes to kill a Horsemen (in feudal age) at least. The counter for horsemen is spear but currently there is no counter to MAA as Chinese.

Further thoughts, we could also give Delhi that upgrade for their archer. The Delhi vs HRE match up reflects how that could be useful for them. 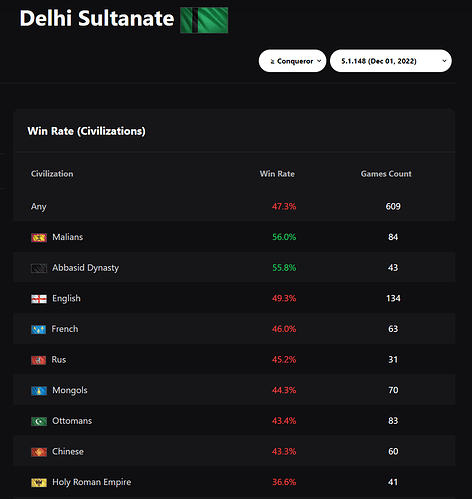 This can only mean the horsemen player doesn’t micro his unit properly. Show a single game where Horsemen loses to ZGN so we can see what he did wrong.

Don’t forget that Chinese can pump out zgn with that official guy in few seconds. So you can’t get that much horsemen in time.

China is very strong right now with their 2 tc boom in early feudal. Why is there this concern with MAA? Boosting the dominate civ in the last major tournament that is ranked ‘S’ tier by numerous top players right now sounds plain absurd.

I searched for Chinese games on AoE 4 World and looked at a few, both wins and losses, and didn’t see a single instance of them dominating with mass Zhuge Nu.

I then tried a test, running 2 instances of the game on 2 PCs. I first played for 10 mins as the Chinese player, making as many Zhuge Nu as I could by 10 minutes, getting all blacksmith upgrades. I had 22 at 10 mins. I then switched to the other player, which I used French for, and played as that player for 10 mins, making as many horsemen as I could, which ended up being 23 at 10 mins. Again, I got all the blacksmith upgrades. Then I attack moved the horsemen past the ZN, and manually controlled the ZN to hit and run, which gives little benefit due to how much faster the horsemen are. Even throwing the Chinese scout into the battle and fighting within range of a fully garrisoned Barbican, the horsemen absolutely crushed the ZN.

I had 22 at 10 mins. I then switched to the other player, which I used French for, and played as that player for 10 mins, making as many horsemen as I could, which ended up being 23 at 10 mins.

Umm, last I checked, China still gets archers. If you really hate Zhuge Nu that much, just build them instead.

China has a counter against maa in feudal. Handcannon slits.

Just play a defensive feudal if your opponent goes for maa. Usually TC and Barbican are enough, but you can even add additional towers if you’re worried about a heavy push like the Burgrave rush. Then go castle and you have plenty of options to play aggressively.

Just had 2 goes with Delhi, it’s certainly more tricky, and I think it would need a good player to improvise a near optimal build in response to what an opponent is doing. But with a couple of goes to work out a decent way to do it, I was able to have 21 horsemen at 10 minutes, including melee attack and ranged armour blacksmith upgrades. To do that I had to make the blacksmith the first building I built in feudal, building it before stables, as it’s very tight to complete 2 upgrades between getting that up and 10 minutes. I had 3 stables, and 2 mosques with 5 scholars. I think it might actually be better to build 2 blacksmiths and just 1 mosque with the 1 free scholar instead, as that will allow both upgrades to complete by 10 mins, while being cheaper than the 4 extra scholars.