The Grenadier is flagged as ‘Heavy Infantry’ (or AbstractHeavyInfantry) within the game.

This is identified as a bug for 3 reasons:

Removing this tag will allow the unit to take reduced damage from Light Infantry and take bonus damage from Asian Cavalry. 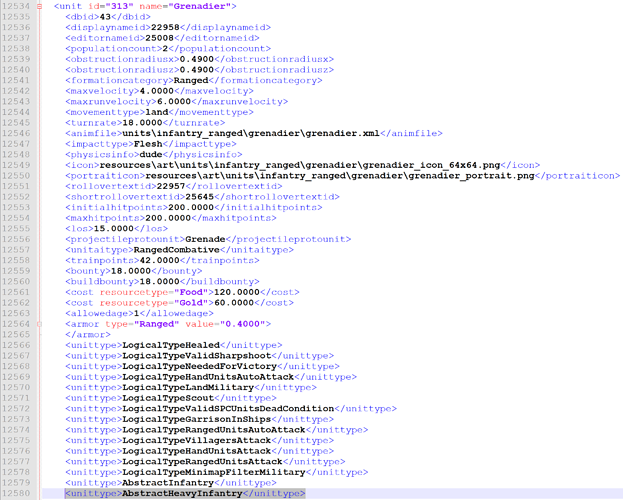 Maybe he just sacrificed his melee ability to increase the range of long-range attacks and damage, and he is still a Musketeer.

There is a card in the UK to increase the health of Musketeers and Grenadiers.
Arsenal has an add-on label “Abstract Gunpowder Trooper”

Grenadiers do not have the Abstract Gunpowder Trooper unittag. Musketeers, Skirmishers, Strelets, Janissaries, etc. do have the tag.

This is fine since that tag seems to be used for infantry units with musket/rifle style firearms, which the Grenadier does not have. Grenadiers would not logically take advantage of having Paper Cartridge or Flintlock.

Grenadiers are best used in very specific circumstances. Musketeers are designed to be a catch-all. Grenadiers are also best against buildings, and they suffer strongly when not upgraded.

Compare these stat blocks for the best Grenadier and the best Musketeer in the game, all upgrades and shipments.

20201213235858_1772×199 77.9 KB
Pit them against each other and the Grenadier comes out on top by far, and the larger you make the encounter, the more it goes in Grenadier’s favour. 2 musks vs 1 Grenadier? No problem. 200 musks vs 100 Grenadiers? Absolute massacre. Send them both on a raid against an enemy town and the Grenadiers will be barely touched by Outposts, Blockhouses, Town Centers, or War Huts and they’ll deal a heckton of damage. As you say they’re pretty bad on their own, but put a few units in front of them and they’ll wreak havoc on opposing pikes, halbs, crossbows, strelets, musks. Mix them in with your own musks for some added AoE and tankyness.

And while they usually lose to Light Infantry a group of these will wipe out a bunch of skirms caught unawares, just like skirms will do back to them, and Grenadiers do have an absolutely awful matchup against Asian Cavalry.

I think the tag works decently. I don’t agree about the implication that they should be good against cavalry because of the tag necessarily, but I can see where you’re coming from. I don’t think they’re nearly as bad as you say though. Their tradeoffs, especially the tankiness against ranged, the really long-range siege, and big area of effect, seem pretty positive to me, if used under the correct circumstances. Difficult to use well, but that’s kinda what I like about them

It seems you are making the following points:

Before we jump into this, I would like to note that the Grenadier is an Age 2 unit. Saying that it needs to be fully upgraded to work is weird in my opinion. Comparing it to other artillery available when fully upgraded makes it completely laughable. I’ll stay with your premise, but I fundamentally see this a bad space to compare in.

Let’s start with Grenadiers against buildings. You are using a specific Grenadier that is available to only 1 civilization: the British using a home city card. Even using that, the Grenadier does not do enough siege damage to outshine the Musketeer.
Grenadier: 148 Siege every 4 seconds, 2 population
Musketeer: 51 Siege every 3 seconds, 1 population
Siege per second:
Grenadier: 37 per second, 2 population
Musketeer: 17 per second, 1 population
Finally, adjusted for population:
Grenadier: 18.5 siege per second
Musketeer: 17 siege per second
That makes your building destroyers are… 8% better than Musketeers. AND you paid for ALL of the upgrades for them (the fortress, industrial, imperial, and home city upgrades). Without the BRITISH SPECIFIC CARD (still keeping the cards that effect both units from Britain), Grenadiers have 124 siege attack every 4 seconds… which gives them 15.5 siege damage per second per population. WHICH IS LESS THAN MUSKTEERS.
Now, you may argue that they can tank more than a musketeer. But 1 Grenadier has 833.33 effective HP versus ranged damage, while 2 musketeers have 1012.5. Going further with your fully upgraded argument, a fully upgraded Siege damage defensive building makes that even worse since it ignores Range resist.
They clearly DO NOT do enough siege damage to make that worth it. A comparison against Pikes/Halberdiers will bring even more depressing results.

Next is the matchup with Light Infantry:
Light infantry do bonus damage AND out range grenadiers. With the nerf to their range resistance, they cannot stand up to them. The ONLY situation where Grenadiers will win this fight is if skirmishers are out on their own and the owner does not actively walk them away from range. That isn’t a counter, or even performing well. You are counting on your opponent being bad in order for this to work.
To go back to the Musketeer comparison, the muskets in this situation could go melee and beat the Skirmishers that way. If we ignore micro, then Grenadiers STILL lose here.

Match up with Asian Cavalry:
It should be worse. Without the damage nerf, Grenadiers actually WIN against Asian cavalry with equal resources. Removing the tag means we can avoid these inconsistent damage multipliers.

I completely disagree with you analysis and outcome that the tag works. EVERY single other multiplayer, non-hero heavy infantry unit available gets a bonus on at least one attack on cavalry. All of them. Having Grenadiers be an exception to this really breaks the tag. Especially when Arsonists and Charkrams correctly do not have the tag.

In short: the tag does not work from a design perspective. And in their current state, they do not fulfil the role of building destroyer.

After a few months of patches, this bug is still persistent in the current version of the game. Grenadiers still have the AbstractHeavyInfantry tag even though they do not counter cavalry.

That’s not a bug, the grenadier have been designed to be heavy infantery from the start.
I think you make some good points here, but this should be on the main forum, and not on the bug report part.

If the Dragoon had the siege trooper tag while only having 9 siege, that would be seen as a bug right?
Or if the hussar had the Ranged Cavalry tag.

Since this is the only unit with heavy infantry that doesn’t counter cavalry (and actually has been modified to do worse against them) then the tag is a bug. It is clearly a break within the continuity of the tag and unit type.