Here is the problem I’m experiencing…
The black powder wagon, or at least the one trained from the tc, is not working for the secondary objective in the Battle of New Orleans Historical Battle.

N/A; Have only played once

Played the game, sent in some Cherokee Riflemen to secure the wagon. Got in range of the wagon but did not capture successfully capture it. Later went back and collected it, but it died on the way to the village so I built another wagon from the tc, which when brought to the native settlement did not cause any event to trigger. I made sure to bring it to the three flags area in the white target on the minimap. Paraded it around the entire village, walked over every bit of ground and touched most buildings but nothing happened.

What was supposed to happen if the bug you encountered were not present?
The secondary objective would be marked as complete, and I expect the wagon would disappear or become the property of yellow (Haudenosaunee).

What actually happened (what went wrong) because of the issue you’re reporting?
Wagon just stood there, no voice line, no sound effect, objective not marked as complete. 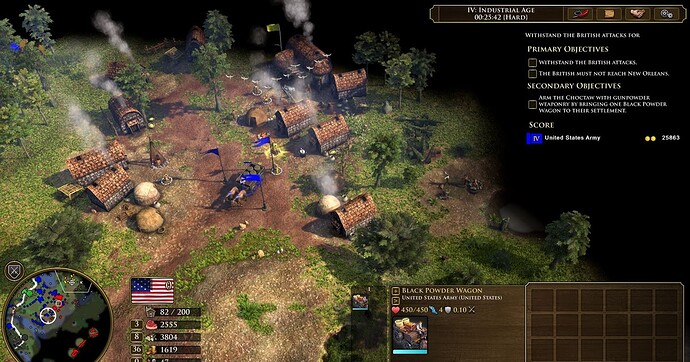 EDIT: I attempted to reproduce the issue, but this time it worked, whether I brought the captured wagon back or let it die and then train one from the tc…
I did forget to mention that the Native Settlement was partially attacked by the British in the save I experienced the issue on, with the war hut being destroyed so perhaps that was the issue… So then if you are unable to complete the objective after the war hut is destroyed, I think the objective should disappear or be marked with an X or something.

Thank you for the report! I’ve passed this along to our team for investigation; if you manage to find a way to reliably reproduce the issue, please let us know and I’ll be sure to add it to the task.