I’ve noticed that in some games Hand Calvary stands and does nothing and get’s picked off. They do not attack at all, even if I specifically target a unit they just stand and get killed. In this particular game, I was playing Russia, the Yellow player had a bunch of cannons on/off, in late game, I would train a bunch of Cossacks and send them to cannons, they would get to cannons and just stand there and die. Even if I selected a few, or all of them and specifically told them to attack the horse art, they just stood there and died. This seems to be worse when there is a 4v4 match or there are lag issues. The red player in this game also experienced this same issue with his hussars. When ever I experience this issue, I also cannot get musketeers to build forts, they will walk up to the fort to be built, and just stand there. That happened this game also.

I also recall this being an issue in legacy. I tried to record video, but for some reason I didn’t capture.

I will capture a video later and update this thread with the link.

By the way… It would be really really really handy if we could select a specific time in the record file using the slider bar at the top.

EDIT Videos of this happening are listed in new post below. 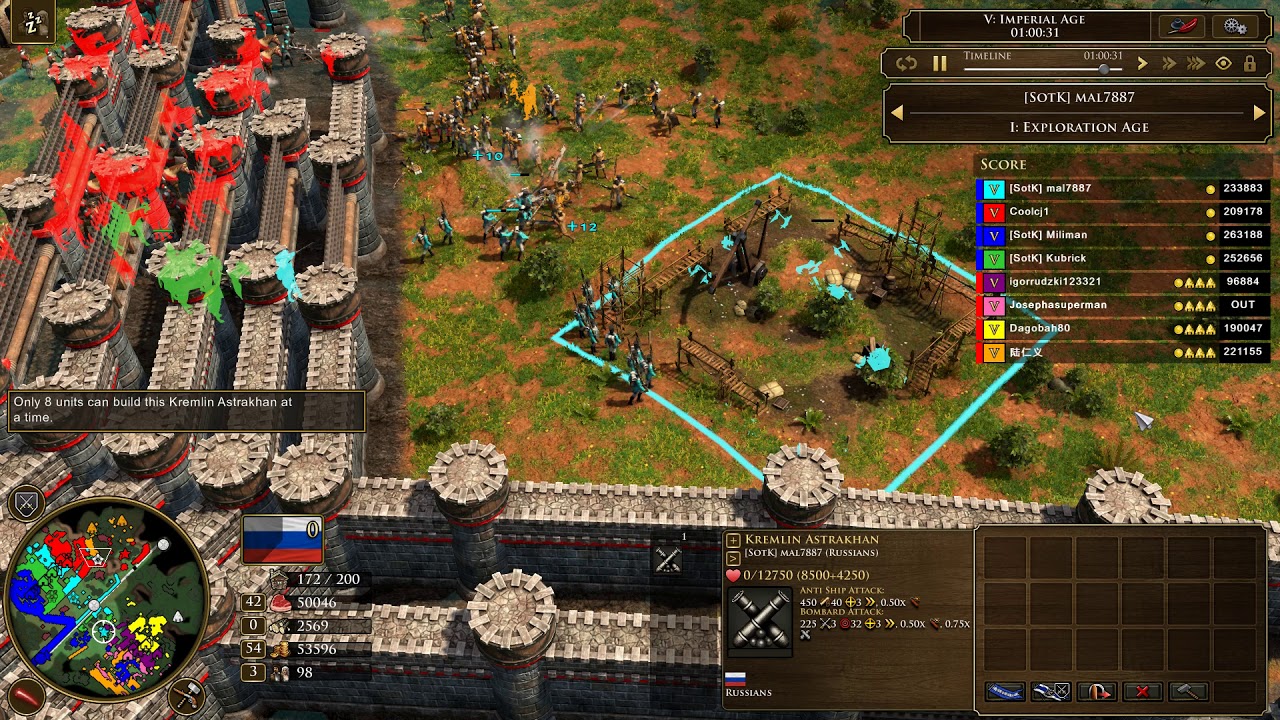 That’s due to computer lag, it happened frequently on legacy too, in this kind of team treaty situation with so many units and stuff on the map. I don’t think DE improved that issue, if anything the game is more demanding so this bug seems to happen more often

Yes, Def noticing it more lately than I did on legacy.

What’s weird is it does not happen to gunpowder units or artillery.

press command atack hotkrey , i think that would solve it instantly

pay 2000 for capitol tech of faster train on units to get instant strelets, and 100 pop even withuout houses

It does not, when this happens, they will not attack, no matter what they just stand there.

Bad advice. Attack move on melee units is bugged and it makes that issue even worse.

In fact it happen for gunpowders units too. It isn’t visible because units attack on target within their range, so range units will fire while melee units are doomed to wait that a unit pass through his melee range.
You can notice however that range unit won’t move a single step further to acquire new targets in this situation.

To take a larger picture : Settlers will also stop building or gathering not-farm like source of ressources, and sometimes even gathering from Mills and Estate kind of gathering building will bug (the one were settler have to move from spot to spot, unlike asian farms).

I reported this bug already, because I consider that the DE version should have corrected this “overload” problem in late game treaty where almost everything stop to act normally, impacting units composition (Range >>> Melee) due to technical issue, breaking balance.
In late game we don’t have to fight against our own units stopping to move / fight or build, right ?

Happy to see that I’m not alone complaining

I am hoping the devs respond to this…

This issue is being tracked by our team, thanks a lot for the information provided