I really appreciate the Hindi UI , But the font is terrible the letters are too much spaced apart

A better Hindi Typeface and font MUST be used ! I really want to play this with Hindi UI please make it playable

It just need a font change ONLY! 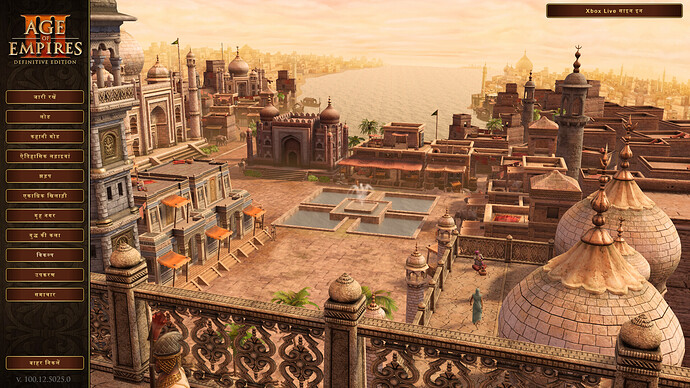 been several updates! this still was not considered! I hope this is really soon resolved

Even with patch 9476, its still illegible and not being addressed properly!

the font and typeface are still tooo inconsistent to be readable

I do not think its possible to change the Font for only 1 language. Fonts are set in the UI file, tho it would be changed for ALL languages.

Devs should make different settings for every language but not using only one setting to fit all languages, for each language has its own writing habit.

Devs should look into this problem carefully.

An example to show how one Chinese character is different in different region standards:

Yes they could should have. But you know, its an old game with an old engine, and some stuff is simply NOT DOABLE with it

Yes, I know its an old engine. But devs can add options to switch languages ingame, maybe can also add this.

There is a very very big difference between that files. What can be possible as soon as they fixed there modding ■■■■, to change the font yourself. But first they need to disable the " no mods allowed for MP" stuff

That is called half baked ! they should’ve better known to set a decent font every langguage! U simply Can’t ignore the linguistics while the whole game is solely based on Distinct characters of Civilisations!

this is a BLUNDER! The fonts is making the words Senseless and MEANINGLESS Literally! just coz it dost process the font ! the letters are getting jumbled and not making sense!

A real example from the game Hindi UI is: “Options” (Vikalp) is written as “Otpions”(Valkip) and so on!!! its an actual disaster!! 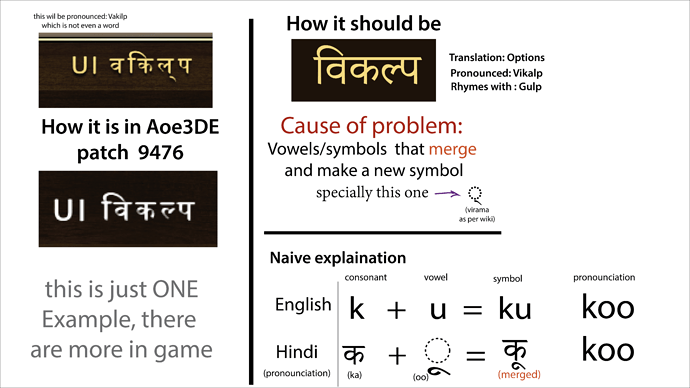 [hindi-01] @GMEvangelos apart from the mentioned issue of same word being written in written 2 ways in same patch, and wrong usage or vowels/letters, the issue of letters being seperated from each other still exits!

@GMEvangelos Been so many updates, but the hindi UI is still illegible ! if any langguage support needed Im happy to help and bring in some expertise if required! but please fix this issue.

Still hoping this to be implemented

@Ippert
Been Ages.
Still hoping to be implemented.

Sorry for the delay. We already have a ticket for this issue

probably given low priority because nobody uses it, except few people who use it for the vanity and not because they cant understand english. i tried this too but switched back to english as it was broken.