Seems like there is at decent chance that a HRE prelate/priest will come out of the town center without the ability to inspire villages automatically. You can still inspire manually, but the auto cast behavior does not work.

Basically it seems like you get at least one useless priest per game.

Unless there is a “max number of priest that can inspire at a time” that I do not know about.

The tax collector is useless too, you can afford your economy without him

I have not played the Chinese much, does the tax collector not collect gold automatically?

Gotcha, I mean you can ignore the HRE prelates completely I guess, but its a definitely a bad idea considering the boost it gives your eco.

Well, for HRE i wouldn’t ignore the Prelate. They are somehow like AoM pharaoh but more useful than the Tax Collector

Hey all, thanks for reporting. We’ve got this logged and flagged for investigation.

Your economy takes a hit not using the tax collector. He can supervise production and drop off buildings to speed up the production and the gather rate. The fact that you can use him for both is very strong albeit a lot to manage.

The Prelates frequently stop casting inspiring on your villagers. Sometimes it is fixable by garrison them in a building. It might have something to do with the fact that they cannot inspire units that are infight, so when attempting to inspire they bug out and don’t do anything anymore.

I’ve had this issue many times. I noticed that often the problem can be range. I have much better uptime by moving the prelate very close to a pack of villagers and then shift clicking to inspire one vill. The prelate will typically spam cast and won’t have issues after that.

Previously I would just cast inspire on a villager - the prelate would walk toward the villager and cast, but not attempt to spread inspiration around to villagers nearby.

That said, I still catch prelates being lazy from time to time. I think they’re unionizing or something.

I still have this issue with the prelate, have noticed it for about a week. Can’t really figure out how to replicate it but it seems to sometimes happen after moving him or manually inspiring. Not sure on that, it’s just a thought. I do know that when the bug happens it can SOMETIMES be fixed by telling him to inspire multiple villagers in a row, but that’s a lot of wasted time clicking on each villager. When I’m done, sometimes he continues like normal, sometimes he doesn’t.

When he doesn’t, then he just doesn’t work for the rest of the game, and it can be a major blow especially when he’s the first unit I build for one of my build orders, and I rely on him for rush timing.

I’ve mostly stopped using the HRE online as a result of this, as it can give me a disadvantage (early waste of 100 gold that delays Feudal Age) which I don’t like rolling the dice on. I do love the civ and would really love to continue using them, so please fix this bug soon, as it’s a pretty bad one to have.

Every few games some of my clerics will stop automatically blessing my villagers. I’ve tried manually blessing them to kick start it but itdiesnt work.

Either Im missing something or this is a hre breaking bug.

Hello! Welcome to the forums! Yes it is quite unfortunate for the HRE… however, do not worry! The devs are aware of this problem in regards to prelates randomly turning off their auto bless. Hopefully this nasty bug will be squashed in the next patch or two.

Prelate will stop casting Inspire automatically. Seems to happen after moving sometimes. You can manually cast, move the prelate around, and sometimes it will fix.

Thanks @RogueCascade987! We’ve been unable to get a repro on this one. If you (or anyone else) happens to see this a bunch, please let us know so we can investigate further.

I get this pretty much every game i play hre. I am surprised the devs cannot reproduce this. It does seem to be once the prelate has buffed one group of vills and then when you move it to another group. Either that or it does just randomly stop

Rumor has it that if the prelate is bumped/pushed by other units, then it bugs out. Garrisoning/ungarrisoning can reset the prelate to a non-bugged out state but not sure if that’s 100% reliable.

We should have a fix coming for the bump. Not sure if the Prelate failing to do his job is always related to this, however.

I don’t believe this is fixed in all cases.

In this game tonight, for example, this prelate stopped casting auto-inspire for reasons that I wasn’t able to ascertain. 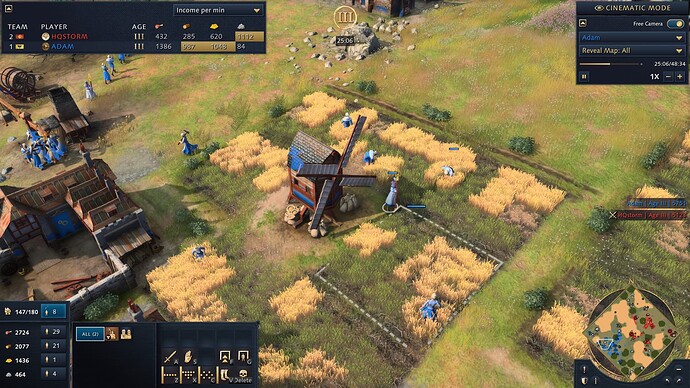